This research study involved extensive use of secondary sources which included directories and databases such as Hoovers, Forbes, Bloomberg Businessweek, and Factiva—to identify and collect information useful for a technical, market-oriented, and commercial study of the food robotics market. The primary sources that have been involved include the industry experts from the core and related industries and preferred suppliers, dealers, manufacturers, alliances, and standards & certification organizations from companies; and organizations related to all the segments of this industry’s value chain. In-depth interviews have been conducted with various primary respondents such as key industry participants, subject matter experts, C-level executives of the key market players, and industry consultants to obtain and verify critical qualitative and quantitative information as well as to assess future prospects. The following figure depicts the market research methodology applied in drafting this report on the food robotics market. 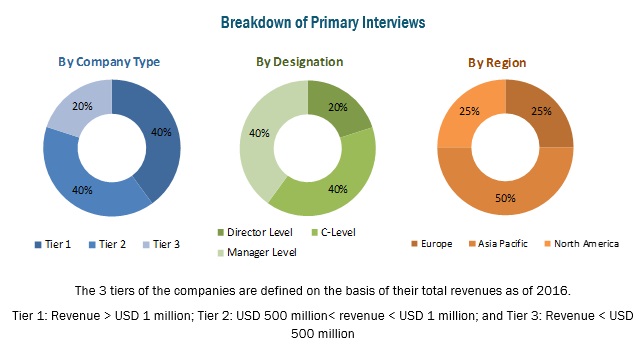 This report is targeted at the existing players in the industry, which include the following:

“The study answers several questions for the stakeholders; primarily, which market segments to focus on in the next 2 to 5 years for prioritizing efforts and investments.”

Scope Of The Report

On the basis of type, the food robotics market has been segmented as follows:

On the basis of payload, the food robotics market has been segmented as follows:

On the basis of application, the food robotics market has been segmented as follows:

On the basis of end-user industry, the food robotics market has been segmented as follows:

On the basis of region, the food robotics market has been segmented as follows:

Food robotics refers to the branch of science that focuses on the development of automated machines to perform tedious, heavy, and repetitive tasks efficiently, in the food & beverage manufacturing industry. These machines are built with the aim to replace or support manual efforts, to reduce the time & energy consumed, and eliminate errors during primary and secondary food processing. They are used to perform tasks such as palletizing, packaging, re-packaging, cutting, splitting, mixing, picking, and placing food & beverage products.

The global food robotics market is projected to reach USD 2.50 billion by 2022, at a CAGR of 12.80% from 2017. Factors such as increasing food safety regulations and the high demand for packaging & re-packaging in food production are expected to increase the demand for food robotics, globally. Furthermore, increasing instances of food contamination through human contact have encouraged manufacturers to employ industrial robots in the food & beverage manufacturing processes. The demand for food robotics is anticipated to increase in the Asia Pacific region, owing to the rapidly growing processed food industry.

With the increasing functionality of robots, more industries such as the food processing industry are adopting automation with low payload robots. Sections such as dairy and bakery in the food & beverage industry are minimizing human contact in the production process in order to comply with health authority standards. There is an opportunity for the food robotics market to grow with the increase in functionality of robots to include packaging, repackaging, and palletizing.

Limited skilled workforce is the major restraining factor for the market.

In countries where the food & beverage industry has high potential for growth—such as China, India, and Brazil—there is a skill shortage in this domain. This is because the knowledge of four to five engineering disciplines is required to become an expert in this field, and there is a scarcity of qualified faculty to train in the subjects. Moreover, there are limited branches of engineering that focus on robotics. This is a direct restraining factor for the food robotics market as the development of adequate skilled manpower is likely to be achieved only in the long run.

Most food manufacturers are reluctant to adopt automated processes due to the installation cost over and above the price of the robot. The added cost to turn the individual robots into a comprehensive robotic system, peripheral equipment such as safety barriers, sensors, programmable logic controllers (PLC), human-machine interface (HMI), and safety systems pose challenges for market growth. 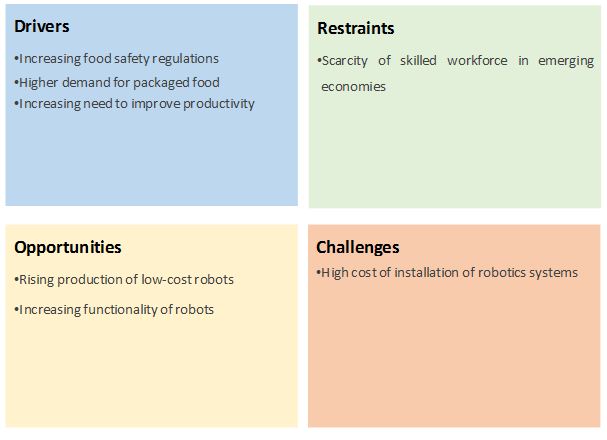 Robots can easily perform repetitive and tedious tasks with accuracy and lift large and heavy products easily. In terms of application, the food robotics market is segmented into palletizing, packaging, repackaging, pick & place, processing, and others

Palletizing refers to the process of loading and unloading large and heavy boxes and parts to and from pallets in food & beverage manufacturing and distribution facilities and warehouses. Industrial robot palletizers perform this function automatically by carrying a large range of payloads and with extended reach, thereby bringing efficiency and consistency into the entire process.

Other major applications of food robotics are packaging and repackaging. 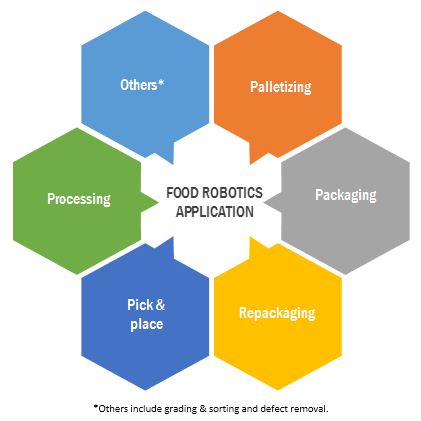 Food robotics is used in the processing of various food products including meat, poultry, and seafood; dairy; bakery; fruits & vegetables; confectionery; and others.

One of the key factors driving the demand for food robotics is the growth of the processed food sector, owing to the dependence of consumers on ready-to-eat and ready-to-cook products. The beverage industry includes the use of robotics in alcoholic and non-alcoholic beverage production. Packaging is the key function of robots in the beverage industry. Robotics are used for the packaging of beverages in polyethylene terephthalate (PET) bottles, clarified polypropylene (PP) bottles, Polyethylene (PE) bottles, glass bottles, and jars, of various capacities, sizes, and shapes.

Robots are used in the meat, poultry, and seafood industry to perform functions such as defeathering, deboning, cutting, splitting, and packaging. The demand for wash-down robots and end-of-arm-tooling (EOAT) robots in meat processing has significantly increased post the approval from the US Food and Drug Administration (FDA).

Processing of fruits & vegetables requires a controlled atmosphere due to their perishable nature; they also require quick processes to maintain their freshness and optimal quality. The industry uses robotics primarily for performing processing functions such as sorting, grading, cutting, peeling, and cleaning.

The food robotics market was valued at USD 3.01 billion in 2016 and is projected to grow at a CAGR of 5.2% from 2017, to reach a value of USD 4.08 billion by 2022. Factors such as increasing food safety regulations and high demand for packaging & re-packaging in food production are expected to increase the demand for food robotics globally. Furthermore, increasing instances of food contamination through human contact have encouraged manufacturers to employ industrial robots in the food & beverage manufacturing processes.

In terms of end-user industry, the beverages segment dominated the market in 2015. The global food robotics market is projected to grow significantly in the Asia-Pacific region, owing to the shift in the food consumption patterns of consumers and increased investments by key food & beverage manufacturers in the region. Food & beverage manufacturers focus on providing the highest quality products, keeping the production cost as low as possible. Also, the rapid turnaround is a critical factor for manufacturers. It is achieved by incorporating advanced automated technologies, which contribute to operational efficiency and increased yield.

In terms of application, the palletizing segment led the market with the largest share. Articulated robots are most widely used in palletizing application. Robotic palletizers help in reducing the operating cost and labor requirements; it also increases the turnaround time and production, alongside reducing the ergonomic issues.  These factors have been driving the demand for robotic palletizers in the food & beverage industry.

For the market in payload, the medium payload segment dominated the market in 2016. With the increase in the automation of processes in various industries, manufacturers are offering robots of different payload capacities. This is due to the high usage of medium payload robots in the food & beverage industry, which possess characteristics such as flexibility and dexterity. The low payload capacity market segment is likely to grow at a rapid pace with the high consumption of food products in smaller packs across all regions.

The Asia-Pacific region is projected to be the fastest-growing market for food robotics during the forecast period, as the consumer demands for ready-to-eat products have increased rapidly in the last decade. The key Asia-Pacific markets are Japan, China, Republic of Korea, Indonesia, Taiwan, India, and Rest of Asia- Pacific. The imports of robotics for the food sectors of these countries has increased in the last 5 years. The major factors driving the Asia-Pacific food robotics market is urbanization and the rise in disposable income of consumers, which have led to the growth of packaged food consumption in this region. 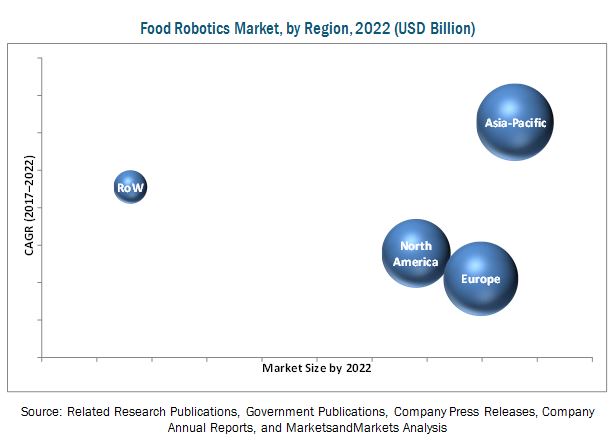 The major challenge faced by food robotics manufacturers is the high cost of installing the robotic systems. Most food manufacturers are reluctant to adopt automated processes, due to the installation cost over and above the price of the robot. The added cost to turn individual robots into a comprehensive robotic system comprises the cost of peripheral equipment such as safety barriers and sensors. Such challenges may hamper the food robotics market in the coming years.