The global LED chips market is analyzed and forecasted from 2010 to 2015.

LED chips are used in a wide variety of applications; ranging from lighting (automotive lighting, street lighting, and general illumination) to backlighting for panels in consumer electronics (such as LCD TVs, laptops, and phones). The driving factor behind the demand for LED backlighting for application in LCD screens is its quality of picture due to the higher degree of brightness and power efficiency. LED backlit LCD television sets have better brightness than CCFL television sets and ultimately deliver better picture quality. The increasing demand for cost-effective and energy-efficient lighting and a number of other factors are boosting the global demand for LED chips and therefore most of the developments in the LED chip market aim at providing more efficient and advanced products that will not only give more brightness, but also consume less power.

While conventional products are still popular in the market, their market share is going down at a rapid pace as they are not cost efficient. LED chips offer high brightness and power efficiency; and also have lower carbon emissions than traditional technologies such as incandescent and halogen lighting. This aspect has made LED lighting popular with government organizations, which are now putting LED lighting in public places and government offices.

When used for illumination purposes, LEDs are also more cost-effective than traditional lighting sources. The global LED chips market is thus witnessing an increasing demand, and companies are expanding their manufacturing capabilities to meet this demand. High brightness LED chips currently enjoy high growth as the backlighting application in TVs is shifting from traditional CCFL technology to LED technology.

The heat-sensitivity of LED chips reduces their efficiency and lifespan, especially in applications such as industrial units and manufacturing plants, where there is a high degree of ambient heat. However, ongoing R&D to improve thermal management is expected to boost the LED chip industry.

This research report categorizes the global LED Chips market on the basis of different applications of LED chips, the LED chips with different colors, and geographical analysis; forecasting revenues, and analyzing trends in the e-waste management market.

On the basis of applications

The different types of applications covered in the report are backlighting, illumination, signs, and signals.

On the basis of colors

On the basis of geography

North America, Europe, Asia-Pacific, and ROW are covered in the report.

The global LED chips market is currently witnessing a high demand owing to the new applications such as LCD backlighting and illumination. Companies are expanding their manufacturing capabilities to meet with the demand. The emission of carbon from the LED chips-based lighting is comparatively less as compared to the competitive technologies such as incandescent and halogen lighting. This aspect has made LED lighting popular with the government organizations, which are now putting LED-based lighting in public places, government offices, and streets.

Environmental concerns are driving the need for green and low-power-consuming lighting systems and therefore most of the developments in the LED chip market aim at providing more efficient and advanced products that will not only give more brightness, but also consume less power. The major players in this market include Cree Inc. (U.S.), Epistar (Taiwan), Nichia (Japan), OSRAM Opto Semiconductors GmbH (Germany), and Philips Lumileds (U.S.). 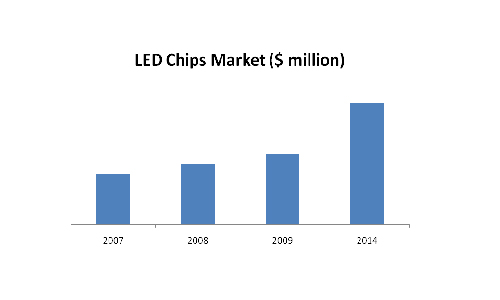