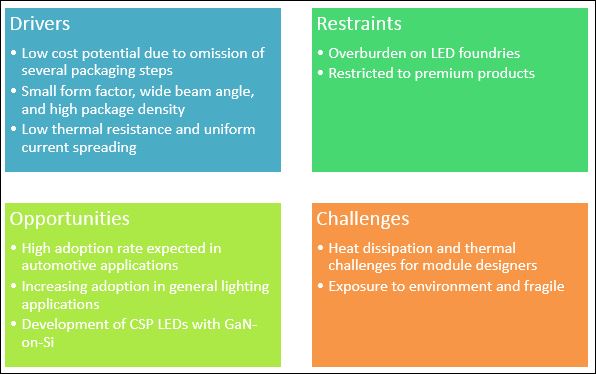 Traditional LEDs usually undergo from the chip/die manufacturing to packaging processes where the die would be attached to an interposer such as a ceramic substrate, yielding a packaged LED or what is commonly referred to as an LED package. In the case of CSP LED, separate steps of having manufactured chips going through a packaging line are eliminated because at the die-level itself the chips are singulated and coated with phosphor. Solder or bond pads are installed at the wafer level just after the epitaxial stage of manufacturing using semiconductor etching and metallization techniques. CSP LEDs become ready for installation on a PCB after the wafer is diced. With no substrate and alloy/bonding wires to solder, CSP LEDs effectively omit production processes, which reduce the probability of making defective products. With several of the packaging steps omitted vis-ŕ-vis a traditional LED package, the cost potential of a CSP LED is significantly lower, with a low bill of materials.

The research methodology includes the use of primary and secondary data. Both top-down and bottom-up approaches have been used to estimate and validate the size of the market, as well as the other dependent submarkets. Key players in the market have been identified through secondary research. Secondary sources include references such as annual reports, company press releases, Factiva, and investor presentations of companies; white papers, consumer electronics exhibitions, certified publications; websites; directories; and databases. All the percentage shares and breakdowns have been determined by using secondary sources and verified through primary sources. All possible parameters that affect the markets covered in this research study have been accounted for, viewed in extensive detail, verified through primary research, and analyzed to get the final quantitative and qualitative data. The breakdown of the profiles of the primaries has been depicted in the figure below. 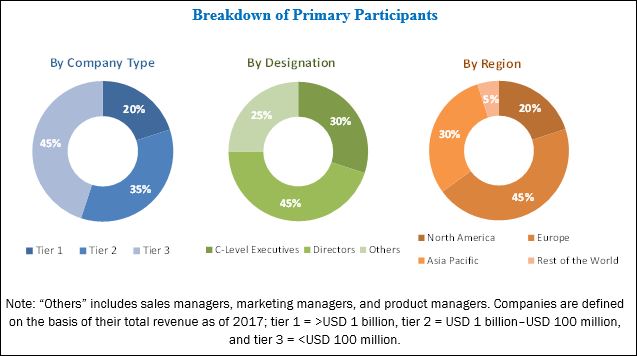 “The study answers several questions for the target audience; this primarily includes the market segments to focus on over the next 2 to 5 years for prioritizing efforts and investments.”

In the report, the market has been segmented on the basis of:

Detailed analysis of major companies in the market

Chip-scale package (CSP) LEDs are the latest trend in the LED package market. According to IPC's standard J-STD-012 (implementation of flip chip and chip scale technology), to qualify as chip scale, the package must have an area no greater than 1.2 times that of the die, and it must be a single-die and direct surface mountable package. As of 2017, CSP LEDs have only penetrated 4% in the global LED package market valued at USD 16 billion in 2017; with low-cost potential and attractive features, CSP LEDs are expected to penetrate about 10% of the total LED package market by 2023.

The CSP LED market is estimated to be USD 757.7 million in 2018 and is likely to reach USD 1,744.8 million by 2023, at a CAGR of 18.2% between 2018 and 2023. The shipment of CSP LEDs is expected to cross more than 15 billion units by 2023, at a CAGR of about 30% during the forecast period. The low-cost potential of CSP LEDs with a low bill of materials, which is because of the manufacturing process, where several packaging steps are omitted, is a major factor driving the growth of the market. Small form factor and wide beam angle due to high-package density coupled with low thermal resistance and uniform current spreading are other factors that are contributing significantly to the adoption of CSP LEDs in different applications.

The display backlighting application is expected to dominate the market, in terms of market size, during the forecast period, as it is pulled by the demand for energy efficient and compact backlighting sources for TV, monitor, and smartphone displays. The adoption of CSP LEDs in general lighting and automotive applications will play a crucial role in the growth of the market during the forecast period. Demand for CSP LEDs is expected to increase rapidly in next 5 years mainly from automotive and general lighting segments, and these two applications will provide tremendous growth opportunities to CSP LED manufacturers.

The market for automotive is expected to grow at the highest CAGR during the forecast period. There is negligible adoption of CSP LEDs in the automotive segment, majority of which is in replaceable headlights that are being supplied by local/regional vendors by utilizing CSP LEDs from manufacturer like Seoul Semiconductor. Though the market size for CSP LEDs in the automotive segment is very small currently, it is expected that demand for mid- and high-power CSP LEDs will increase exponentially 2018 onwards when automotive manufacturers and automotive lighting suppliers start adopting CSP LEDs for new installations. 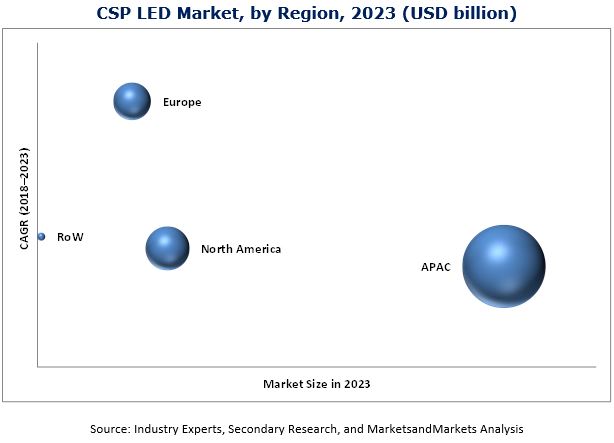 APAC accounted for largest demand for CSP LEDs mainly due to the presence of leading CSP LED manufacturers and customers (i.e. smartphone vendors, backlighting panel integrators, and display panel manufacturers) spread across countries such as South Korea, China, Japan, and Taiwan. The market witnessed high demand from display backlighting, mobile flash, and other applications in APAC. CSP LEDs reduce the total number of LEDs required per backlighting panel, along with the form factor of the BLU. The growth in APAC will also be driven by the rise of newer CSP LED applications in general lighting and automotive.

Overburden on LED foundries and so far adoption only in premium products are restraining the growth of the market. Heat dissipation and thermal challenges for module designers pose a major challenge to the market. Samsung is focused on the development of CSP LEDs with GaN-on-Si, which can further reduce the cost of CSP LEDs for different applications and offer strong competition to traditional LED packages. Such developments are major opportunities for CSP LED manufacturers to grow in the market.