The global milking automation market size is estimated to be USD 1.0 Billion in 2022 and is projected to reach USD 1.5 Billion by 2027, at a CAGR of 7.4% during the forecast period. 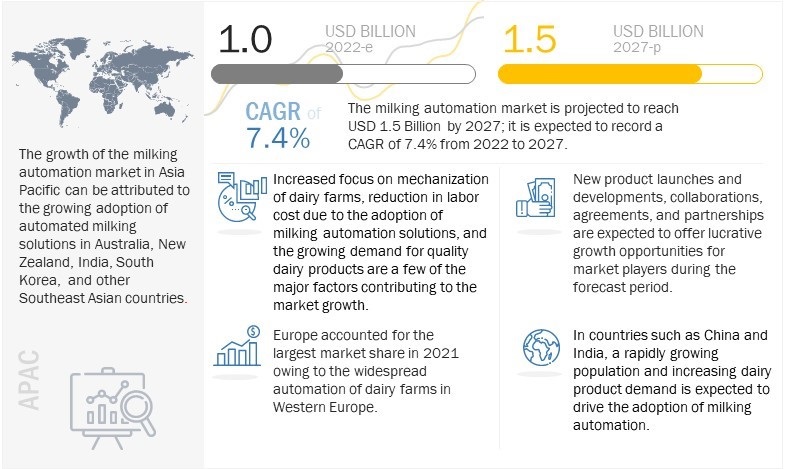 The consolidation of dairy farms, mainly in developed regions, has driven the adoption of milking automation solutions. The increasing average herd size of dairy cows, particularly in countries such as the Netherlands, Australia, New Zealand, and the US, has led to the installation of a large number of milking points and the integration of additional electronic components, such as milk analyzers, sensors, and smart pulsators, on dairy farms.

In most advanced dairy-producing regions, the increase in average herd size and difficulty retaining staff have threatened the industry's long-term viability. These issues are resolved by adopting technologically advanced milking equipment and the automation of milking parlors.

In the last decade, the number of dairy farms has reduced significantly owing to the increased average herd size, and the milk yield per cow has increased due to the adoption of automated solutions. According to Dairy Australia, the number of dairy farms declined by approximately 57% between 2002 and 2021. However, during this period, the average milking herd size increased by almost 50%, that is, from around 200 heads to 295 heads.

The use of milking automation devices, such as smart milk meters, pulsators, and milk point controllers, can maximize herd performance and milking productivity, maintain the health and well-being of farm animals, reduce labor costs, and ensure high profitability and sustainability.

Dairy milk production has raised concerns about animal welfare and the environment, which is driving consumers to seek alternatives. This will hamper global dairy milk production, thereby impeding the growth of the milking automation market.

According to Univar Solutions (US), in 2020, the demand for plant-based milk is growing by more than 10% yearly, while dairy milk is growing at a rate of 3% annually. Plant, grain, and nut milk currently comprise over 10% of the total milk market. Milk substitutes have already seized market share and now make up 13% of retail milk sales in the US, in which almond milk has the greatest share among the substitutes.

Governments of different developing countries have facilitated the integration of AI, robotics, and IoT technologies with conventional milking systems and are running various initiatives to promote the adoption of automated milking solutions, creating growth opportunities for market players in the region. For instance, governments of countries such as Indonesia, South Korea, India, and Columbia support dairy farmers by providing incentives and subsidies for automating their dairy farms.

Challenges: Lack of skills and limited understanding of technology among farmers in developing regions

Other factors hamper milking solutions adoption in dairy farms are the high cost involved in automating farms, the lack of technical knowledge, and reluctance toward using new technology owing to limited skillset and understanding. In addition, since the milking system operates 24/7, technical support is essential.

Due to breakdowns during milking activity, the herd and delicate sensors are at risk of being damaged, incurring additional repair costs. Market players are likely to witness this challenge for a considerable period owing to the poor economic condition of many countries and the lack of infrastructure and awareness about the benefits of automated milking equipment.

The dairy cattle will lead the market during the forecast period. When compared with other dairy animals, cattle have several advantages, including ease of milking, large udder size, higher ability to store milk, and milk yield. Because of these advantages, majority of the dairy farmers prefer dairy cattle over other milking animals, as a result, most companies in the market design milking systems specialized for dairy cattle only.

The world's milk production is dominated by cattle milk. India, Brazil, China, and Pakistan are the four countries with the most dairy cattle, and the United States and India produce the most cow milk. There is a decline in cow milk production in developed countries, along with a decrease in dairy operations and animals, but productivity per cow is increasing.

In developing countries, both the number and production of lactating cows are on the rise, but their animals have lower milk yields and shorter lactation periods. Climate (high ambient temperature, humidity), low-quality feed, low levels of nutritional supplement intake, the low genetic potential for milk production in multipurpose animals (used for both milking and farming), as well as high disease incidences are just a few of the factors contributing to poor animal performance in small-scale dairy systems in developing countries.

Based on offering, the market has been segmented into hardware, software, and services. The hardware segment has been further subsegmented into milk meters, milking clusters milk point controllers, pulsators, smart feeding robots (TMR/PMR-based feeding robots), smart camera-based facial recognition systems (biometric ID), and other hardware components such as automated weighing, and sorting systems.

Milking automation solutions are increasingly being adopted as automated hardware and systems are becoming more popular. Dairy farms across the world are increasingly installing mechanized milking solutions such as pipeline milking systems and milking machines on dairy parlors. With the help of milking automation hardware components such as milk meters, pulsators, milking clusters, milk point controllers, milk analyzers, and sensors, dairy farm owners can reduce labor costs and increase milk yield per ruminant. Moreover, the increasing awareness about the quality of milk is expected to fuel the demand for milk metering solutions for dairy farming during the forecast period.

Asia Pacific is likely to be the fastest growing market between 2022 and 2027. 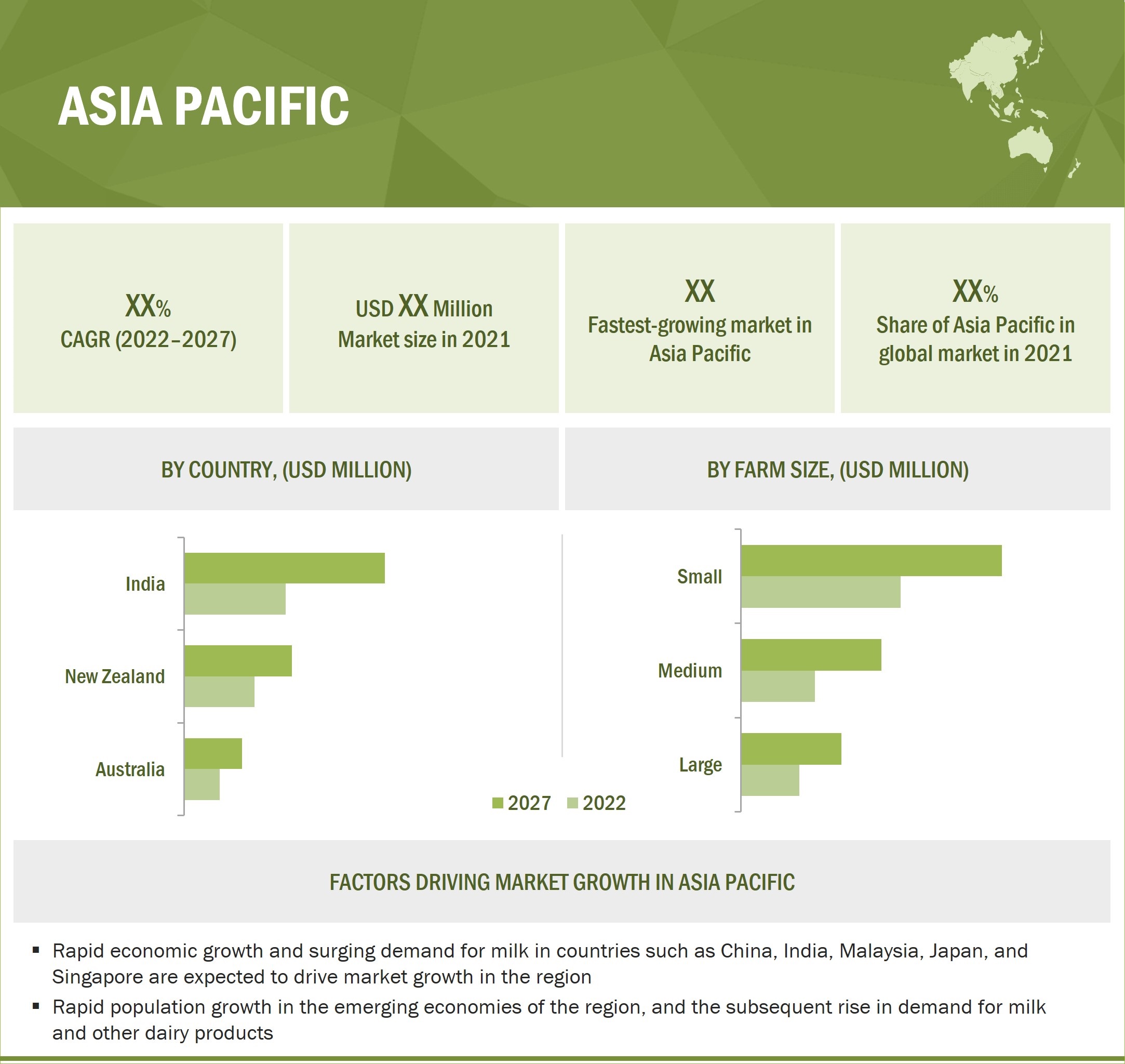 Asia Pacific is expected to witness the highest growth rate for milking automation market during the forecast period. Rapid economic growth and surging demand for milk in countries such as China, India, Malaysia, Japan, and Singapore are expected to drive market growth in the region.

This research report categorizes the market, by offering, farm size, species, and region available at the regional and global level

Who are the key players in the milking automation market? What are the major growth strategies they had taken to strengthen their position in the market?

What are the new opportunities for emerging players in milking automation value chain?

The growing demand for milk and dairy products, increasing per capita income of farmers in developing countries, rising herd size, and growing focus of governments on dairy farming and agriculture industries are expected to create a surge in the adoption of mechanized milking solutions in small-to-medium dairy farms.

Which Region to offer lucrative growth for milking automation Market By 2027?

It is expected that Europe will lead the milking automation market due to the presence of large dairy farms and high labor wages in the region. In contrast, the Asia Pacific region is expected to see the highest growth rate between 2022 and 2027.

How is competitive landscape for milking automation market?

The study involved four major activities for estimating the size of the milking automation market. Exhaustive secondary research has been carried out to collect information relevant to the market, its peer markets, and its child market. Primary research has been undertaken to validate key findings, assumptions, and sizing with the industry experts across the value chain of the milking automation market. Both top-down and bottom-up approaches have been employed to estimate the complete market size. It has been followed by the market breakdown and data triangulation methods to estimate the size of different segments and subsegments of the market.

In the secondary research process, various secondary sources have been referred to for identifying and collecting information relevant to this study on the milking automation market. The secondary sources included annual reports, press releases, and investor presentations of companies; white papers, certified publications, and articles by recognized authors; directories; and databases. Secondary research has been mainly carried out to obtain key information about the supply chain of milking automation, the value chain of the milking automation ecosystem, the total pool of key players, market classification and segmentation according to the industry trends, regional markets, and key developments from both, market- and technology-oriented perspectives.

Extensive primary research was conducted after understanding and analyzing the milking market scenario through secondary research. Several primary interviews were conducted with key opinion leaders from both the demand-side and supply-side vendors across the 5 major regionsóNorth America, South America, Europe, Asia Pacific, and Rest of the World (Africa and the Middle East). Approximately 15% of the primary interviews were conducted with the demand side and 85% with the supply side. This primary data was collected mainly through telephonic interviews, which consist of 90% of total primary interviews; however, questionaries and emails were also used to collect the data.

Primary data has been collected through questionnaires, emails, and telephonic interviews. In the canvassing of primaries, various departments within organizations, such as sales, operations, and administration, were covered to provide a holistic viewpoint in our report. After interacting with industry experts, brief sessions were conducted with highly experienced independent consultants to reinforce the findings from our primaries. This, along with the in-house subject matter expertsí opinions, has led us to the findings as described in the remainder of this report.

The total size of the milking automation market has been estimated and validated using both top-down and bottom-up approaches. Furthermore, these methods have also been used extensively to estimate the size of various subsegments in the market. The research methodology used to estimate the market size is as follows:

After arriving at the overall market size from the market size estimation process explained above, the total market was split into several segments and sub-segments. To complete the overall market engineering process and arrive at the exact statistics for all segments and sub-segments, data triangulation and market breakdown procedures were employed, wherever applicable. The data was triangulated by studying various factors and trends from both the demand and supply sides. Along with this, the market was validated using both top-down and bottom-up approaches.

With the given market data, MarketsandMarkets offers customizations according to the companyís specific needs. The following customization options are available for the report: