[154 pages report] The plant growth regulators market was valued at USD 1.98 billion in 2016 and is projected to grow at a CAGR of 6.8% from 2017, to reach USD 2.93 billion by 2022. The base year considered for the study is 2016, and the forecast period is from 2017 to 2022. Plant growth regulators control or regulate a plant’s growth processes, including the formation of leaves and flowers, elongation of stems, development and ripening of fruits. The global market size has been segmented on the basis of type, crop type, formulation, function, and region. This report also helps us to understand the structure of this market by identifying its various segments. The objectives of the report include analyzing the opportunities in the market for stakeholders, providing the competitive landscape of market trends, and projecting the size of the market and its submarkets in terms of value and volume.

The organic food industry has been gaining popularity since the last decade for the high premium value achieved by the farm produce. Organic farming is one of the fastest-growing industries, worldwide. In Europe, organic farming developed into a strong market for plant growth regulators. According to Research Institute of Organic Agriculture (FiBL) 2013, the organic farmlands in Europe accounted for 27% of the global organic farmland of 43.1 million hectares. The use of plant growth regulators is projected to increase the profit margins of high-value fruits & vegetables. Permanent organic croplands, utilized mostly for the cultivation of fruits, cocoa, coffee, and other cash crops, accounted for 7.4% of the global organic agricultural land in 2013.

According to data published by the Organic Trade Association (OTA) for the US organic sales, “organic fruits & vegetables retained its longstanding spot as the largest of all the major organic categories with sales of USD 14.4 billion in 2015, up by 10.5% from the previous year. The demand for fresh organic food was the most evident in the continued growth of fresh juices and drinks, which witnessed a growth rate of 33.5% in 2015, making it the fastest-growing of all the organic subcategories. The fastest-growing of the eight major organic categories were condiments, which crossed the USD 1 billion mark in sales for the first time in 2015, at a growth rate of 18.5%.”

According to the US Department of Agriculture (USDA), consumer demand for organically produced goods continues to show double-digit growth, and sales of organic products were valued at USD 28.4 billion, constituted over 4% of the total US food sales in 2014.

To improve fruit ripening, leaf ripening, and seed propagation, the agricultural practice involving the use of natural growth regulators has been gaining strong demand in the cultivation of organic fruits and cash crops.

Organic farming is also estimated to benefit from subsidies, financial aids, and R&D programs by government authorities (APEDA, India); organic certification agencies such as INDOCERT (India) and OCIA (Organic Crop Improvement Association, US); and non-government organizations such as FiBL (Switzerland) and USDA (US) to support conventional farmers to switch to organic farming.

The approval process of plant growth regulators is very lengthy, due to multi-location field trials and residual effects. Due to the stringent regulatory approval process, the average time taken to bring a new crop protection product to market can exceed 10 years and cost more than USD 100 million. The patent protection and exclusivity are critical in helping companies recover the costs of research & development, incentivizing them to make future investments that will lead to continued industry-wide growth. Increased costs due to product development and greater regulatory time period led to increase in retail prices, which again reduced the net profit value for growers. The decreased profit margins cannot help in improving the share of plant growth regulators in the global agrochemicals market.

Even for the generic products, it can take up to five years to get the product registered. The regulatory bodies do not have adequate resources and infrastructure to execute timely registration of products. At times, the rules are not clearly defined, creating interpretation challenges for the regulatory bodies, leading to confusion, thereby adding to the complexities for the crop protection chemical companies.

Rise in investment in agricultural activities in developing countries

Agricultural production requires expenditure on inputs, in order to optimize the output from a particular cropping cycle. These expenses pertain to the cost of buying seeds, agrochemicals, machinery, and other miscellaneous expenses. In case of relatively smaller farm sizes, it is not feasible to optimize the production based on productivity enhancing inputs, as this involves costs that farmers are unable to bear. In the developing economies of Sub-Saharan Africa and South Asia, the investment made in agricultural activities is not adequate, resulting in sub-optimum production, in terms of quality and quantity. This phenomenon has its implications on the overall food security and the standard of living of the population engaged in the primary sector.

Emerging markets such as India and Brazil have strong production of fruits & vegetables and cotton, respectively. These markets not only boost the growth of plant growth regulators in high-value crop segments, but can also improve the growth in high-volume crops such as cereals and oilseeds. The cost effectiveness is not suitable in these countries for growers to utilize plant growth regulators during the cultivation of cereals and oilseeds.

By prioritizing domestic food security, several countries in the Middle Eastern region, and even China, have taken up the unutilized arable land in the Sub-Saharan region for agricultural activities. To subsidize food products, Gulf countries and some Asian countries have initiated national programs to acquire farmland around the world to secure food production.

Thus, with the increase in investments in the agricultural industry, farmers have increased access to various plant growth regulators, owing to availability of better financial resources.

Lack of awareness regarding benefits of PGR

According to the Yale Environment 360 magazine, published by Yale School of Forestry & Environmental Studies and Yale University in 2015, farmers are still in the practice of following the conventional agriculture system and are focusing on the usage of fertilizers and chemicals, as against to looking for new solutions to eradicate pests and harmful microbes; these solutions need dedicated supply-side efforts to spread awareness among farmers.

Organic farming is a complex process and the growers need to have a very high level of skill & knowledge related to this niche market to achieve the desired effect and result, however, there has been limited exchange of organic farming techniques among farmers in developing regions. Hence, a lack of awareness about plant growth regulators poses as a challenge for plant growth regulators providing players as well as the market. This can be overcome with the help of the right distribution channel to spread the awareness among farmers.

This report includes estimations of the market size in terms of value (USD billion) and volume (KT). Both the top-down and bottom-up approaches have been used to estimate and validate the size of the global plant growth regulators market and to estimate the size of various other dependent submarkets in the overall market. The key players in the market have been identified through secondary research. These include press releases; paid databases such as Factiva and Bloomberg; annual reports; and financial journals. Their market share in respective regions has also been determined through primary and secondary research. All percentage shares, splits, and breakdowns have been determined using secondary sources and were verified through primary sources. The figure below shows the breakdown of profiles of industry experts that participated in primary discussions. 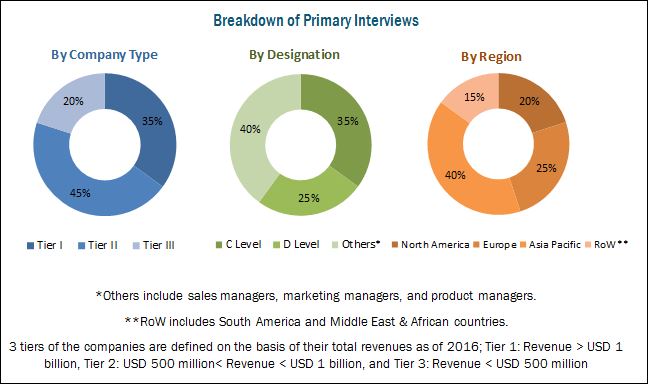 The leading players in the plant growth regulators market are considered for this study. A brief description of the companies and their products are mentioned in the company profiles. Detailed insights about the key strategies and recent developments adopted by these companies to attain a strong position in the market are also provided. The key players that are profiled in this report include BASF (Germany), Dow Chemical (US), Syngenta (Switzerland), FMC Corporation (US), and Nufarm (Australia). Other players include Bayer CropScience (Germany), Nippon Soda (Japan), Tata Chemicals (India), Valent Biosciences (US), Xinyi Industrial (China), ADAMA (Israel), Arysta LifeScience (France), Sumitomo Chemical (Japan), and WinField Solutions (US).This report is targeted at the existing industry players, which include the following:

“The study answers several questions for stakeholders; primarily, which market segments to focus on for the next 2 to 5 years for prioritizing efforts and investments.”

On the basis of type, the market has been segmented into:

On the basis of crop type, the market has been segmented into:

On the basis of function, the market has been segmented into:

On the basis of formulation, the market has been segmented into:

On the basis of region, the market has been segmented into:

With the given market data, MarketsandMarkets offers customizations according to the company-specific needs.

The plant growth regulators market is projected to grow at a CAGR of 6.8% from 2017, to reach a value of USD 2.93 billion by 2022. The global demand for plant growth regulators is increasing significantly due to the growing demand for organic food. The market is further driven by factors such as rise in the need for food security for the growing population, advancement in farming practices and technologies, and high opportunities in developing countries.

On the basis of type, the global market was led by the cytokinins segment in 2016. Cytokinins provide benefits such as delayed plant aging and prevention of leaf senescence. Cytokinins are applied in a higher concentration during the growth period of mature plants. Cytokinins also find wide usage in the North American and Asia Pacific countries.

The plant growth regulators market, on the basis of crop type, is segmented into fruits & vegetables, cereals & grains, oilseed & pulses, and turf & ornamentals. The fruits & vegetables segment accounts for the second largest market share; this can be attributed to the growing health-consciousness among consumers and their rising income levels.  In North America and Europe, growing health concerns are driving the demand for fruits and vegetables, as consumers prefer healthier and more nutritious diet options.

Europe and Asia Pacific are the dominant regions in the plant growth regulators market. The major countries contributing significantly toward the growth of the Asia Pacific region include China, Japan, India, and Australia & New Zealand. The increasing demand for organic food is further expected to boost the market. 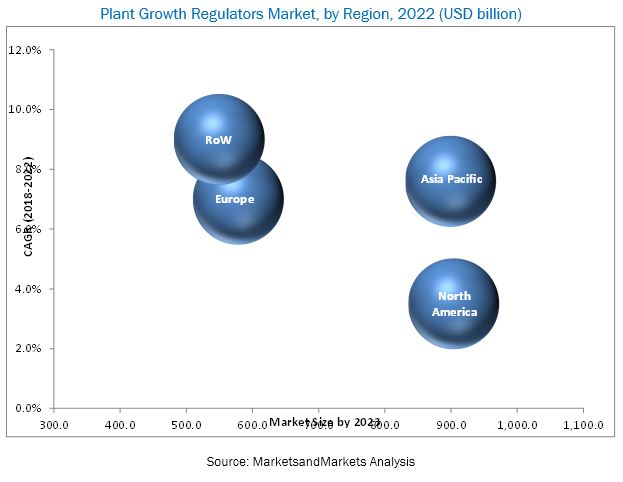 The major restraining factor for the plant growth regulators market is the long gestation period for new products.

The demand for organic products is projected to provide a strong platform for the entry of seaweed-based plant growth regulators. With increasing environmental regulations and residue level monitoring of pesticides, these new ranges of natural plant growth regulators can enhance the market growth. However, the market has been highly dependent on the fruits & vegetables segment.

Companies such Syngenta (Switzerland), BASF (Germany), The Dow Chemical Company (US), Bayer CropScience (Germany), Nufarm (Australia), and ADAMA (Israel) together account for more than half of the total share of the plant growth regulators market. These companies have a strong presence in Europe and the Asia Pacific region. They also have manufacturing facilities across these regions and a strong distribution network. They are also focused on innovation and are geographically diversified. These market players are focusing on new product launches with existing and new materials to increase their efficiency. FMC Corporation (US) and Valent BioSciences Corporation (US) are some of the leading market players that adopted this strategy to develop their business.

We need information on unique PGR product not being used in India and manufactured internationally. Is this information covered in the report?