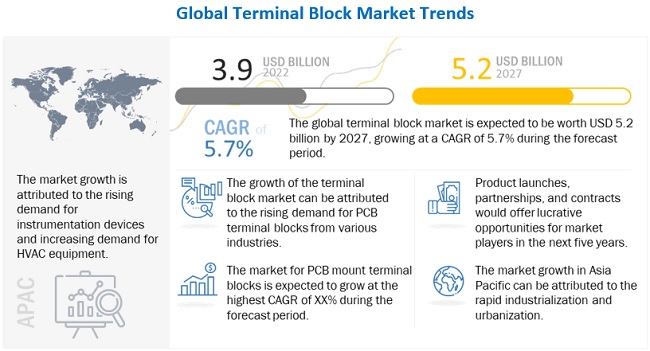 RESTRAINT: Difficulty in selecting right terminal block according to applications

A terminal block enables connectivity between multiple wires and circuits, and the connections are enclosed in an insulated housing. It is the backbone of automation and electrical control systems. Since terminal blocks are used in various applications, such as industrial controls, lighting controls, and power distribution systems, they come with different types of wire termination connections. Similarly, terminal blocks that find applications in power supplies, HVAC systems, signal transmissions systems, etc., require different types of terminal connections, such as screw-type, spring cage, insulation displacement connection, and cable lugs and connectors.

Surface-mount technology (SMT) is a method for producing electronic circuits in which components are mounted or placed directly on the surface of printed circuit boards (PCBs). An electronic device powered by SMT is called a surface-mount device (SMD). SMT uses an assembly process wherein the components are joined on the surface of the board rather than inserted into holes running through the board. In the industry, through-hole technology for fitting components with wire is replaced with SMT. The manufacturing process for SMT is much more sophisticated than through-hole technology.

Asia Pacific accounted for a share of more than 30% of the terminal block market and is expected to witness the highest CAGR during the forecast period. Increased industrialization in the region, particularly in developing countries such as China, India, and Indonesia, is the major factor boosting the market growth. Further, it helps avoid non-compliance with strict environmental laws in developed countries, build good ties with other countries, and get market access. The strong focus of regional companies from the consumer electronics and automotive sectors to produce reliable and quality products using automation tools creates the need for terminal blocks for several applications in these sectors. 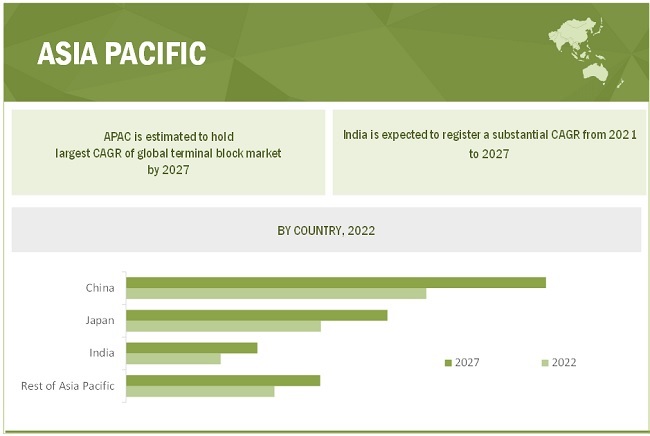 This research report segments the terminal block market based on type, industry, classification of terminal blocks according to their structure, function type, and connection type; mounting type, and region.

By Classification of Terminal Blocks According to Structure, Function Type and Connection Type

What is the total CAGR expected to be recorded for the terminal block market during 2022-2027?

What are the driving factors for the terminal block?

Which are the significant players operating in the terminal block market?

Which region will lead the terminal block market in the future?

Asia Pacific is expected to lead the terminal block market during the forecast period. .

Note: The above-mentioned table of content is tentative, and we may change the content as we proceed in research.

The study involved four major activities in estimating the current size of the terminal block market. Exhaustive secondary research has been done to collect information on the market, peer market, and parent market. To validate these findings, assumptions, and sizing with industry experts across the value chain through primary research has been the next step. Both top-down and bottom-up approaches have been employed to estimate the complete market size. After that, market breakdown and data triangulation methods have been used to estimate the market size of segments and subsegments.

In the primary research process, various primary sources from both the supply and demand sides have been interviewed to obtain qualitative and quantitative information for this report. Primary sources from the supply side include industry experts, such as CEOs, VPs, marketing directors, technology and innovation directors, and related key executives from major companies and organizations operating in the terminal block market. Following is the breakdown of primary respondents: 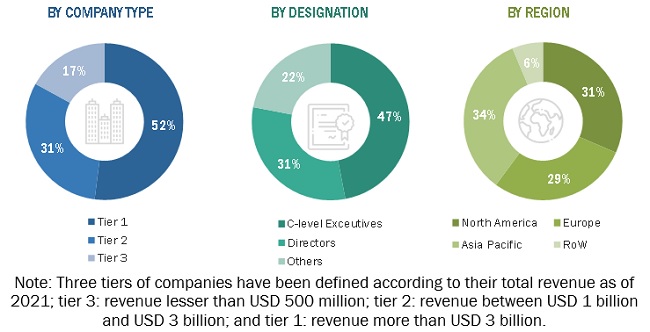 Both the top-down and bottom-up approaches have been used to estimate and validate the size of the overall terminal block market based on segments. The research methodology used to estimate the market size has been given below:

After arriving at the overall terminal block market size—using the estimation processes explained above—the market has been split into several segments. To complete the overall market engineering process and arrive at the exact statistics of each market segment and subsegment, the data triangulation and market breakdown procedures have been employed, wherever applicable. The data has been triangulated by studying various factors and trends in both the demand and supply sides of the terminal block market.

Based on the given market data, MarketsandMarkets offers customizations in the reports according to the client’s specific requirements. The available customization options are as follows:

Would like to know market share and trends for the next 5 years in field of electrical connecters and terminal blocks. Purpose of this is to align my sourcing strategy globally for future.

My company has access to all relevant reports for our business published by a 8–9 year old research firm. The updated reports about the terminal block market are supposed to be published yet. I wonder what the main differences will be and what further insights your report will deliver? How often is this report been updated?

We are manufacturers of terminals blocks in Argentina and we would like to know technological trends of the family of products, units sold in different markets, ranking of manufacturers by region, prices by region, etc.

I am interested in the phoenix terminal market in India for DCS.

I'm interested to have a detailed report on global control panels terminal blocks market. How big is the market for industrial Control Panels?

We are looking for Terminal Block Market data specifically for 2019 with forecasts up to 2025. Further, we would like to have a overview on global Industries adopting terminal block, key Strategies adopted by the vendors in the market, segmentation on the basis of type (barrier strips, sectional terminal blocks, PCB mount terminal blocks, Power terminal block, Historical Analysis, and growth opportunities.