Market size estimations for various segments and subsegments of this market were obtained through extensive secondary research and government sources, such as the U.S. Department of Defense, the U.S. Air Force, company website, corporate filings such as annual reports, investor presentations, and financial statements, and trade, business, and professional associations, among others. Furthermore, corroboration with primaries and market triangulation with the help of statistical techniques using econometric tools were carried out. All percentage shares, splits, and breakdowns were determined using secondary sources and verified through primary sources. All possible parameters that affect the market covered in this research study have been accounted for, viewed in extensive detail, verified through primary research, and analyzed to acquire the final quantitative and qualitative data. This data is consolidated and added with detailed inputs and analysis from MarketsandMarkets, and presented in this report. 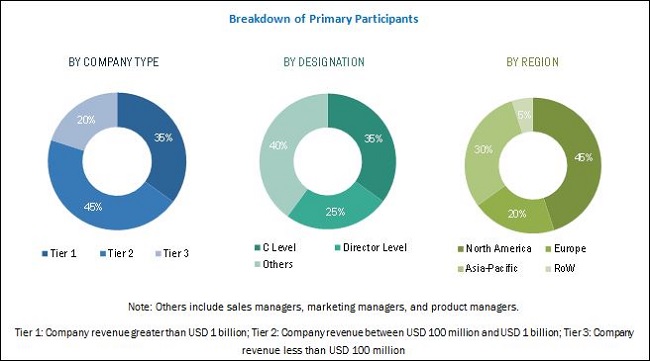 “Study answers several questions for stakeholders, primarily, which segments to focus on over the next five years for prioritizing efforts and investments.”

This research report categorizes the military CNS technologies market into the following segments and subsegments:

Customizations available for the report

With the given market data, MarketsandMarkets offers customizations as per specific needs of a company. The following customization options are available for the report:

Communication, navigation, and surveillance (CNS) technologies are widely utilized in military CNS equipment for battlefield operations. There have been huge R&D investments made in this field by prominent players operating in the defense sector, owing to the replacement of legacy systems in developed countries, technological innovations in defense communication equipment, and modernization of battlefield operations.

A Software Defined Radio (SDR) is a radio communication system that attempts to place most of the complex signal handling involved in receivers and transmitters into the digital (DSP) style. These radios are increasingly used by defense forces to communicate through various frequencies, as well as to implement different protocols. In addition, the propagation of military CNS technologies from conventional tools to advanced products will help enhance the combat capabilities of defense forces. One of most immediate benefits that software defined radio can provide is spectrum flexibility. As the defense spectrum is off-limits for civilian use, the efficient use of spectrum is expected to be the key focus area in the near future, which will eventually push the growth for military CNS technologies market.

The demand for advanced communication systems to replace legacy equipment, the need for compatibility of devices with future standards, and the need to reduce the cost of end products and services are some of the major factors driving the growth of the SDR segment. However, high development costs and integration issues are factors restraining the demand for SDR.

An Inertial Navigation System (INS) is a type of navigation system that tracks the position and orientation of an object relative to a known starting point, orientation, or velocity. The increasing demand for new aircraft delivery will directly impact the growth of the inertial navigation system segment, as INS is one of the primary systems installed in every aircraft, eventually the integral part of military CNS technologies market.

Military radar, a type of surveillance system, is utilized for air & ballistic missile defense, air-to-air combat, and strategic long-range surveillance, among other military applications. It plays a very important role in the military CNS technologies market The increase in demand for military radar systems and technologies is spurred by the need felt by several nations to upgrade their radar technologies, so as to safeguard their borders from terrorist threats. Military radar also offers countries with insurgent situations the access to perform surveillance and weapons control as well as other monitoring functions. Increased demand for defense surveillance over porous and attack prone borders, increased spending on defense equipment by emerging countries, and increased terrorism and ongoing inter-country conflicts are factors contributing to the rising demand for military radar. Unlike earlier times, defense surveillance has become an integral task for defense forces worldwide, considering the aforementioned causes. 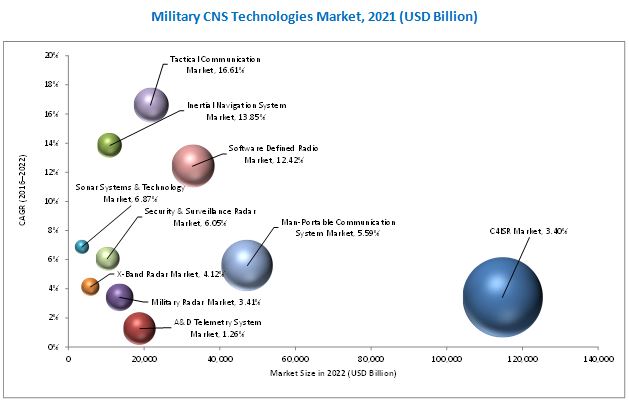 11 C4isr Technologies Market (Page No. - 114)
11.1 Introduction
11.2 By Platform
11.2.1 Airborne
11.2.2 Naval
11.2.3 Land
11.3 By Application
11.3.1 Command & Control
11.3.2 Communications
11.3.3 Computers
11.3.4 Intelligence
11.3.5 Surveillance & Reconnaissance
11.3.6 Electronic Warfare
11.4 By Region
11.4.1 North America: Investment in Modernizing Its Weapons is Driving the Market in This Region
11.4.2 Europe: Deployment of Forces Will Influence the Demand for C4isr
11.4.3 Asia-Pacific: Countries Upgrading Their Surveillance and Resource Allocation
11.4.4 Middle East: Rising Tensions Among the Countries has Led to Procurement of Defense System for Homeland Security
11.4.5 Rest of the World: Increasing Expenditure for Procuring Defense Equipment