Turret systems are equipped with multi-mission systems that can be reconfigured to enhance the effectiveness of combat vehicles. These systems have a modular mission payload with an open architecture that can be integrated with other systems to support several operations. The combat vehicles can also be interfaced with third-party payloads such as Remote Weapon System (RWS), interrogation arms, and Reconnaissance, Surveillance, Targeting and Acquisition (RSTA) systems to support combat; chemical, biological, radiological, and nuclear (CBRN) defense; RSTA; and route clearance mission. Turret systems are also equipped with interchangeable weapon systems based on mission requirements. For instance, infantry fighting vehicles can be upgraded with high-caliber weapons and other situational awareness systems to enhance their firepower. The flexibility to install multiple payload systems increases the efficiency of armored vehicles, lowers their lifecycle costs, and reduces soldier workload. Modularity in turret systems has led to the development of new scalable systems that can be easily integrated with other systems.

The demand for autonomous robots is increasing worldwide as they are used for various purposes, including carrying out target acquisition and surveillance operations by defense forces of different countries. Major companies such as Moog Inc. (US), Northrup Grumman Corporation (US), Lockheed Martin Corp. (US), Elbit System (Israel), and Rafael Advanced Defense System Ltd. (Israel) are developing military robots with intelligence, surveillance, reconnaissance (ISR) and target acquisition capabilities.

The demand for unmanned systems has increased globally in recent years due to their growing use by military forces for carrying out intelligence, surveillance, and reconnaissance (ISR) and combat operations. Furthermore, the declining defense budgets of advanced economies such as the UK, Italy, Spain, Germany, and France have led to the increased procurement of unmanned systems to replace their defense personnel, which use large volumes of equipment and logistic support.

Autonomous vehicles and systems are prone to hardware and software malfunctions. Even though they are built and designed to withstand harsh situations, they continue to face challenges, such as extreme temperatures, component breakdowns, and software jams, among others. Unmanned armored ground vehicles are controlled by human operators either through tethered modes or operated remotely. In some instances, human operators might lose control of these robots, or robots miscalculate the commands, resulting in ultimate mission failures. Engineers have faced challenges in creating fully autonomous vehicles and systems as this technology is under development.

Based on platform, the turret system market has been segmented into land, airborne, and naval. The land segment is likely to grow at the highest CAGR during the forecast period. It is projected to grow from USD 12.0 billion in 2022 to USD 13.9 billion by 2027, registering a CAGR of 2.8%.

Based on type, the turret system market has been segmented into manned and unmanned. The unmanned segment is projected to grow at a higher CAGR than the manned segment, owing to the technological advancements in unmanned turrets, a widely accepted turret weapon system in most countries. 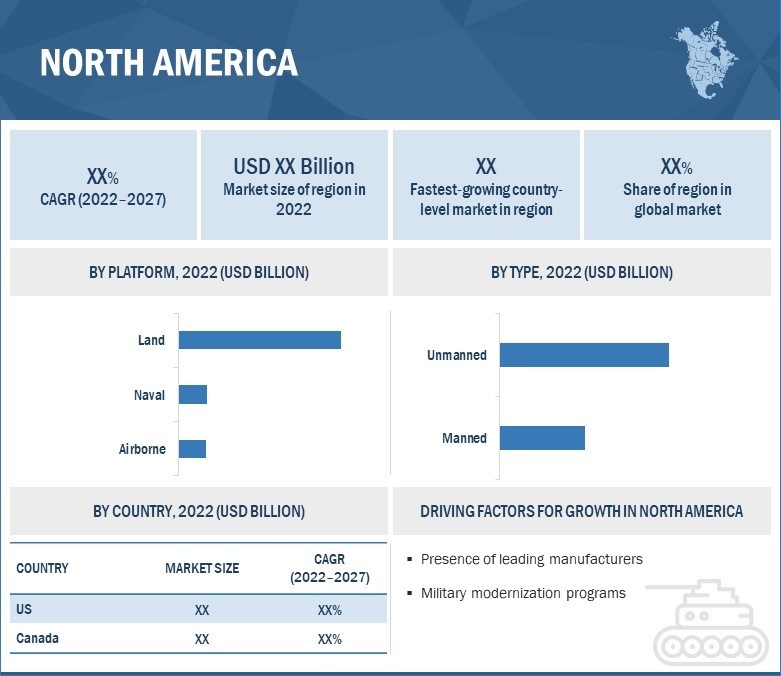 Major companies profiled in the report are Moog Inc. (US), Rafael Advanced Defense System Ltd. (Israel), Northrop Grumman Corporation (US), Lockheed Martin Corporation (US), and Elbit System (Israel), among others. The report covers various industry trends and new technological innovations in the turret system market for 2018–2027.

The study categorizes the turret system market based on platform, type, component, and region.

What are your views on the growth prospect of the turret system market?

What are the key sustainability strategies adopted by leading players operating in the turret system market?

Response: Key players have adopted various organic and inorganic strategies to strengthen their position in the turret system market. Major players, including Moog Inc. (US), Lockheed Martin Corporation (US), Northrop Grumman Corporation (US), Elbit System (Israel), and Rheinmetall AG (US), have adopted strategies, such as contracts and agreements, to expand their presence in the market further.

What new emerging technologies and use cases disrupt the turret system market?

Response: Some of the major emerging technologies and use cases disrupting the market include the development of land compact vehicles, unmanned systems across the platform, and others.

Who are the key players and innovators in the ecosystem of the turret system market?

Which region is expected to hold the highest market share in the turret system market?

Response: North America accounted for the largest share of 47.9% of the market in 2021, while Europe is expected to grow at the highest CAGR of 4.4% during the forecast period.

The study involved four major activities in estimating the current size of the turret system market. Exhaustive secondary research was done to collect information on the market, peer market, and parent market. The next step was to validate these findings, assumptions, and sizing with industry experts across the value chain through primary research. Both top-down and bottom-up approaches were employed to estimate the total market size. After that, market breakdown and data triangulation were used to estimate the market size of segments and subsegments.

The market share of companies offering turret systems was arrived at based on the secondary data available through paid and unpaid sources and by analyzing the product portfolios of major companies and rating them on their performance and quality. In the secondary research process, sources such as government databases; SIPRI; corporate filings, such as annual reports, press releases, and investor presentations of companies; white papers, journals, and certified publications; articles by recognized authors; and directories and databases were used to identify and collect information for this study.

Secondary research was used to obtain key information about the industry's value and supply chain. It was also used to identify the key players by various products, market classifications, and segmentation according to their offerings. Secondary information helped in understanding different industry trends related to turret system platforms, type, component, and region, as well as key developments from the market and technology-oriented perspectives.

In the primary research process, various sources from the supply and demand sides were interviewed to obtain qualitative and quantitative information on the market. Primary sources from the supply side included industry experts such as vice presidents (VPs); directors from business development, marketing, and product development/innovation teams; related key executives from systems manufacturers; army personnel; turret system manufacturers; integrators; and key opinion leaders.

The top-down and bottom-up approaches were used to estimate and validate the size of the turret system market. The research methodology used to estimate the market size includes the following details.

Key players in the turret system market were identified through secondary research, and their market share was determined through primary and secondary research. This included a study of the annual and financial reports of the top market players and extensive interviews with leaders such as directors, engineers, marketing executives, and other stakeholders of leading companies operating in the turret system market.

All percentage shares, splits, and breakdowns were determined using secondary sources and verified through primary sources. All possible parameters that affect the market covered in this research study were accounted for, viewed in extensive detail, verified through primary research, and analyzed to obtain the final quantitative and qualitative data on the turret system market. This data was consolidated, enhanced with detailed inputs, analyzed by MarketsandMarkets, and presented in this report.

After arriving at the overall market size, the total market was split into different segments and subsegments. The data triangulation and market breakdown procedures explained below were implemented, wherever applicable, to complete the overall market engineering process and arrive at the estimated market numbers for turret system segments and subsegments. The data was triangulated by studying various factors and trends from both the demand and supply sides. The market size was also validated using the top-down and bottom-up approaches.

MarketsandMarkets offers the following customizations for this market report: