The global agrochemicals market in the year 2013 stood at USD 41.12 Billion, marking a massive 43% growth compared to USD 28.78 Billion in 2007. Increased participation of private players and their rigorous effort to improve products and expand worldwide have supported growth in the agrochemicals market, enormously. The private sector has emerged as a key player in driving new developments in agriculture, globally. Greater focus on R&D, improved support of intellectual property rights (IPR), the extension of agricultural input companies’ footprint worldwide, and supporting government regulations have resulted in improved participation of private companies in agricultural research investments.

This report includes estimations of deal sizes for value (USD million) and deal number. Top-down and bottom-up approaches have been used to analyze and validate the deal size of the agrochemicals market and identify the attractive segments for investments in the overall market. Key players in the market have been identified through secondary research, and their deal share in respective regions has been determined through primary and secondary research. All percentage shares, splits, and breakdowns have been determined using secondary sources and were verified through primary sources. The figure below shows the breakdown of profiles of industry experts who participated in the primary discussions. 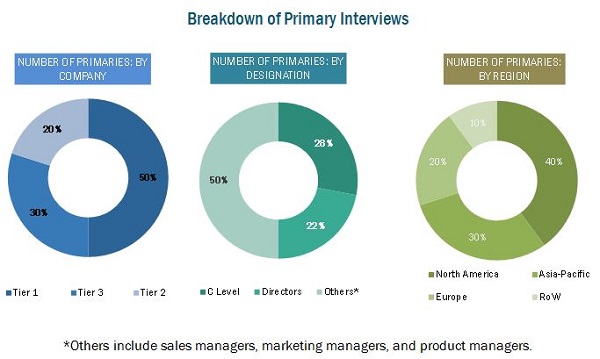 This report is targeted at

This report provides both qualitative and quantitative analyses of the mergers & acquisitions in the agrochemicals market, and the preferred development strategies of key players. The key players preferred acquisitions, agreements, divestitures, and joint ventures as strategies to gain a larger share in the market. The report also analyzes the market dynamics and market share of leading players.

On the basis of Segment, the mergers & acquisitions in the agrochemicals market is segmented as follows

On the Basis of Deal Type, the Mergers & Acquisitions in the Agrochemicals Market is segmented as follows:

On the basis of Region, the mergers & acquisitions in the agrochemicals market is segmented as follows:

With the given market data, MarketsandMarkets offers customizations according to the client-specific needs.

The global agrochemicals market in the year 2013 stood at USD 41.12 Billion, marking a massive 43% growth compared to USD 28.78 Billion. Increased participation of private players and their rigorous effort in improving products and expanding worldwide has supported enormous growth in the market. Mergers & acquisitions have resulted in the consolidation of the agrochemicals market, and this trend is expected to continue in the coming years. A comparatively intense completion among large-scale players has led to mergers & acquisitions in the market with only six players including Syngenta AG (Switzerland), Bayer CropSciences (Germany), BASF (Germany), The Dow Chemical Company (U.S.), Monsanto (U.S.), and DuPont (U.S.) controlling more than 80% of the global agrochemical product sales.

Based on the deal type during the period March 2000 to March 2016, the maximum number of the deals was acquisitions followed by agreements in the agrochemicals market. Among the varied agrochemical market segments, such as herbicides, fungicides, insecticides, and plant growth regulators, herbicides accounted for the largest market share, followed by fungicides and insecticides. Apart from the major market segments, there have been various combinations of opportunities that the agrochemical companies are looking for in entire crop-protection product portfolios or different combination of agrochemical products, for example, deals in fungicides and insecticides, patents and distribution of agrochemicals, and others. Agricultural or crop protection technology, retail operations, and distribution facilities will also drive mergers & acquisitions in the market. 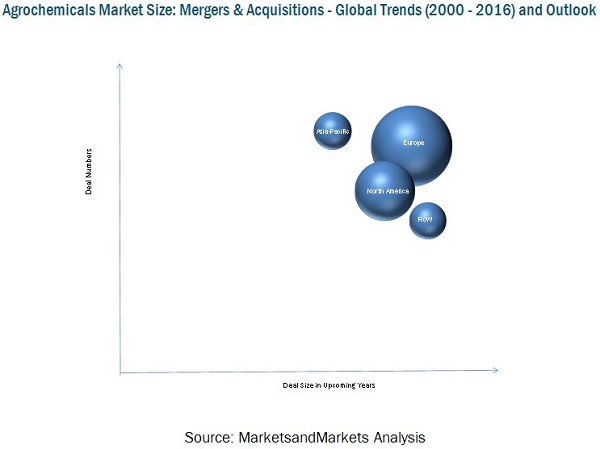 10 Portfolio GAP Analysis of the Major Companies in the Agrochemicals Market (Page No. - 104)