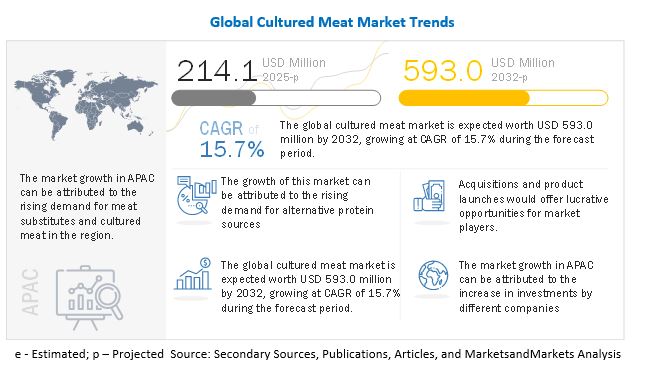 According to data published by the Food and Agriculture Organization (FAO), global meat production is projected to be 16% higher by 2025, than during the base period of 2013–2015. Rising consumption of meat coupled with the increasing demand for nutritional meat is expected to support the market growth of cultured meat during the forecast period. The increasing global population in developing economies coupled with the rising meat consumption is projected to drive the market growth of cultured meat across the globe. Rapid urbanization in developing countries has fueled the consumption of proteins from animal sources. Compared to rural areas, the urban population consumes more meat, beef, and poultry products. Poultry is one of the major categories in the cultured meat market, which is expected to witness significant growth during the forecast period due to the increase in demand for affordable animal protein over red meats. Developing regions such as Asia Pacific and Africa are expected to account for significant growth in the next 10 years due to the shift from a cereal-based diet to a protein-based one. This growing trend of protein consumption is expected to present several opportunities for various meat processors and food companies to invest in alternative meat protein such as cultured meat to fulfill consumer demand. Recent advancements in food technology have helped in the development of new alternate protein products such as plant-based protein, cultured meats, and edible insects. These products provide a considerable amount of protein but require less natural resources compared to common protein sources such as meat and fish. This practice is gaining popularity in the market and has high growth potential. A number of players have emerged in the animal protein sector. For instance, in insect protein, nextProtein (France), founded in 2015, provides insect-based protein for feed, under its brand, Protix, which is an ideal protein source for pet food applications. In cultured meat, a handful of startups are in the R&D phase and are about to make their cultured meat products commercially available by 2021. Meatless food products such as meat-free burgers by Impossible Food (US) and pea-based shrimp by New Wave Foods (US) have already garnered a competitive edge.

Cultured meat, because of the inherent novelty of its nature, is expected to face highly stringent regulatory scrutiny. Formulating meat in laboratories, though likely to yield positive outcomes in the interest of consumers and environmental stability, is expected to be minutely evaluated as meat continues to be a vital source of nutrient in recommended daily diets. This upcoming technology is being closely monitored by the United States Department of Agriculture (USDA) and the Food and Drug Administration (FDA). Companies in the US and Europe, engaged in the development of cultured meat, have to face lengthy regulatory approval procedures, which will affect the time taken for the commercialization of these products. Scaffolds are also edible for humans, FDA has approved pectin, gellan gum, chitosan, gelatin, cellulose, gluten, and alginate to be used.

Challenges: Intolerance of probiotics to stomach acid and bile

International regulatory bodies are making food safety and quality regulations more stringent. Apart from food testing and certification, these international regulatory bodies compel manufacturers to follow food labeling rules and regulations. Governments of most nations are taking initiatives to implement food labeling laws. It is challenging to mention each ingredient used in processed meat products or during meat processing on the product package. According to manufacturers, this may hamper sales as customers may not prefer to buy products with undesirable ingredients in it.

The US is projected to dominate the North American region by 2032, in terms of value. This is attributed to the innovations in cultured meat, which are expected to reduce the environmental impact of meat production and promote human health and food safety by eliminating harmful content such as saturated fats and pathogens. These factors are expected to drive the growth of the cultured meat market during the forecast period in this region. Moreover, high consumer acceptance for cultured meat in the country is supporting the demand for cultured meat.

Consumers shifting toward a flexitarian and vegan lifestyle is a significant factor driving the demand for meat substitutes.

The global binders and scaffolders for meat & meat substitutes market has been influenced by some of the macroeconomic and microeconomic factors occurring in some of the key countries around the globe. This would prove potential enough to significantly drive the market in value sales during the forecast period. Meat substitutes are being preferred by plant-based meat manufacturers and consumers. Consumers shifting toward a flexitarian and vegan lifestyle is a significant factor driving the demand for meat substitutes. They also help in reducing the carbon emission in the environment and protect animals. Several companies are interested in this trend of meat alternatives and focusing on developing new plant-based meat products.

Key players in this market include ADM (US), DuPont (US), Kerry (Ireland), Danagreen Co., Ltd (South Korea), Marix Meats (US), and Memphis Meat (US).

This research report categorizes the binders and scaffolders for meat & meat substitutes market, based on application, type, meat type, and region

Which region is projected to account for the largest share in the binders and scaffolders for meat & meat substitutes?

North America account largest share in the consumption of meat, this demand is expected to be large than other regions.

What is the current size of the global meat binders market?

The global meat binders market is estimated to be valued at USD 3.7 billion in 2021. It is projected to reach USD 4.2 billion by 2026, recording a CAGR of 2.6% during the forecast period

Which are the key players in the market, and how intense is the competition?

This research study involved the extensive use of secondary sources, directories, and databases such as Bloomberg Businessweek and Factiva to identify and collect information useful for a technical, market-oriented, and commercial study of the Binders and scaffolders market for meat & meat substitutes. In-depth interviews were conducted with various primary respondents—such as key industry participants, subject matter experts (SMEs), C-level executives of key market players, and industry consultants—to obtain and verify the critical qualitative and quantitative information as well as to assess prospects. The following figure depicts the research design applied in drafting this report on the Binders and scaffolders market for meat & meat substitutes.

Secondary research has mainly been used to obtain key information about the industry’s supply chain, the market’s monetary chain, the total pool of key players, and market classification and segmentation according to industry trends to the bottom-most level and geographical markets. It has also been used to obtain information on the key developments from a market-oriented perspective.

The market comprises several stakeholders in the supply chain, which include ingredient manufacturers, suppliers, meat processors, researchers, equipment manufacturers, scientists, and cellular agriculture technology providers. Various primary sources from both the supply and demand sides of the market have been interviewed to obtain qualitative and quantitative information. The primary interviewees from the demand side include research institutions involved in R&D, government agencies, NGOs, entrepreneurs, food companies, and investors. The primary sources from the supply side include binding ingredients manufacturers and suppliers of bioreactor and laboratory equipment used in the production of cultured meat.

After arriving at the overall market size from the estimation process explained above, the total market was split into several segments and subsegments. To arrive at the exact statistics for all the segments and subsegments, the data triangulation and market breakdown procedures have been employed, wherever applicable. The data has been triangulated by studying various factors and trends from both the demand and supply sides. Along with this, the market has been validated using both the top-down and bottom-up approaches..

With the given market data, MarketsandMarkets offers customizations according to company-specific scientific needs.

With the given market data, MarketsandMarkets offers customizations according to the company-specific scientific needs.

Share information on overview of strategies used by major players. Also, does this report provide an analysis of the Singapur market?

What are the key market dynamics influencing market growth? How will they turn into strengths or weaknesses of companies operating in the market space?

Looks interesting! Can I get more details about the growth rate of the market for the next 6 years.

Interested in meat binders market growth estimates and growth opportunities in North American region along with key countries around the globe.