The breathable films market is estimated to be USD 2.6 billion in 2020 and is projected to reach USD 3.9 billion by 2025, at a CAGR of 8.2% between 2020 to 2025. Rising awareness of health and hygiene and increasing the purchasing power of consumers are the major drivers of the global breathable films market during the forecast period.

Due to the pandemic, demand for personal protective equipment (PPE) kits has grown exponentially from the healthcare workers on the frontline fighting against the virus. Initially, the demand for PPE kit was catered by China, but due to the US-China trade tensions and PPE kits failing quality teste sent by China to India are some factors that led other countries to start local production. This has increased the demand for breathable films as the breathability of PPE kits is one of the critical parameters during quality testing. The breathable films market in 2020 is anticipated to reach USD 2.6 billion, with a growth rate of 7.3%.

Polyethylene segment is the largest type of breathable films market

Medical segment is the fastest-growing application of breathable films market

The adoption of hygiene products in developing countries is low as compared to developed countries such as the US, Canada, Japan, and Western European countries such as Germany, France, the UK, and Italy. In APAC, Africa, and Eastern Europe, the adoption is low due to cultural differences (affecting the consumers’ attitude towards these products), unaffordability due to high price and low per capita income. However, with increasing awareness related to health & hygiene and improving per capita income, the adoption of hygiene products is increasing.

Restraints: stagnant growth in the baby diapers market in the developed countries

The penetration level of hygiene products in developing countries is still very low. Countries with large populations and high birth rates such as China, India, and Indonesia currently have a very low penetration rate. However, the demand is expected to grow significantly with the increase in per capita income, growing awareness regarding health and hygiene, and changing consumer preference. There is a big prospect for the growth of hygiene products as well as breathable films in emerging countries such as China, India, and Indonesia.

Although the breathable films market is poised for growth in the next five years, there are certain issues that pose a challenge to market growth. Overcoming these challenges may entail double-digit growth for the breathable films market. The feminine hygiene market in the US and Europe is mature, with a high penetration rate. On the other hand, emerging markets provide an opportunity for growth in this area. Attractive as they may seem, the issue is to overcome the misconceptions surrounding menstruation, which is considered as a disease/taboo in developing countries. The challenge is to educate and uplift women’s social status so that they can have access to hygiene products without difficulty. 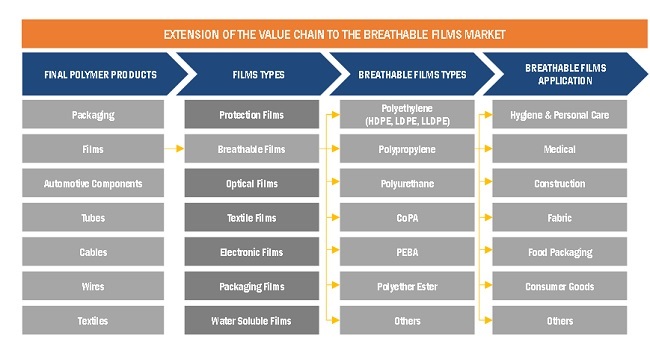 APAC is estimated to be the largest market for breathable films and is also projected to register the fastest CAGR during the forecast period. China is expected to account for the largest share of the market in APAC till 2025. The increasing disposable income & consumption levels and the growing affluence of Chinese consumers will help the hygiene industry to grow stronger in the country. The penetration rate of the disposable baby diaper market in China is lower than in North America and Europe due to reasons such as low awareness, high cost, and social stigma. 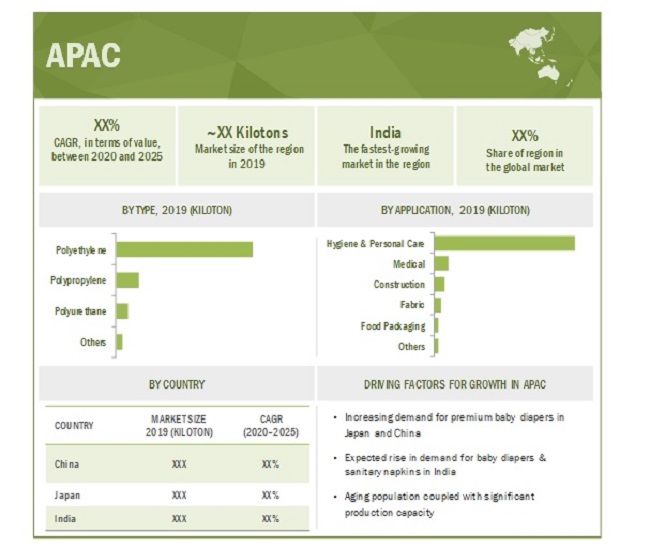 This research report categorizes the breathable films market on the basis of type, application, and region.

On the basis of type:

On the basis of technology:

Key Questions addressed by the report

What are the major drivers influencing the growth of the breathable films market?

What are the different types of breathable films?

The different types of breathable films are polyethylene, polypropylene, polyurethane, and others.

How are the breathable films segmented in terms of technology?

What is the difference between microporous and monolithic breathable films?

The breathability of microporous films depends on the formation of a tortuous path inside the films, which has billions of tiny holes per square centimetre. The size of these holes is smaller than the smallest raindrops and bigger than the largest water molecules. The breathability of monolithic films on the other hand, utilizes continuous hydrophilic laminates with membranes in between which absorb gases and water molecules on one surface, transferring the molecules through the film to release it on the other side.

What are the major end-use applications for breathable films?

What are the biggest restraints for breathable films?

The biggest restraints in the breathable films market are the developed countries seeing stagnant growth in the baby diapers markets.

What are the new opportunities in the breathable films market?

Who are the major manufacturers of breathable films?

What are the emerging applications for breathable films?

In the medical industry, breathable films are finding increasing usage due to its characteristics such as permeability, elastics, processability, and strength. The report also answers which technology will see the highest growth in the medical application.

How is the hygiene & personal care market aligned?

The study involved four major activities for estimating the current size of the global breathable films market. Exhaustive secondary research was carried out to collect information on the market, the peer product market, and the parent product group market. The next step was to validate these findings, assumptions and sizes with the industry experts across the value chain of breathable films through primary research. Both the top-down and bottom-up approaches were employed to estimate the overall size of the breathable films market. After that, market breakdown and data triangulation procedures were used to determine the size of different segments and sub-segments of the market.

The breathable films market comprises several stakeholders such as raw material suppliers, technology developers, breathable films companies, and regulatory organizations in the supply chain. The demand side of this market is characterized by the development of the hygiene applications. The supply side is characterized by advancements in technology and diverse application industries. Various primary sources from both the supply and demand sides of the market were interviewed to obtain qualitative and quantitative information.

Following is the breakdown of primary respondents—

*Others include sales managers, marketing managers, and product managers.

**Others include South America and the Middle East & Africa

The overall market size has been used in the top-down approach to estimate the sizes of other individual markets mentioned in the segmentation through percentage splits derived using secondary and primary sources.

For calculating each type of specific market segment, the size of the most appropriate immediate parent market has been considered for implementing the top-down approach. The bottom-up approach has also been implemented for data extracted from secondary research to validate the market sizes, in terms of value and volume, obtained for each segment.

After arriving at the total market size through the estimation process explained above, the overall market was split into several segments and sub-segments. The data triangulation and market breakdown procedures were employed, wherever applicable, to complete the overall market size estimation process and arrive at the exact statistics for all segments and sub-segments. The data was triangulated by studying various factors and trends from both the demand and supply sides. In addition, the market size was validated by using both the top-down and bottom-up approaches. Then, it was verified through primary interviews. Hence, for every data segment, there are three sources—top-down approach, bottom-up approach, and expert interviews. The data was assumed to be correct when the values arrived at from the three sources matched.

Along with the given market data, MarketsandMarkets offers customizations as per the specific needs of the companies. The following customization options are available for the report:

Breathable films Market
Published Date: Sep 2020 | Report Code: CH 4581
Inquiry Before Buying Request Sample
REQUEST FORM
By clicking the "Submit" button, you are agreeing to the Terms of Use and Privacy Policy.