[261 Pages Report] The global bromine market size is projected to grow from USD 3.2 billion in 2020 to USD 4.1 billion by 2025, at a CAGR of 5.0% from 2020 to 2025. The market growth is driven by the increasing demand for bromine in flame retardants, mercury emission control, water treatment, and oil & gas drilling. 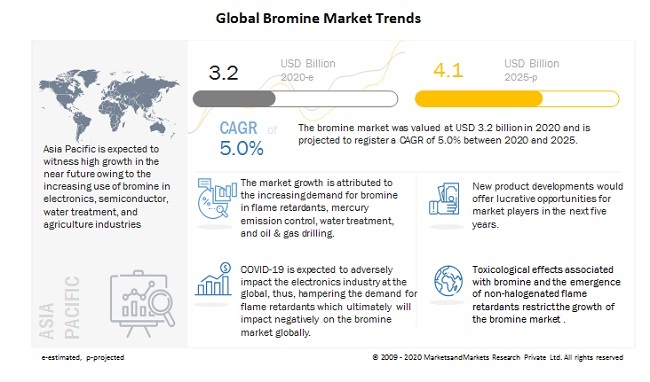 The bromine market includes major Tier I and II suppliers like Israel Chemicals Ltd. (ICL), Albemarle Corporation, Lanxess Corporation, and Tosoh Corporation, among others. These suppliers have their manufacturing facilities spread across various countries across Asia Pacific, Europe, North America, South America, and RoW. COVID-19 has impacted their businesses as well.

Globally, properties worth billions of dollars are lost due to fire-related accidents every year. Insurance companies have to utilize a major share of their revenue in settling claims on assets, infrastructure, and human lives lost in fire accidents. This makes anti-inflammatory agents or flame retardants crucial chemicals since they minimize the fire-related risks for almost every manufactured commodity. Flame retardants prevent fire by delaying the combustion process by forming a layer of free radicals. They either release carbon dioxide or free radicals that combine with oxygen molecules, thus arresting the oxidation process.

EU countries are focused on the implementation of stringent fire safety regulations in the automotive, electronics, consumer goods, and textile industries. Apart from the EU, countries across the globe also follow different fire safety standards and regulations. Therefore, the manufacturers of automobiles, electronics, consumer goods, and textiles need to meet the fire safety regulations of the respective countries. These safety standards and regulations have, therefore, increased the demand for flame retardants globally. According to the Danish Building Regulation 2010 (BR10), buildings must also have adequate protection against fire and fire spread.

Brominated flame retardants are widely used in everyday commodities, such as plastics, textiles, and rubber, to reduce their flammability. Therefore, growth in the consumption of these commodities, especially in the emerging markets of Asia Pacific and the Middle East, is expected to bolster the demand for brominated flame retardants, ultimately boosting the market for bromine.

Brominated compounds, such as flame retardants, have routinely been added to consumer products, such as electronics, plastics, and many more for several decades in a successful effort to reduce fire-related injuries and property damage. Recently, concerns regarding this class of chemicals have risen because of the harmful and toxicological effect it has on health and the environment. The widespread production and use of brominated flame retardants (BFRs) lead to increased contamination of the environment. These compounds also have an adverse effect on animals and wildlife. However, the current toxicology databases that exist are inadequate to understand the risk. Many of the studies that do exist involve commercial mixtures, but do not represent human exposure. The future course of such studies has to be focused toward the congeners, and potentially their metabolites or breakdown products, to understand the risk from commercially-used bromine derivatives.

Opportunity: Increasing use of hydrogen bromide in flow batteries

Hydrogen bromide flow batteries are included under the category of membrane-less flow batteries with a high-power density. EnStorage Inc. (Israel), a developer of large-scale electricity storage solutions, produced grid-connected 50.0 KW hydrogen-bromine (HBr) flow batteries, which were connected at the company’s test site in southern Israel to provide up to 100.0 kWh of energy. The grid became operational in March 2013. EnStorage Inc. flow batteries utilize HBr and H2 as storage chemicals. Hydrogen-bromine flow batteries are a reliable source of sustainable power for large scale industrial units. They are currently being used as reliable energy storage solutions in various industrial units around the globe.

In the oil & gas industry, clear brine fluids (CBF) are used extensively in well-drilling activities completion and workover operations. The business of CBF significantly depends on the prices of oil and gas. The Gulf of Mexico rig count is a useful indicator of the future demand for CBF products. The Gulf of Mexico rig count dropped during 2015 as a result of low oil and natural gas prices and remained low in early 2016. Therefore, the demand for CBF products in onshore and international markets was affected by the low prices. There was a significant drop in the prices of natural gas and oil since the beginning of 2014. As a result, drilling activities and capital expenditure levels declined in the domestic and international markets. The decline in activity in the natural gas and oil exploration and production industries resulted in a decline in the demand for CBF products and the services associated with them. An expected rebound in oil & gas prices in the near future will bring growth opportunities for CBF, thus driving the bromine market.

Based on application, flame retardants segment accounted for the largest market share in 2019

Based on the application, the flame retardants segment accounted for the largest share of the bromine market in 2019. Brominated flame retardants (BFRs) are bromine-containing compounds that are added to substances to inhibit or reduce their rate of combustion. Stringent fire safety regulations implemented by the regulatory bodies augment the consumption of flame retardants in various end-use industries, such as electronics & consumer goods, building & construction, automotive, textile, rubber, and elastomer. Although brominated flame retardants are less preferred nowadays due to the growing environmental concerns associated with them, their widespread application in the industries mentioned above is sustaining their market and increasing their demand by the day.

Based on the derivative, the organobromine segment accounted for the largest market share in 2019

Based on derivative, the organobromine segment accounted for the largest share in 2018, as it is widely used in the manufacturing of brominated flame retardants, pesticides, fumigants, and biocides for water treatment. The top players in the bromine market, such as Albemarle (US) and Israel Chemicals Ltd. (Israel), are taking initiatives to develop and market polymeric alternatives to hexabromocyclododecane (HBCD) flame retardants, which are being phased out due to toxicological concerns. The manufacturers of PVC in cable mantling, for instance, are now shifting toward the use of polymers that do not use brominated flame retardants.

By region, Asia Pacific is estimated to be the largest market for bromine in 2020. The demand for bromine in this region is mainly propelled by its increasing use in China, Japan, and India. Increasing infrastructural development and the rise in the disposable income of the middle-class population in Asia Pacific have boosted the demand for flame retardants, which are used extensively in insulation and fabrication of plastic and electronic components. China is expected to be the dominant and fastest-growing market for bromine in the Asia Pacific region, mainly due to the escalating demand for brominated flame retardants in the country. China, which had banned the export of bromine and its related compounds, is focusing only on imports to meet its domestic requirements. 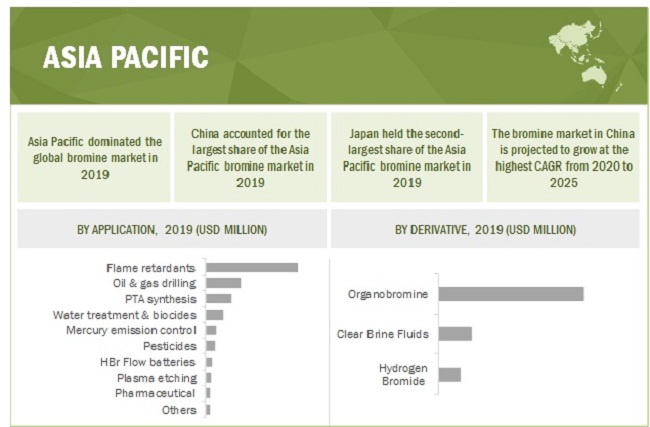 This research report categorizes the bromine market based on application, derivative, and region and forecasts revenues as well as analyzes trends in each of these submarkets.

Based on the application:

Based on the derivative:

Based on the region:

Bromine is a highly toxic, volatile chemical that exists in a reddish-brown liquid state at room temperature.

The bromine market is expected to be fueled primarily by the manufacturing of flame retardants, oil & gas drilling, and purified terephthalic acid synthesis. Apart from these, bromine is also used for water treatment in HBr flow batteries, pharmaceuticals, pesticides, mercury emission control, and plasma etching.

The bromine market is expected to grow the fastest in China, followed by the US, India, and Israel.

The increasing use of bromine in mercury emission mitigation in coal-fired power plants; the rising demand for flame retardants due to stringent fire safety framework is expected to augment the market growth further.

Toxicological effects associated with bromine, the emergence of non-halogenated flame retardants, and fluctuations in oil & gas prices pose significant challenges for the growth of the bromine market.

This study involved four major activities in estimating the current size of the bromine market. Exhaustive secondary research was undertaken to collect information on the bromine market, its peer markets, and its parent market. The next step was to validate these findings, assumptions, and sizing with the industry experts across the bromine value chain through primary research. Both the top-down and bottom-up approaches were employed to estimate the overall size of the market. After that, the market breakdown and data triangulation procedures were used to estimate the sizes of different segments and subsegments of the bromine market.

As a part of the secondary research process, various secondary sources such as Hoovers, Bloomberg, BusinessWeek, Reuters, and Factiva were referred for identifying and collecting information for this study on the bromine market. Secondary sources included annual reports, press releases & investor presentations of companies, white papers, certified publications, articles by recognized authors, authenticated directories, and databases.

Secondary research was mainly conducted to obtain key information about the supply chain of the industry, the monetary chain of the market, the total pool of players, and market classification and segmentation according to industry trends to the bottom-most level, regional markets, and key developments undertaken from both, market- and technology oriented perspectives.

As a part of the primary research process, various primary sources from both the supply and demand sides were interviewed to obtain qualitative and quantitative information for this report on the bromine market. Primary sources from the supply side included industry experts such as chief executive officers (CEOs), vice presidents, marketing directors, technology and innovation directors, and related key executives from various key companies and organizations operating in the bromine market. Primary sources from the demand side included directors, marketing heads, and purchase managers from various end-use industries. Following is the breakdown of the primary respondents.

After arriving at the overall size from the market size estimation process explained above, the total market was split into several segments and subsegments. Data triangulation and market breakdown procedures were used, wherever applicable, to complete the overall market engineering process and arrive at the exact statistics for all segments and subsegments of the market. The data was triangulated by studying various factors and trends from both the demand and supply sides. In addition to this, the market size was validated using both top-down and bottom-up approaches.

Objectives of the Report

General information on innovative products, technology and market trends at all in the bromine and bromine derivative

Specifically, we are trying to ascertain the impact that our technology could have on the bromine industry.