Urbanization, increasing infrastructure, and government initiatives are the factors resulting in increase in modern lighting products. Incandescent lighting turns out to be a very costly and poor medium of lighting source. This stirs the push to LED lighting. COB LED technology has emerged due to its features such as low power consumption, cost-effective lighting, and high intensity output. COB LED market contributes around 7 to 8% to the overall market for LED and is expected to reach around 20% in the near future.

The market for COB LED is still at the growing stage and has high potential to grow in future. The governmentís support towards banning incandescent lighting and urbanization will lead to increase in the demand for COB LED lights. At present, pricing is the main hurdle for COB LED technology but that will also be resolved; as companies will achieve technology expertise and economies of scale; thereby making it more competitive with respect to conventional lighting. COB LED will be mainly preferred for illumination due to its high density and better color mixing.

In global market, APAC is the market leader in COB LED technology; both in terms of manufacturing companies and usage. China, Japan, and Taiwan are the main contributors to the overall market in it. It is followed by the U.S.; where urbanization and governmentís support are driving the lighting market. Europe is close to U.S. It is where lighting is taking a toll due to increase in the usage of ultra modern lighting for hospitality industry and architectural lighting. Rest of the world caters to Middle East and Africa; where Dubai is the largest contributor to infrastructure and lighting.

This report deals with all the driving factors, restraints, and opportunities with respect to the COB LED market that is helpful in identifying trends and key success factors for the industry. The report does distinguish between traditional lighting source and COB LED technology on the basis of various aspects. It also profiles the various companies in the field of COB lighting, with their competitive landscape and strategies. The report throws light on the winning strategies and burning issues pertaining to the COB LED industry.

On the basis of application market

On the basis of geography

North America, Europe, Asia-Pacific, and ROW are covered in the report.

Chip on Board (COB) LED market is driven by various factors such as high lumen and uniform output, and cost-effective and energy-efficient lighting. Governments of various regions are also backing this technology due to its features that outperform old incandescent and CFL lighting. In the current scenario, COB technology is a costly and complex process as compared to traditional lighting but it is expected that heavy investment in infrastructure from the companies and economy of scale will cut their cost in near future. Illumination in general lighting, backlighting, and automotives will be highly beneficiary areas. 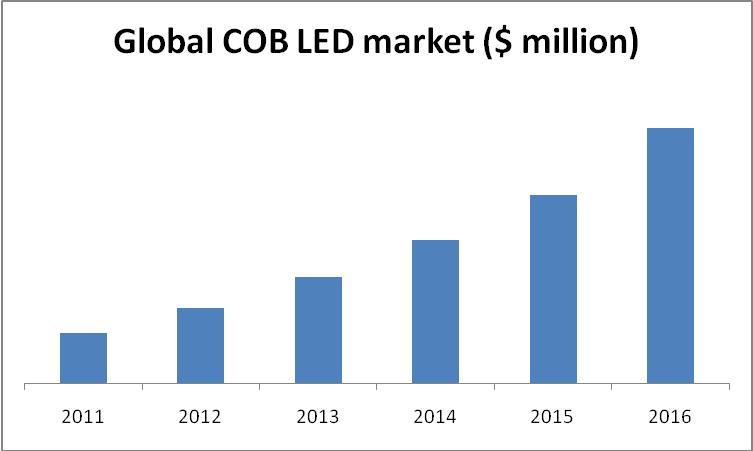