[170 Pages Report] The Global Electric Bus Market size is projected to reach 935 thousand units by 2027 from 137 thousand units in 2019, at a CAGR of 27.2%. Increasing focus of countries on promoting electrification of mass transit solutions and government support are propelling the growth of the electric bus market. 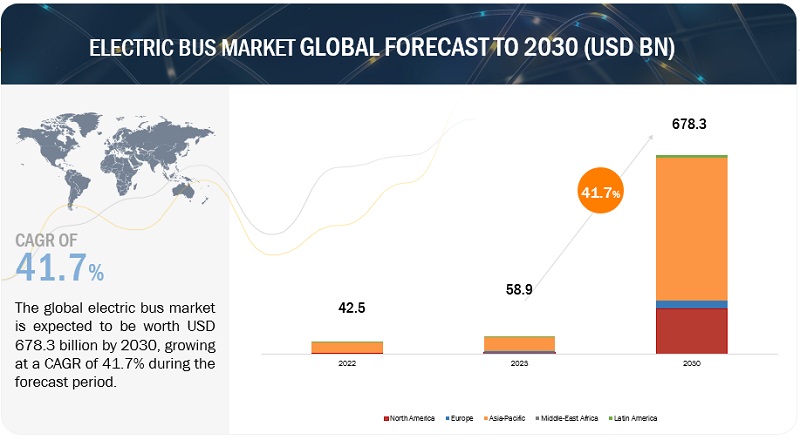 In the electric bus market, by length of bus, the 9–14 m segment is projected to be the largest market during the forecast in terms of volume. The 9–14 m segment is dominating the electric bus segment due to the large volumes of electric passenger buses used in public transport fleet. Most of the public transport fleets, especially in China, which accounts for almost 99% of the market, have electric buses that are 9–14 m in length. Also, many of the market leading OEMs such as BYD, Proterra, and Yutong have been providing electric buses in the 9-14 m length range. Countries that are planning to replace existing public fleets with electric ones are considering electric buses of the same length, which is mostly 9–14 m.

The Middle East & Africa, which includes Egypt, South Africa, and UAE, is projected to be the fastest growing market during the forecast period. The increasing demand for electric mass transit solutions, renowned OEMs expanding in the region, and government support are factors driving the Middle East & Africa electric bus market. For instance, in November 2019, Egypt’s Arab Organisation for Industrialisation (AOI) started its first smart electric bus in the country with the help of Shanghai Wanxiang Group, China. Also, in May 2019, Foton Motor signed an agreement with Egypt’s Military Production Ministry to manufacture more than 2,000 electric buses in the country over the next four years. Middle East & Africa has become a key region for OEMs to explore, as major countries in the Middle East & Africa, such as Egypt, Africa, and UAE, have high demand for public transport due to the increasing number of tourists visiting these countries. Thus, governments are planning to replace the existing public transport with more efficient and emission-free public transport because of emission concerns. 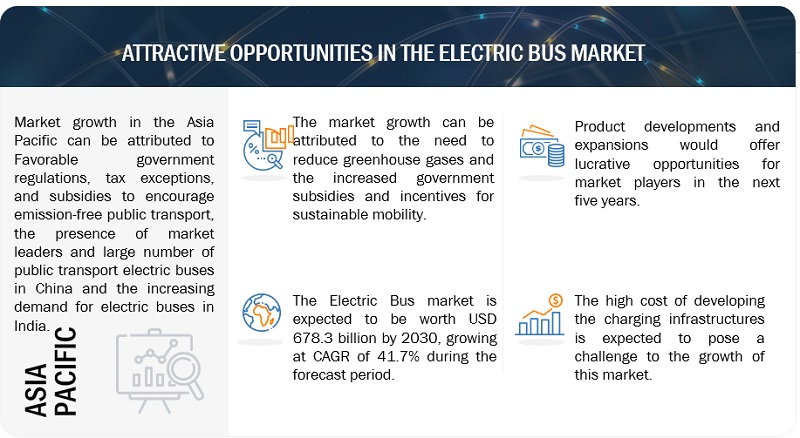 The Asia Pacific region is the largest electric bus market in the world. It comprises some of the fastest developing and developed economies in the world. The growth in the region can be attributed to the dominance of the Chinese market and presence of leading OEMs such as BYD, Yutong, Zhongtong, and Ankai in the country as well, resulting in exponential growth of the Asia Pacific electric bus market. Also, Shenzhen was the first city in the world to have a fully electrified public transport fleet. The favorable regulations for electric buses, availability of electric and electronic components at cheaper rates, and rapidly growing charging infrastructure are projected to boost the electric bus market in the region.

The global electric bus market is dominated by major players such as BYD (China), Yutong (China), Proterra (US), VDL Groep (Netherlands), and AB Volvo (Sweden). These companies have strong distribution networks at a global level. In addition, these companies offer an extensive product range in this market. These companies have adopted strategies such as new product developments, collaborations, and contracts & agreements to sustain their market position.

Electric Bus Market, Based on the Consumer Segment:

Electric Bus Market, Based on Application:

Electric Bus Market, Based on the Length of Bus Type:

Electric Bus Market, Based on Range:

Electric Bus Market, Based on Region:

1 Introduction
1.1 Objectives
1.2 Market Definition
1.3 Market Scope
1.3.1 the Market Size Covered in the Study Would be on Electric Bus Sales Only as Authenttic Production Data is Not Available
1.3.2 Years Considered for the Study
1.4 Currency & Pricing
1.5 Package Size
1.6 Limitations
1.7 Stakeholders

The study involved four major activities in estimating the current market size of the electric bus market. Exhaustive secondary research was done to collect information on the market, the peer market, and the parent market. The next step was to validate these findings, assumptions, and sizing with the industry experts across value chains through primary research. The top-down and bottom-up approaches were employed to estimate the complete market size. Thereafter, market breakdown and data triangulation processes were used to estimate the market size of segments and subsegments.

Extensive primary research has been conducted after acquiring an understanding of electric bus market scenario through secondary research. Several primary interviews have been conducted with market experts from the demand- and supply-side OEMs (in terms of component supply, country-level government associations, and trade associations) and component manufacturers across three major regions, namely, Asia Pacific, Europe, North America, Latin America, and Middle East & Africa. Approximately 30% and 70% of primary interviews have been conducted from the demand and supply side, respectively. Primary data has been collected through questionnaires, emails, LinkedIn, and telephonic interviews. In the canvassing of primaries, we have strived to cover various departments within organizations, such as sales, operations, and administration, to provide a holistic viewpoint in our report.

After interacting with industry experts, we conducted brief sessions with highly experienced independent consultants to reinforce the findings from our primaries. This, along with the in-house subject matter experts’ opinions, has led us to the findings as described in the remainder of this report. Following is the breakdown of primary respondents.

After arriving at the overall market size—using the market size estimation processes as explained above—the market was split into several segments and subsegments. To complete the overall market engineering process and arrive at the exact statistics of each market segment and subsegment, data triangulation and market breakdown procedures were employed, wherever applicable. The data was triangulated by studying various factors and trends from both the demand and supply sides.

With the given market data, MarketsandMarkets offers customizations in line with the company’s specific needs.