[250 Pages Report] The electric van market is projected to register a CAGR of 33.6% from 2022 to 2030, reaching 1,082.9 thousand units by 2030 from 106.8 thousand units in 2022. Countries like the US, Japan, China, Germany, and the UK have a significant share of electric vans due to rising demand for environment-friendly vehicles. However, in India, South Korea, and other developing countries, electric vans are still at the initial stage of adoption. The lack of charging stations and the high cost of electric vans can hinder the market’s growth in these countries. The electric van market growth is significantly being fueled by the rising demand from the Europe region.

Europe has stringent emission regulation standards, and the governments of countries in this region are providing huge incentives to promote electric vehicles. As a result, the demand for electric vans has increased tremendously in the region. Electric vans are extensively used in various sectors, such as logistics, e-commerce, and public transportation. 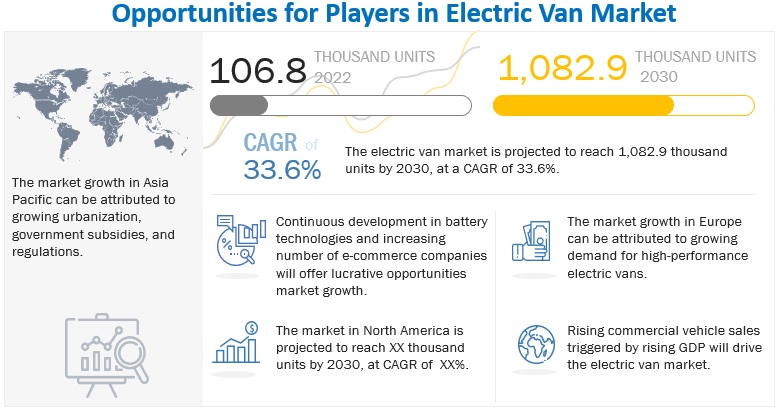 The transport sector is one of the largest contributors to global greenhouse gas (GHG) emissions. According to the United Nations Environment Program (UNEP), the transport sector contributes around one-quarter of greenhouse gas (GHG) emissions and is one of the largest sources of air pollution. Vehicle emissions are responsible for discharging 29% of ozone-depleting substances that bring air pollution and are dangerous to the atmosphere. Various governments across the globe have introduced initiatives to make their urban public transport system more sustainable and fuel-efficient with the use of electric vans. The introduction of electric vans will change mass transit worldwide in the coming years by improving air quality, reducing noise levels, and increasing fuel efficiency.

Many electric commercial vehicle fleet owners are concerned about the range or distance covered in a single charge. The driving range of electric vans is shorter than that of ICE commercial vans. Many ECVs cover distances between 80 miles and 120 miles because of the low energy density of batteries. The maximum coverage of an ECV is ~300 miles. Users prefer covering long distances without interruptions, especially for long trips, and a long-range EV is significantly high priced. This factor could inhibit the growth of the electric van market. Various R&D efforts are undertaken to reduce the space required for housing and contacts so that more batteries can be accommodated, and the van range can be increased to approximately 600 miles. FCEVs have a huge opportunity for electric vans due to the less demand for frequent charging (which hampers commercial use in many cases).

In order to drive the commitment to reduce greenhouse gas (GHG) emissions and improve air quality in urban areas, governments across the globe have been providing lucrative fiscal incentives to promote shared mobility and clean transportation. Governments across the globe have launched attractive initiatives and schemes to facilitate the adoption of electric vehicles. Governments in developed countries have begun the tender process to increase the use of electric vans in their cities. For instance, as of March 2022, Royal Mail conducted its delivery using 3,000 electric vans. The roll-out largely follows cities with low-emission zones, including London, Bristol, Glasgow, Cambridge, and Oxford. The induction of e-vans will add to the emission reduction commitments at the local level. The benefits will be much greater with the simultaneous greening of electricity generation in highly populated cities like China, Japan, and India.

The growth of the electric van market has been restrained due to the limited availability of supporting infrastructure. Every electric vehicle periodically requires a battery charging facility. Charging infrastructure is installed in urban areas in Europe, North America, and other developed regions. However, the number of charging stations is insufficient. The number of charging stations in Eastern Europe is lesser than that in Northern Europe. In Asia Pacific, China is leading in terms of the availability of charging stations. The time taken to recharge a vehicle further adds to the inconvenience. As of 2022, only a few companies provide fast chargers. As chargers are available in different designs and every charger uses a different connector, finding a suitable charger can be cumbersome. The lack of charging infrastructure is a major problem in developing economies such as India, South Africa, and South Korea. India has adequate infrastructure for internal combustion engine vehicles with as many as 77,000 fuel stations across the country.

Field services include maintenance, installation, or repair of hardware equipment at the customer’s site. These services are required in sectors such as gas utilities (to repair suspected leaks), healthcare, property maintenance, HVAC (for installation management), telecommunications (for cable installation or other issues), transportation, heavy engineering, and mining. Companies are keen on adopting electric commercial vehicles such as electric vans for daily field operations, maintenance, repair, other field services, and replacing diesel fleets. In March 2022, London Electric Vehicle Company announced its plan to supply 22 VN5 electric vans to Sunbelt Rentals for fleet operations.

Governments in the Asia Pacific region have recognized the growth potential of the automotive industry and have consequently taken different initiatives to encourage major OEMs to enter their domestic markets. Several European and American automobile manufacturers, such as Volkswagen (Germany), Mercedes Benz (Germany), and General Motors (US), have shifted their production plants to emerging economies. Hence, the electric van market will grow. The Chinese government is also encouraging state governments and public organizations to increase the use of electric vehicles for logistics purposes to more than 50% by 2025. In India, the electric van market is at a nascent stage. However, the government is undertaking various initiatives to promote the use and sale of electric vehicles. These include the National Electric Mobility Mission Plan (NEMMP) and Faster Adoption and Manufacturing of Hybrid & Electric Vehicles (FAME). 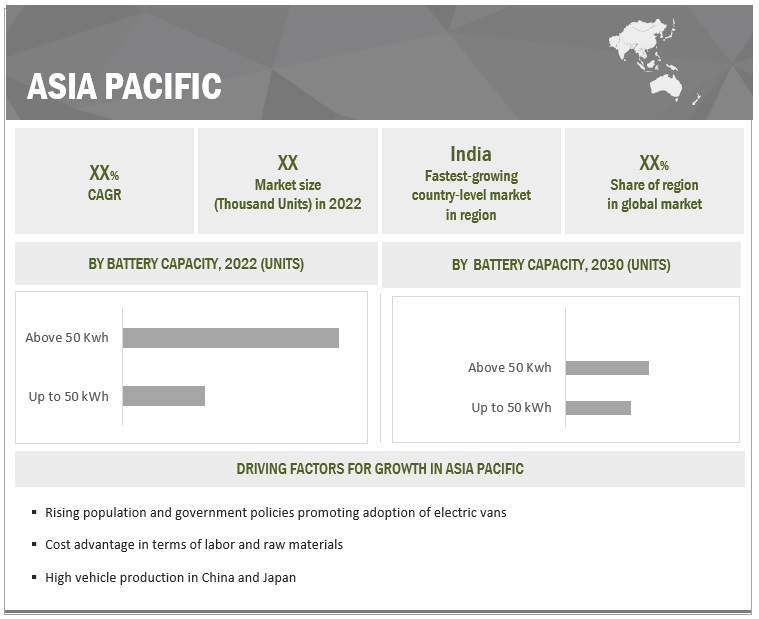 The key players considered in the analysis of the electric van market are General Motors (US), Renault (France), Toyota Motor Corporation (Japan), BYD (China), and Ford Motor Company (US). These companies offer extensive products for the automotive industry and have strong distribution networks, and they invest heavily in R&D to develop new products.


This research report categorizes the electric van market based on range, battery capacity, battery type, propulsion, end use, and region

What are the different segments covered in the electric van market?

The electric van market has been segmented based on range, battery capacity, battery type, propulsion, end use, and region.

Who are the major players in the electric van market?

What are the new market trends impacting the growth of the electric van market?

The electric van market has witnessed rapid evolution with ongoing developments in engineering and technology. Technological advancements, such as battery swapping, the use of high-performance batteries, and high motor power, have boosted the demand for electric vans.

Which regions are considered in the electric van market?

The report covers market sizing for regions such as Asia Pacific, Europe, and North America. .

The study involved four major activities in estimating the current size of the electric van market. Exhaustive secondary research was carried out to collect information on the market, the peer market, and the parent market. The next step was to validate these findings, assumptions, and sizing with the industry experts across value chains through primary research. The top-down and bottom-up approaches were employed to estimate the complete market size. Thereafter, market breakdown and data triangulation processes were used to estimate the market size of segments and subsegments.

In the secondary research process, various secondary sources such as company annual reports/presentations, press releases, and industry association publications [for example, International Council on Clean Transportation (ICCT); Society of Manufacturers of Electric Vehicles (SMEV); corporate filings, such as annual reports, investor presentations, and financial statements; and trade, business] were used to identify and collect information useful for an extensive commercial study of the electric van market.

Extensive primary research was conducted after acquiring an understanding of the electric van market scenario through secondary research. Several primary interviews were conducted with market experts from both the demand (electric van manufacturers, country-level government associations, and trade associations) and supply (OEMs and component manufacturers) sides across major regions, namely, Asia Pacific, Europe, and North America, and primary interviews were conducted from the demand and supply sides, respectively. Primary data was collected through questionnaires, emails, and telephonic interviews. In the canvassing of primaries, various departments within organizations, such as sales, operations, and administration, were covered to provide a holistic viewpoint in this report.

After interacting with industry experts, brief sessions with highly experienced independent consultants were conducted to reinforce the findings from the primaries. This, along with the in-house subject-matter experts’ opinions, led to the findings described in the remainder of this report.

A detailed market estimation approach was followed to estimate and validate the volume of the electric van market and other dependent submarkets, as mentioned below:

After arriving at the overall market size—using the market size estimation processes as explained above—the market was split into several segments and subsegments. To complete the overall market engineering process and arrive at the exact statistics of each market segment and subsegment, data triangulation and market breakdown procedures were employed, wherever applicable. The data was triangulated by studying various factors and trends from both the demand and supply sides.

With the given market data, MarketsandMarkets offers customizations in line with company-specific needs.