The impregnating resins market is projected to reach USD 1.9 billion by 2025, at a CAGR of 6.5%. The major drivers for the market include increasing industrialization, rapid urbanization, and transformations in power generation, distribution & transmission infrastructure. The replacement of combustion engines in automobiles with electric motors is also boosting the demand for impregnating resins. 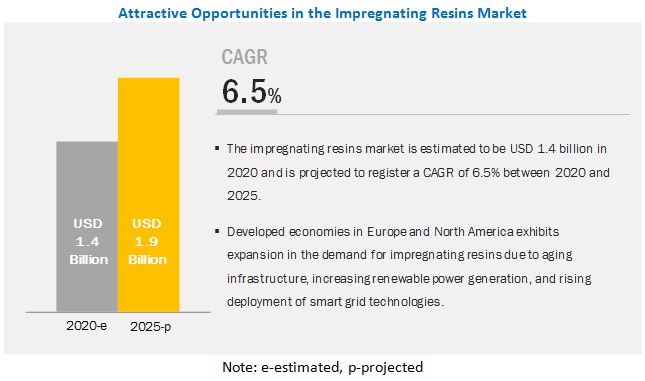 Based on type, the solventless resins segment is projected to lead the impregnating resins market during the forecast period.

Based on application, the automotive components application segment is projected to register the highest CAGR during the forecast period.

The automotive components segment is projected to register the highest CAGR between 2020 and 2025. Impregnating resins are used for the impregnation of starters & alternators in conventional vehicles and electric motors in electric vehicles. Accelerated decarbonization and stringent regulations to reduce greenhouse gas emission (GHG) are propelling the demand for electric vehicles, which are boosting the consumption of impregnating resins in this segment. Government initiatives, such as the development of charging infrastructure and subsidies on electric vehicles across the globe, are also driving the market in this application. 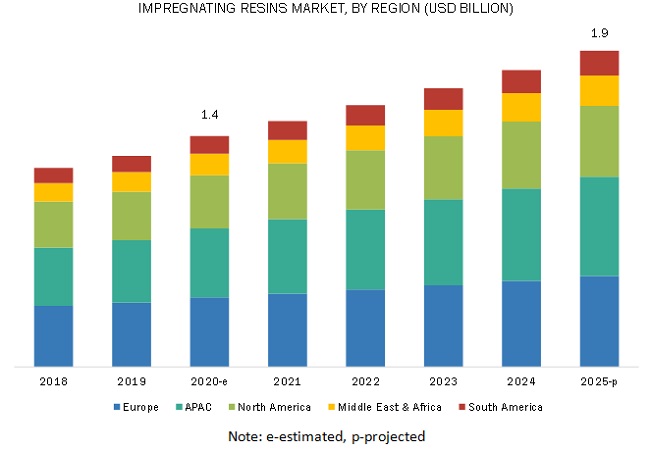 The impregnating resins market in APAC has immense growth potential driven by the rapid expansion of the manufacturing sector. APAC consists of some large and rapidly growing economies, such as China, India, Indonesia, Malaysia, Vietnam, and Thailand. Across these economies, local governments are making efforts to build infrastructure for industrial expansion and to attract foreign direct investments (FDI). The major drivers for the impregnating resins market in APAC are the electrification of rural areas in the developing countries, rapid urbanization, availability of low-cost labor, and government reforms to expand the manufacturing industry.

Elantas (Germany), Axalta Coating Systems (US), Voll Roll Holdings (Switzerland), Kyocera Corporation (Japan), Henkel (Germany), and Hitachi Chemical Co., Ltd. (Japan) are some of the leading players with a substantial market share. Investment & expansion, agreement & collaboration, and new product launch were the major growth strategies adopted by the market players between 2017 and 2019 to enhance their product portfolio and meet the growing demand for impregnating resins in the emerging economies.

This research report categorizes the impregnating resins market based on type, application, and region.

7 IMPREGNATING RESINS MARKET, BY APPLICATION
7.1 INTRODUCTION
7.2 MOTORS & GENERATORS
7.3 TRANSFORMERS
7.4 HOME APPLIANCES
7.6 AUTOMOTIVE COMPONENTS
7.5 OTHERS
*Only qualitative data will be provided for the sub-segment.

The study involved four major activities in estimating the current impregnating resins market size. The exhaustive secondary research was done to collect information on the market, peer market, and parent market. The next step was to validate these findings, assumptions, and sizing with industry experts across the value chain through primary research. Both top-down and bottom-up approaches were employed to estimate the total market size. After that, the market breakdown and data triangulation methodologies were used to estimate the market size of segments and subsegments.

In the secondary research process, various sources were referred to for identifying and collecting information for this study. The secondary sources included annual reports, press releases & investor presentations of companies; white papers; certified publications; articles from recognized authors; authenticated directories; and databases. Secondary research was mainly conducted to obtain essential information about the supply chain of the industry, the monetary chain of the market, the total market players, market classification and segmentation according to industry trends to the bottom-most level, regional markets, and key developments from both the market- and technology-oriented perspectives.

In the primary research process, various primary sources from both the supply sides and demand sides were interviewed to obtain qualitative and quantitative information for this report. The primary sources from the supply side included industry experts, such as chief executive officers (CEOs), vice presidents (VPs), marketing directors, technology & innovation directors, consultants, managers, and related key executives from major companies and organizations operating in the market. The primary sources from the demand side included lab technicians, technologists, and sales/purchase managers from end-use industries.

Following is the breakdown of primary respondents

Both the top-down and bottom-up approaches were used to estimate and validate the total size of the impregnating resins market. These methods were also used extensively to determine the size of various sub-segments in the market. The research methodology used to estimate the market size includes the following:

After arriving at the overall market size-using the estimation processes as explained above-the market was split into several segments and sub-segments. To complete the overall market engineering process and arrive at the exact statistics of each market segment and subsegment, the data triangulation, and market breakdown procedures were employed, wherever applicable. The data was triangulated by studying various factors and trends from both the demand and supply sides in the medical device sector.