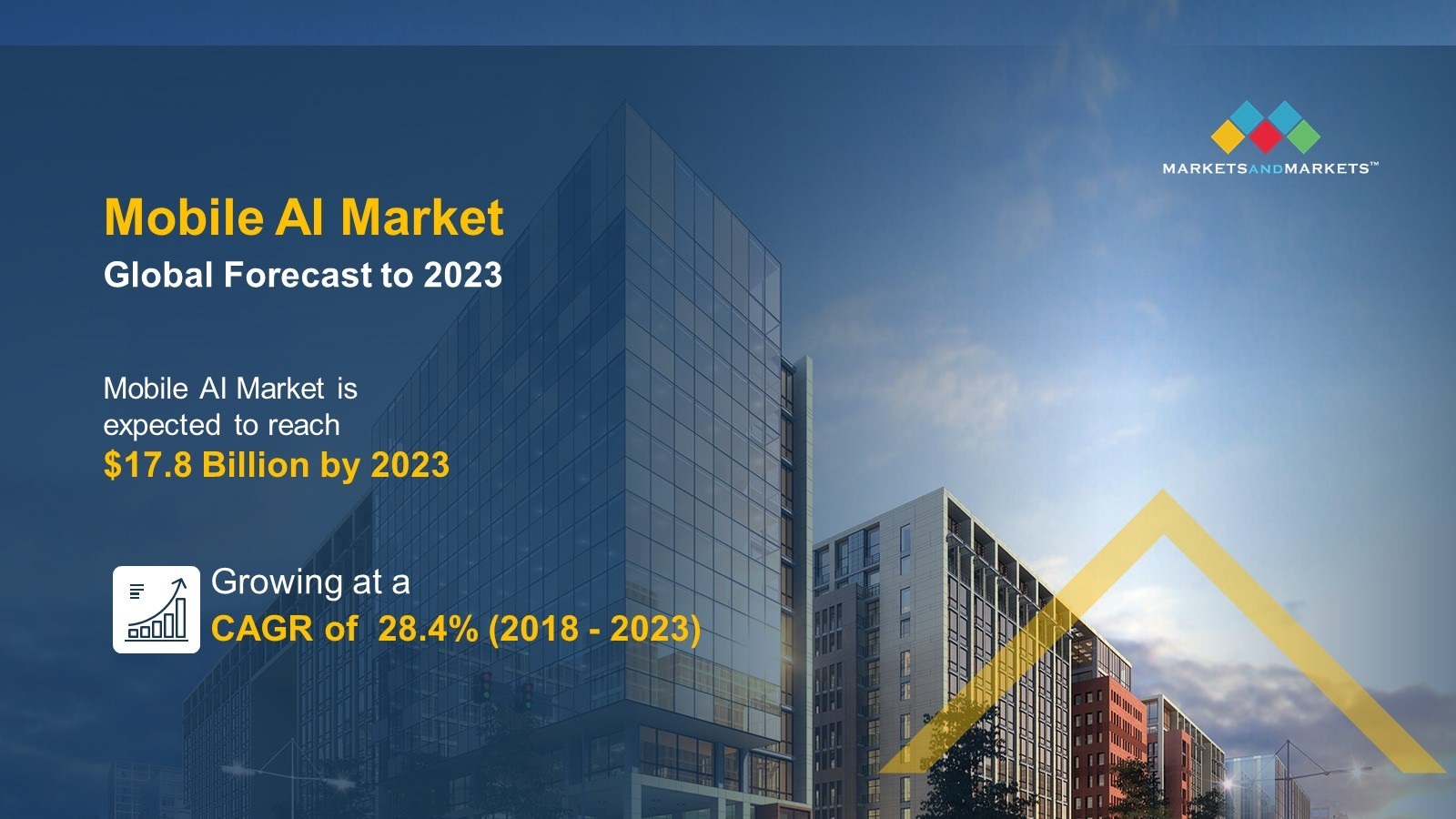 The use of the Mobile Artificial Intelligence (AI) Market has been mainly prevalent across automotive, smartphones, drones, and robotics. Increasing demand for real-time speech and voice recognition and analysis, as well as technical advancements in smartphone image recognition, is driving the market for smartphone AI processors. The majority of AI processors have an additional inbuilt Neural Processing Unit (NPU) that can handle significant amounts of parallel processing, uses low power, and is capable of cognitive tasks.

There is a rapid increase in the use of drones due to various reasons; some of which are increased venture funding, a rise in the demand for drone-generated data for commercial applications, as well as rapid technological advancements. Next-generation drones are likely to be powered by artificial intelligence (AI), which will allow drones and other machines to make decisions and operate independently without any human intervention. Drones consist of a range of cameras and sensors feeding data into small chips called a vision processing unit (VPUs). VPU is a processor used in drones, along with advanced algorithms. These processors boost the use of drones for machine vision applications, such as object detection, gesture mode, safe landing, 3D mapping, and contextual awareness.

In the past years, cloud-based complex AI algorithms could not accomplish tasks on computers, mobile phones, and other devices.

This limitation became a roadblock for rapid adoption of AI in consumer devices. It has led to tier-one semiconductor hardware manufacturers, including smartphone vendors, increasingly focusing on exploring application processor designs and frameworks that will fetch AI on the device rather than on the cloud. Connectivity in mobile devices experiences high latency, network congestion in densely populated areas, and increased levels of signal collision due to oversaturated use of available spectrums/increasing traffic in available spectrums.

On-device processors can help mobile equipment compute data in real-time with minimum latency (much lower compared to cloud). This low latency attribute is a critical design aspect for drones, augmented reality solutions, cameras, and autonomous and semiautonomous cars, as they require running deep learning algorithms in real-time for making quick decisions. Any delay stemming from latency in the communication can result in disastrous or fatal outcomes. At the moment in the market, Apple (US) and Google (US) are using AI capable processors in their flagship smartphone products. However, with the increased use of AI in autonomous cars, drones, and other mobile devices, more players are expected to enter this market during the forecast period.

AI is a complex system, and for developing, managing, and implementing AI systems, companies require personnel with certain skill sets. For instance, people dealing with AI systems should also be aware of technologies such as cognitive computing, ML and machine intelligence, deep learning, and image recognition.

In addition, integrating AI solutions with existing systems is a difficult task, which requires extensive data processing to replicate the behavior of a human brain. Even minor errors can translate into system failure or malfunctioning of a solution, which can drastically affect the outcome and desired result.

Professional services of data scientists and developers are needed to customize an existing ML-enabled AI service. Due to AI being a technology still in the early stages of its life cycle, a workforce possessing in-depth knowledge of this technology is limited. The impact of this restraining factor will likely remain high during the initial years of the forecast period

Edge computing technology is used to move data processing close to the source of data rather than limiting the processing power in cloud/data centers.

The combination of IoT and edge computing can reduce latencies and increase the penetration of AI in industries. Self-driving cars, robotics, and predictive maintenance are expected to leverage AI edge computing significantly during the forecast period.  Service robots in industries and homes can use AI technologies such speech and voice recognition, computer vision, and more sophisticated analytics tools.

Moreover, the use of edge computing in motion detectors, video surveillance, environmental sensors, and other security and monitoring devices can further enhance levels of automation in security and monitoring processes. In industries, predictive maintenance is also an area where edge AI can enhance IoT systems' latency and overall performance. Edge computing and AI can together reduce maintenance time and costs in the road transportation, railways, and aerospace industries.

AI is implemented through machine learning using a computer to run specific software that can be trained. Machine learning can help systems process data with the help of algorithms and identify specific features from that dataset.

However, a concern associated with such systems is that it is unclear as to what is going on inside algorithms; internal workings remain inaccessible and unlike humans, the answers provided by these systems are uncontextualized. In July 2017, researchers at the Facebook AI Research (FAIR) lab found that the chatbot they created had deviated from their predefined script and were communicating in a language they created, which humans could not understand.

While one of the important goals of current research is to improve AI-to-human communication, the possibility that an AI system can create its own unique language that humans cannot understand could be a setback. Several scientists and tech influencers, such as Stephen Hawking, Elon Musk, Bill Gates, and Steve Wozniak, have indeed raised concerns about future AI technology leading to unintended consequences. 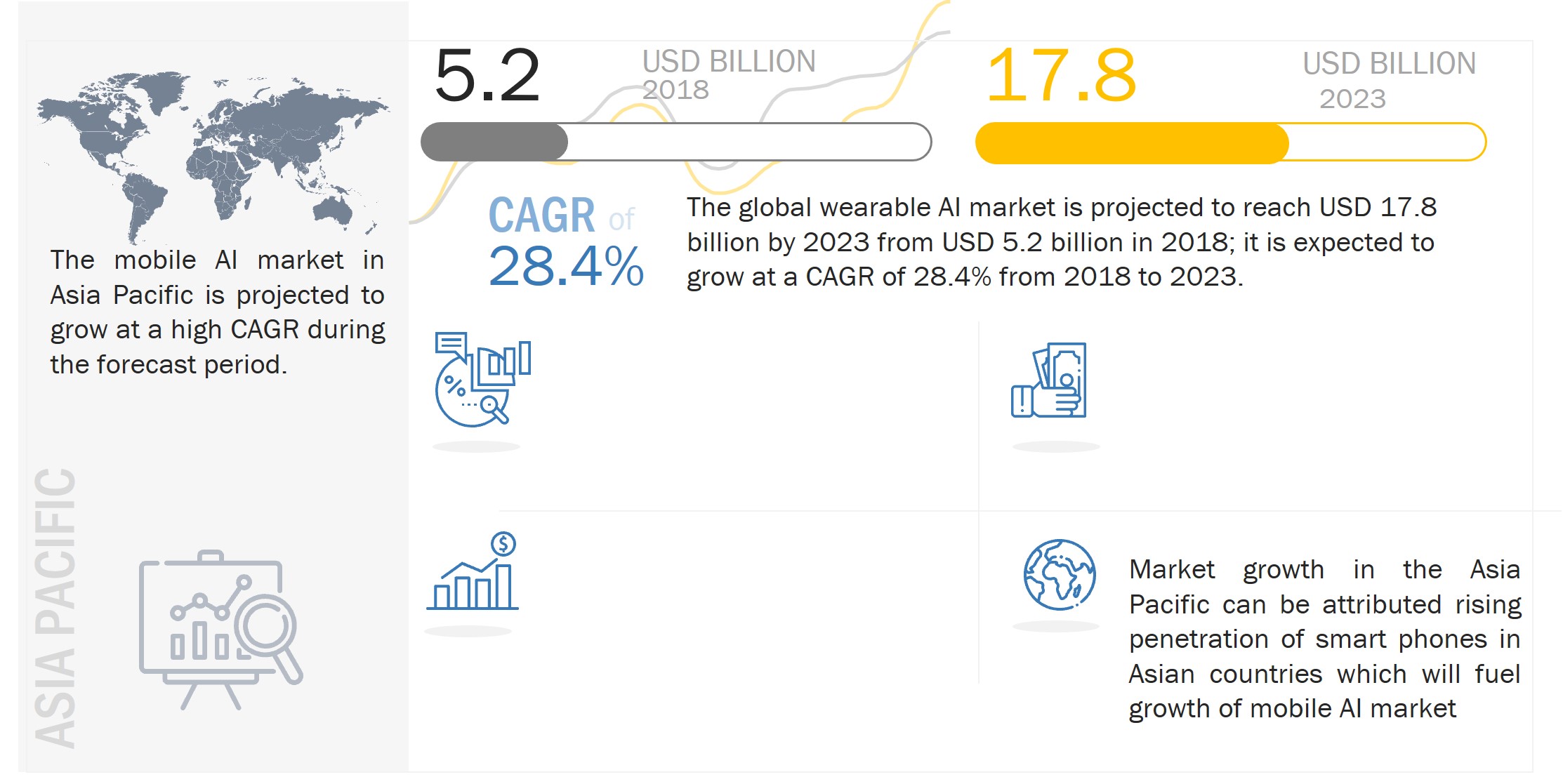 Based on application, AR/VR, to hold grow at the highest CAGR during the forecast period

Based on application, the mobile AI market has been segmented into smartphones, automotive, cameras, drones, robotics, AR/VR, and others (smart boards and PCs). Virtual Reality (VR) and Augmented Reality (AR) are rapidly evolving technologies. AR and VR would provide smarter, more relevant, and personalized experience when coupled with AI.

By technology node, 10 NM node to hold the highest market share of the mobile AI market in Europe during the forecast period

The market for 10 NM node is expected to hold the largest share of the mobile AI market in Europe during the forecast period. The main factor driving the demand for 10nm nodes is the increasing use of 10nm technology nodes in new, high-end smartphones; advancements in 10nm technology node manufacturing afford more power-efficient processors, better battery life, and performance for smartphones.

Applications such as smartphones, industrial robots, and automotive have huge potential in APAC. With the growing penetration of smartphones in countries such as China, Japan, India, and South Korea, the adoption of AI processor-enabled smartphones in the Asia Pacific is expected to increase in the coming years. Asia Pacific is also one of the largest markets for smartphones, surveillance cameras, and wearable devices, which are integrated with vision processing units to accelerate AI tasks. 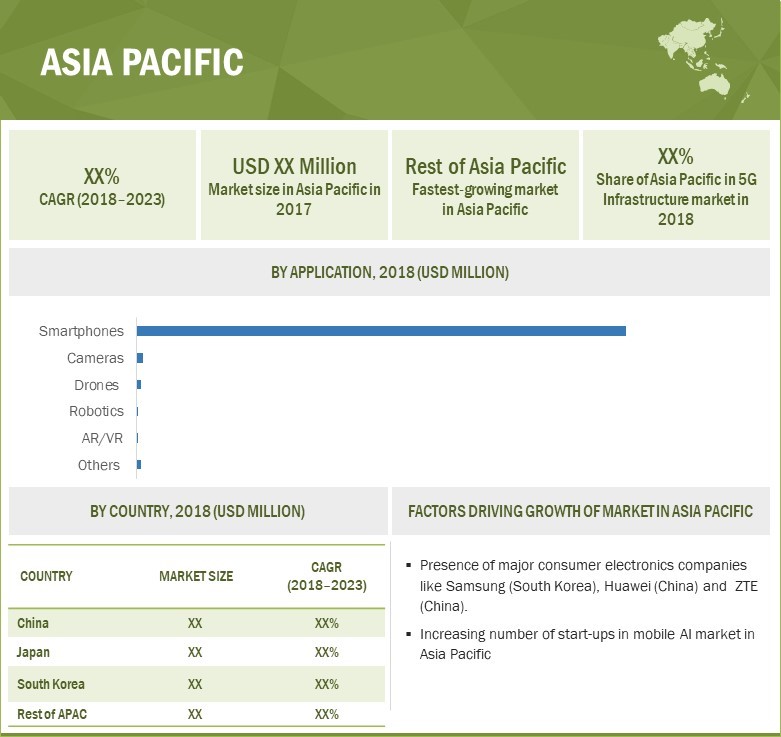 In the Asia Pacific region, countries such as China, South Korea, and Japan are estimated to witness significant growth in the mobile AI market during the forecast period. China is among the highest spenders on the manufacturing sector in the Asia Pacific. The manufacturing sector in China is growing rapidly, resulting in the introduction of new robotics and big data technologies. In addition, China, being a global manufacturing hub, holds immense potential for the automotive industry. These factors are expected to fuel the growth of the AI market in China as AI is increasingly being used in the country’s automotive and transportation sectors. Major industries driving the growth of the AI market in Japan include information and communication technology, manufacturing, automotive, machinery, and robotics.

High government funding and a strong technical base also contribute to the market's growth in this region. The markets for consumer drones and surveillance cameras, which use vision processing units, in North America are likely to grow significantly in the near future. Moreover, North America is home to prominent mobile AI technology vendors, such as IBM (US), Microsoft (US), and Google (US), and hardware providers, such as NVIDIA (US), Qualcomm (US), and Intel (US).

Some of the Major players in the mobile AI market are Apple (US), Qualcomm (US), NVIDIA (US), Huawei (China) and Intel (US).  These players have adopted various growth strategies such as Product launches and developments, partnerships, agreements, and collaborations further to expand their presence in the mobile AI market.

Apple (US) implements artificial intelligence (AI) and machine learning technologies in consumer and enterprise-level devices. The company has added various features, such as security and social networking, to its devices. The aforementioned devices highlight a trend where artificial intelligence (AI) is moving toward end devices instead of relying more on cloud services. This, as a result, has created opportunities for chip suppliers to bring robust chips and graphics processing units (GPUs) and other solutions, such as accelerators and vision processing units (VPUs), to the market. Apple mainly focuses on product launches and acquisitions to maintain its competitive position in the mobile AI market.

Qualcomm (US) is continuously growing in the mobile AI market. The company has R&D centers in various locations worldwide. Its robust R&D capabilities enabled it to develop a strong patent portfolio. Qualcomm focuses on organic and inorganic strategies, such as product launches, partnerships, and collaborations to grow in the market. The company’s Snapdragon mobile platform has accelerated the migration of intelligence from the cloud to edge devices in key device categories, including mobile, IoT, and automotive.

The research report categorizes the mobile artificial intelligence (AI) market into the following segments and sub-segments: 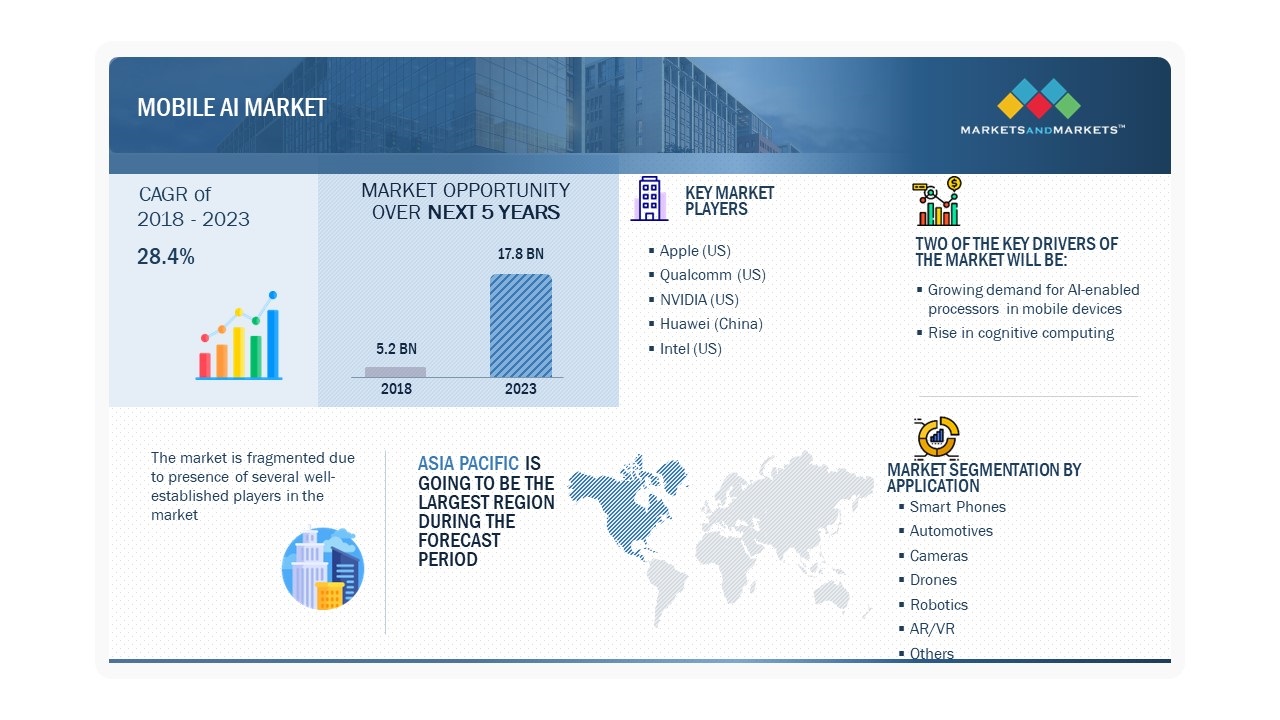 What is the current size of the mobile AI market?

Who are the winners in the mobile AI market?

What are some of the technological advancements in the market?

What are the factors driving the growth of the market?

The growth of the Mobile Artificial Intelligence (AI) market is driven by growing demand for AI-enabled processors in mobile devices, the rise in cognitive computing, and the growing number of AI applications.