[140 Pages Report] MarketsandMarkets projects the global edge computing market to grow from USD 2.8 billion in 2019 to USD 9.0 billion by 2024, at a Compound Annual Growth Rate (CAGR) of 26.5% during the forecast period. Factors such as growing adoption of Internet of Things (IoT) across industries; rising demand for low-latency processing and real-time, automated decision-making solutions; and a need for surmounting exponentially increasing data volumes and network traffic.

Moreover, the emergence of autonomous vehicles and connected car infrastructure, and the need for lightweight frameworks and systems to enhance the efficiency of edge computing solutions are expected to create ample opportunities for edge computing vendors. 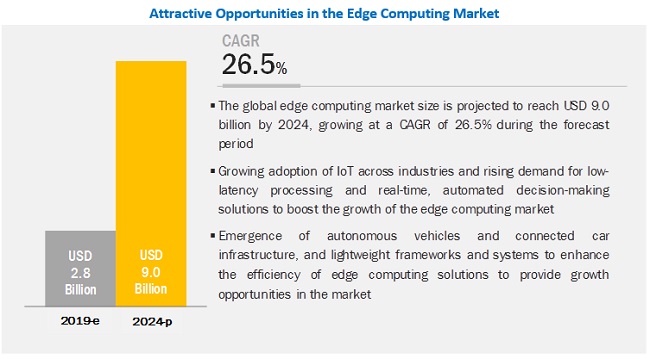 The edge computing market by component covers, hardware, platform, and services. The hardware component is estimated to hold the largest market size during the forecast period, owing to the large-scale deployment of hardware components for decentralizing storage and computing operations, enabling comprehensive edge infrastructure deployment, and reducing network traffic. Organizations offer advanced edge computing hardware that either acts as an initial point of data source (edge devices) or a facilitator of the entire network (gateways and servers); or serves as a storage and local processing unit (local data centres) in the overall edge computing process.

By deployment type, the cloud segment to record the highest CAGR during the forecast period

The cloud deployment type is expected to witness a faster growth rate in this market, as it is being rapidly accepted by various enterprises, because of its easy, flexible, affordable, and scalable features. It also provides the highest level of data security and dependability. Additionally, the installation cost for cloud-based edge computing solutions is lower than that of the on-premises solutions.

The adoption of edge computing solutions among large enterprises is high owing to the increased generation of data, which is attributed to the widespread geographical presence and customer base. Moreover, the increasing demand of employees to access computing resources and applications ubiquitously while ensuring proper data storage, drives the demand of edge computing solutions among large enterprises. For instance, large manufacturing companies need to correlate voluminous data generated from sensors or actuators attached to their physical assets, such as machines, turbines, factories, and lifts with historic information. Subsequently, this helps them to detect or forecast failures in the shortest possible time for avoiding downtime and loss in production.

The proliferation of IoT has led to a significant increase in data, due to which organizations are increasingly relying on centralized cloud computing and storage solutions. Migrating to the cloud for the entire IT infrastructure poses latency and economic feasibility issues. Hence, organizations using IoT sensors, actuators, and other IoT devices are increasingly looking for edge computing solutions, such as edge nodes, devices, and hyper-localized data centers. Edge computing supplements the existing cloud paradigm by facilitating data processing closer to the data source, thereby enabling organizations to speed up decision-making. For instance, Purdue University that uses IoT sensors and devices to study and improve plant growth and food production processes, partnered with an edge computing solution provider. With the partnership, the university now leverages the wireless and edge computing technologies to gather, collocate, process, and transmit the voluminous data generated by the sensors. Consequently, the technologies help the university save time and money by increasing the speed and accuracy of their research and facilitating faster communication.

Edge computing drives automation and improves the predictive accuracy of events, such as network outages, machine downtime, and weather change. For example, the Alaskan government uses smart sensors in combination with edge computing to send alerts to drivers, about weather and road conditions for preventing road accidents. In addition, edge computing also eliminates the disadvantages of cloud computing, such as DDoS attacks and cloud outages.

Enterprises are rapidly moving toward digitalization by adopting emerging technologies to automate and accelerate their business processes efficiently. Edge computing might reduce data transmission and storage costs through localized processing, but investing in edge infrastructure still adds to the CAPEX of companies. Companies looking for comprehensive edge computing solutions would require investing heavily in edge nodes, other edge devices, and edge data centers. They would also be required to spend more on making the devices and the entire network secure. Due to this, various content delivery enterprises are reluctant to move toward the edge, just for achieving low latency processing. For instance, in 2018, Netflix, a live and on-demand video streaming company, rejected the idea of investing in edge computing. The edge infrastructure cost is a restraining factor in the growth of edge computing market, though, with advancement and continuous R&D, the cost of edge technology is expected to reduce soon.

Rising consumer demands and various technological advancements have led to the proliferation of autonomous and connected vehicles infrastructure. Autonomous vehicles broadcast information about weather, light, and road conditions, and utilizes the same to navigate, control, and drive. As edge computing makes processing faster and closer to the source of data, there lie significant opportunities for edge computing to support the evolution of autonomous vehicles. Many companies have started reinventing the cloud through edge computing to support autonomous and connected car technologies, though it is still in the nascent stage. In 2017, AT&T announced its step toward building a network of edge data centers for autonomous cars, which is currently in the test phase.

Edge computing in autonomous cars can enable for more accurate and quicker utilization of the data collected, enabling edge data centers to offload non-critical data and retain important data within the vehicle. Combined with Artificial Intelligence (AI) and Machine Learning (ML), edge computing can also help achieve situational awareness within a fraction of time, by providing local processing power to speed up the processing of huge data generated through autonomous cars. This smart driving can help prevent road accidents and avoid traffic jams effectively. Owing to the benefits of edge computing, more autonomous car manufacturers are expected to invest in the technology in the near future, which is further expected to bolster the growth of the edge computing market.

Despite the benefits, edge computing architecture is susceptible to cyberattacks with the addition of vulnerable edge nodes and IoT devices. Many IoT devices, such as security cameras, smart doorbells, and baby monitors, have limited capability of authentication and encryption. Hence, they are prone to tampering, eavesdropping, malicious congestion, and identity forging. With the increasing number of IoT startups and rising competition, many small companies are relying on security through obscurity, while neglecting the risk of cyberattacks. As these devices lack in terms of robust IT hardware protocols, the users having less or no knowledge about IT security might lose critical data, paving the way for malware that could shun the entire edge network. This could also lead to large security breaches and can cause huge economic loss to the entire ecosystem. Eliminating authentication and enumeration vulnerabilities is the biggest challenge for IoT device manufacturers until the companies introduce some tough protocols and authentication systems within the devices.

Based on components, the edge computing market has been segmented as follows:

Based on applications, the market has been segmented as follows:

Based on organization sizes, the edge computing market has been segmented as follows:

Based on verticals, the market has been segmented as follows

Based on regions, the edge computing market has been segmented as follows:

Cisco (US), HPE (US), Huawei (China), IBM (US), Dell Technologies (US), Nokia (Finland), Litmus Automation (US), FogHorn Systems (US), SixSq (Switzerland), MachineShop (US), Saguna Networks (Israel), Vapor IO (US), ADLINK (Taiwan), Altran (France), and Axellio (US). HPE was founded in 2015 as a result of the split of Hewlett Packard into HP Inc. and HPE. It is a global pioneer in providing software, networking products, and solutions to its end users that range from small business startups to global leading enterprises. It has a wide range of solutions categorized into data storage, servers and systems, networking, and software solutions.

The study involved 4 major activities in estimating the current market size for edge computing hardware, platform, and services. An exhaustive secondary research was done to collect information on the market, peer market, and parent market. The next step was to validate these findings, assumptions, and sizing with the industry experts across the value chain through primary research. Both top-down and bottom-up approaches were employed to estimate the complete market size. Thereafter, market breakup and data triangulation were used to estimate the Edge Computing Market size of segments and subsegments.

In the secondary research process, various secondary sources, such as Bloomberg and BusinessWeek have been referred for, to identify and collect information for this study. The secondary sources included annual reports, press releases, and investor presentations of companies; white papers; journals; and certified publications and articles from recognized authors, directories, and databases.

Various primary sources from both supply and demand sides were interviewed to obtain qualitative and quantitative information for this report. The primary sources from the supply side included industry experts, such as Chief Executive Officers (CEOs), Chief Marketing Officers (CMO), Chief Technology Officers (CTOs), Chief Operating Officers (COOs), Vice Presidents (VPs), Managing Directors (MDs), technology and innovation directors, and related key executives from various leading companies and organizations operating in the edge computing market along with the associated service providers, and system integrators operating in the targeted regions. All possible parameters that affect the market covered in this research study have been accounted for, viewed in extensive detail, verified through primary research, and analyzed to get the final quantitative and qualitative data. Following is the breakup of primary respondents: 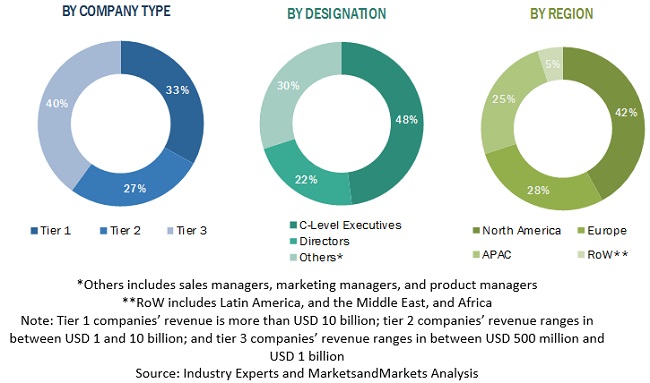 For making market estimates and forecasting the edge computing market, and the other dependent submarkets, the top-down and bottom-up approaches were used. The bottom-up procedure was used to arrive at the overall market size of the global edge computing market using key companies’ revenue and their offerings in the market. The research methodology used to estimate the market size includes the following:

With data triangulation and validation through primary interviews, the exact value of the overall parent market size was determined and confirmed using this study. The overall market size was then used in the top-down procedure to estimate the size of other individual markets via percentage splits of the market segmentation.

Interested in Edge Cloud Computing/Distributed Cloud as well as Serverless PaaS for the global market value and its predictions.