The mobile mass spectrometers market size is projected to reach USD 404 million by 2026, at a CAGR of 27.4% during the forecast period. Product architecture & ease of use and technological advancements coupled with stringent government regulations for pollution monitoring and control are high growth prospects for the mobile mass spectrometer market during the forecast period. 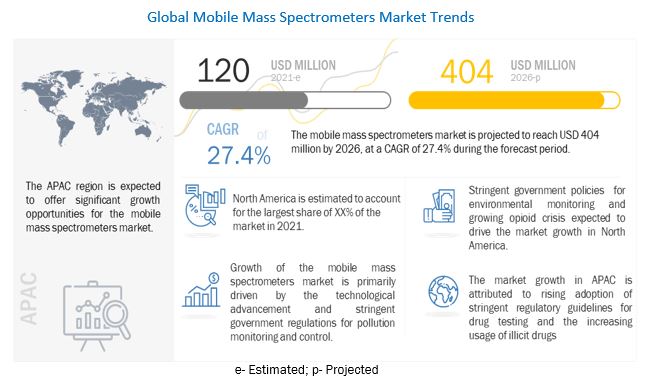 The evolution in design and performance of portable mass spectrometer systems has changed drastically in the past 20 years as they continue to advance towards high performance with chemical and/or matrix-specific proficiency depending on the area of application.

Capabilities afforded by portable mass spectrometer systems are beneficial to these end users because it enables adjustments to both operational and strategic decisions in real-time.

These improvements in technology are expected to result in the rapid commercialization of mobile mass spectrometer systems. For instance, the market for security applications is growing due to ongoing advancements such as inbuilt compound libraries.

Majority of commercially available portable MS systems are not universally suitable for large groups of users. They are still individually custom-built for specific applications.
Therefore, these systems are equipped with advanced features and functionalities and thus are high priced. Moreover, these instruments need periodic maintenance, leading to the increased overall cost of the equipment. This may restrain the growth of the mobile mass spectrometers market.

Increase in industrialization in regions such as the Asia Pacific, Middle East, and Africa has increased awareness among the people regarding environmental pollution and degradation. This has resulted in the implementation of numerous environmental protection acts. Because of the increase in pollution and environmental contamination, several amendments and new environmental safety standards are expected to be set up mainly in the developing economies in the next five years.

The progressive development of new testing methods for testing samples of contaminants such as pesticide residues, heavy metals, and organic chemicals is expected to play an important role in promoting the growth of the mobile mass spectrometers market.

It is reported that quantitative measures of performance such as resolution and detection limits are poorer in mobile mass spectrometers compared to those obtained with the corresponding conventional laboratory systems. This is primarily due to mechanical errors being relatively large compared to the scale of the miniaturized system.

By application, Environmental testing is the key application of mobile mass spectrometers. Rising global demand for in situ environmental monitoring is expected to drive the mobile mass spectrometer market. Moreover, regulations and legislations set forth by government organizations have triggered the testing, inspection, and certification of environmental samples tested by the government and manufacturing companies. Regulatory bodies have introduced guidelines for regulating the inspection, sampling, and testing services of environmental samples to detect the presence of pollutants and contaminants. These bodies have introduced various programs to generate awareness and set testing specifications to ensure the safety of the environment and reduce the health risks associated with a polluted environment.

By region, North America accounted for the largest market share in the mobile mass spectrometers market in 2020. A number of factors, such as growing greater government focus on narcotics detection and homeland security and opioid crisis are driving the growth of the North American mobile mass spectrometers market.  Moreover, in North American region the regulatory bodies are closely monitoring the safety and quality of the environment to establish environmental safety across the geographies. 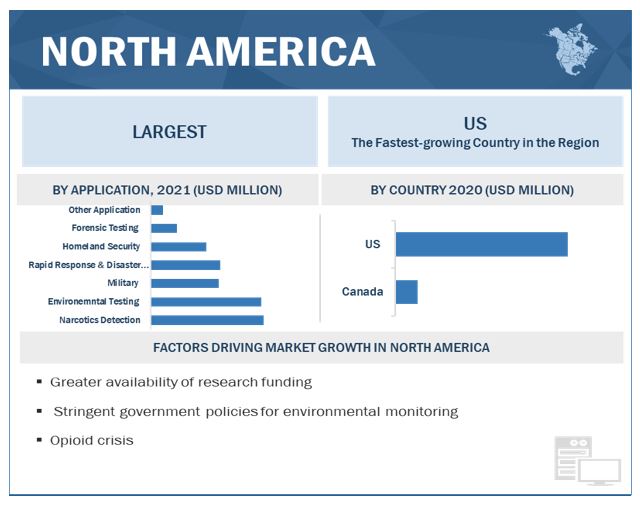 The major players in the mobile mass spectrometers market are FLIR (US), 908 Devices(US), PerkinElmer (US), Inficon (Switzerland), BaySpec (US)Bruker Corporation (US), PURSPEC (US), Focused Photonics (China), 1st detect (US), and Kore Technology(UK) among others.

What is the expected addressable market value of mobile mass spectrometers market over a 5-year period?

The global mobile mass spectrometers market size is valued at USD 120 million in 2021 and is expected to reach USD 404 million by 2026, at a CAGR of 27.4% during the forecast period.

Which application segment is expected to garner the highest traction within the mobile mass spectrometers market?

What are the strategies adopted by the top market players to penetrate across emerging regions?

The key growth strategies adopted by the top players in this market include product launches and upgradations, agreements, and partnerships.

What are the major factors expected to limit the growth of the mobile mass spectrometers market?

The high cost of mobile mass spectrometers is expected to limit market growth in the forecast years. Moreover, concerns related to technical efficacy of the product are also expected to challenge market growth to a certain extent. .

This study involved four major activities in estimating the current size of the mobile mass spectrometers market. Exhaustive secondary research was done to collect information on the market, peer market, and parent market. The next step was to validate these findings, assumptions, and market sizing with industry experts across the value chain through primary research. Both top-down and bottom-up approaches were used to estimate the total market size. After that, the market breakdown and data triangulation were done to determine the market size of the segments and sub-segments.

The mobile mass spectrometers market comprises several stakeholders, such as end-product manufacturers, raw material providers, and end-users in the supply chain. The demand-side of this market is characterized by its end-users, such as military & defense organizations, security agencies, and environmental testing laboratories among others. The supply-side is characterized by raw material providers, integrators, and others. Various primary sources from both the supply and demand sides of the market were interviewed to obtain qualitative and quantitative information. The breakdown of primary respondents are given below: 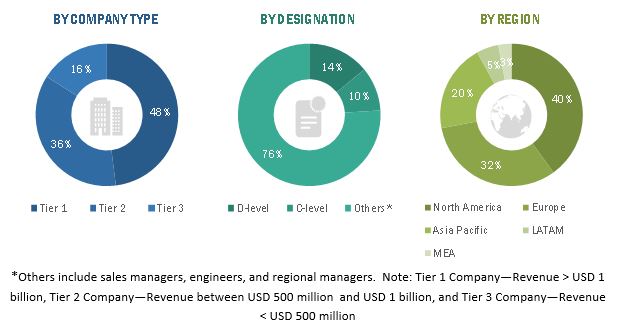 Both top-down and bottom-up approaches have been used to estimate and validate the size of the mobile mass spectrometers market and its dependent submarkets. These methods were also used extensively to determine the extent of various sub-segments in the market. The research methodology used to estimate the market size includes the following:

After arriving at the overall market size—using the market size estimation processes as explained above—the market was split into several segments and subsegments. To complete the whole market engineering process and arrive at the exact statistics of each market segment and subsegment, data triangulation, and market breakdown procedures were employed, wherever applicable. The data was triangulated by studying various factors and trends from both the demand and supply sides in the end-use industries.

With the given market data, MarketsandMarkets offers customizations as per the client’s specific needs. The following customization options are available for the mobile mass spectrometers market report: