[287 Pages Report] The Satellite Data Services Market was valued at USD 5.9 billion in 2021 and is projected to reach USD 16.7 billion by 2026, at a CAGR of 23.0% from 2021 to 2026. This market is expected to witness exponential growth owing to the surge in demand for satellite imagery data across various industries. 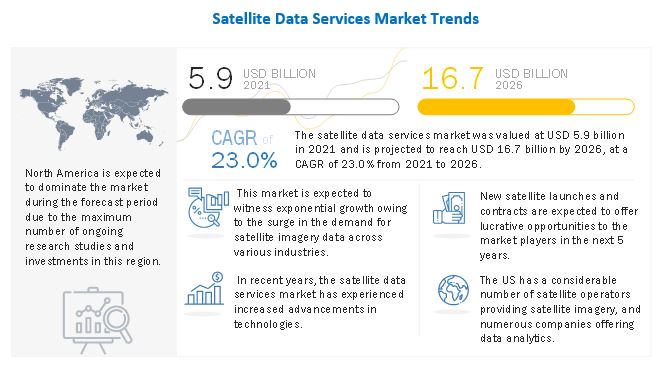 Earth observation services primarily cover the monitoring of agricultural fields, detection of climatic changes, disaster mitigation, meteorology, and several other resources. The requirement of high-resolution Earth imaging has increased across verticals, as these images can be used for various purposes, such as precise management of land, water, and forest resources. The US government is the largest purchaser of satellite imagery today. For this reason, most smallsat companies, US-based and others, see the US government as a stable long-term customer to get started with.

Government policies at both the nation-state and international levels directly or indirectly influence the evolution of the satellite data services ecosystem and industry. Currently, there is no comprehensive global or domestic on-orbit regulation regime. There are regulations related to the launch and re-entry of satellites in the spectrum, and remote sensing in the US; for example, there are no regulations related to on-orbit activities, such as rendezvous and proximity operations, space-based space situational awareness (SSA), or RF mapping. Internationally, with more than 75 countries engaged in satellite data services activities, a consensus has not been reached, and there are a few indicators that depict that there will be a comprehensive global regime beyond the high-level dictates in the Outer Space Treaty.

The US government invests in every part of the smallsat ecosystem and is likely to continue investing, both in the upstream and downstream, which would positively impact the Satellite Data Services Market. The more interesting development is the increasing investments in smallsats by other governments around the world.

Space debris refers to the uncontrolled and unwanted fall of no longer functional space vehicles or parts of any size onto earth. Since the beginning of human activities in space, the number of variously defined objects in orbit around the earth has increased exponentially, and the trend is up now more than ever with the new wave of small satellites. NASA and the European Space Agency estimate in their web pages that over 150 million objects are orbiting between the lower earth orbit (LEO) up to 10,000 km from earth’s surface and geostationary earth orbit (GEO), above this mark, for a total weight of more than 5,000 tons.

Based on vertical, the agriculture segment is expected to grow from USD 1billion in 2021 to USD 3 Billion by 2026, at the highest CAGR of 23.7% from 2021-2026. Satellite imagery helps in assessing detailed estimation of crop conditions and yields, the health status of the crops, and the quality of vegetation.

Based on service, the data analytics segment is expected to grow at a higher CAGR of 19.4% during the forecast period. Rising demand for data analytics services like image data processing, feature extraction, digital models, and classification, required to develop GIS maps and analyze data presented in a satellite image would boost the market.

Based on end-use, the government & military segment is projected to grow from USD 1,431 million in 2021 to USD 4,151 million by 2026 with a CAGR of 23.7% during the forecast period. Increased use of high-quality satellite imagery in the defense sector across nations boosts this segment.

North America is expected to dominate the market during the forecast period, due to the maximum number of ongoing research studies and investments, the existence of updated infrastructure to undertake space programs, and increased adoption of commercial satellite imaging across industries in the region. 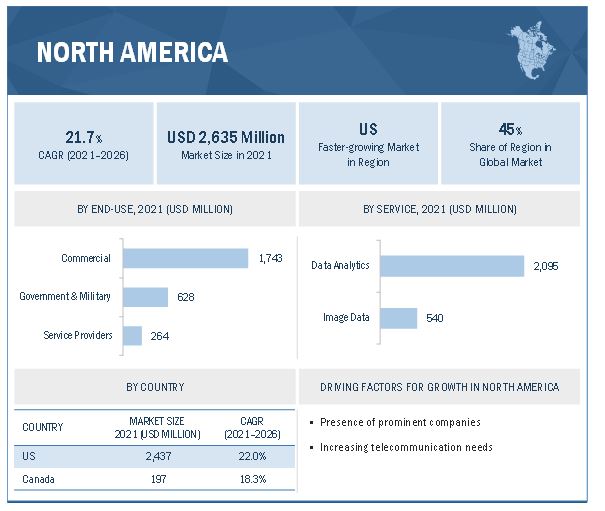 Artificial intelligence (AI) is disrupting every sector, and Earth observatory (EO) is no exception. AI refers to programs that help in completing tasks that would require human intelligence, such as data analysis, visual perception, speech recognition, and decision-making.

This research report categorizes the satellite data services market based on by vertical, end use, service, deployment and regions.

What are your views on the growth prospect of the Satellite data service market?

Response: The Satellite data service market is expected to grow substantially owing to Growth of earth observation imagery and analytics.

What are the key sustainability strategies adopted by leading players operating in the Satellite data service market?

Response: Key players have adopted various organic and inorganic strategies to strengthen their position in the Satellite data service market. The major Maxar Technologies (US), Planet Labs, Inc. (US), Satellite Imaging Corporation (US), ICEYE (Finland), Earth-i Ltd. (UK), and Airbus (Netherlands) have adopted various strategies, such as contracts and agreements, to expand their presence in the market further.

What are the new emerging technologies and use cases disrupting the Satellite data service market?

Response: Some of the major emerging technologies and use cases disrupting the market include Artificail Intelligence for analytics based decision making, advancemnets in onboard sensor technology, and cloud computing for image storage, etc.

Who are the key players and innovators in the ecosystem of the Satellite data service market?

Which region is expected to hold the highest market share in the Satellite data service market?

Response: Satellite data service market in The North America region is estimated to account for the largest share of XX% of the market in 2021. The market in the asia pacific region is expected to grow at the highest CAGR of XX% during the forecast period.

Secondary sources that were referred to for this research study included financial statements of companies offering satellite data or imagery services and information from various trade, business, and professional associations, among others. The secondary data was collected and analyzed to arrive at the overall size of the satellite data services market, which was validated by primary respondents. 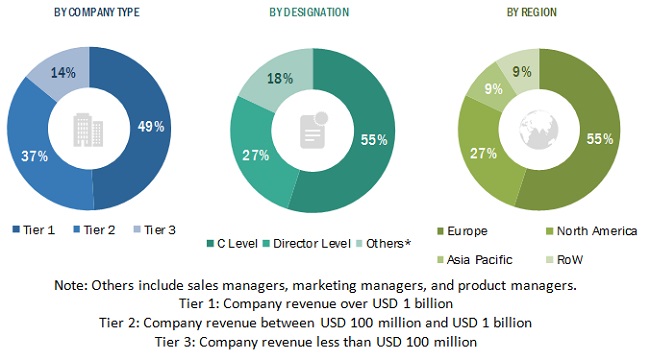 After arriving at the overall size of the satellite data services market from the market size estimation process explained above, the total market was split into several segments and subsegments.

1. Micromarkets are defined as the further segments and subsegments of the satellite data services market included in the report.
2. Core competencies of companies are captured in terms of their key developments and strategies adopted to sustain their position in the market.

Along with the market data, MarketsandMarkets offers customizations as per the specific needs of companies. The following customization options are available for the report:

I want to know about satellite services (navigation, positioning, and timing services) in Africa, Central Asia, and LATAM.