[144 Pages Report] The global automotive communication technology market is valued at USD 5.84 billion in 2017 and is projected to reach USD 19.99 billion by 2025, at a compound annual growth rate (CAGR) of 16.7% during the forecast period. In this study, 2017 has been considered as the base year, and 2018ñ2025 the forecast period, for estimating the size of the market.

The report analyzes and forecasts the market size, by value (USD million) and volume (million nodes), of the market. The report segments the market and forecasts its size by bus module, application, vehicle class, and region. The report also provides a detailed analysis of various forces acting on the market, including drivers, restraints, opportunities, and challenges. It strategically profiles key players and comprehensively analyzes their market shares and core competencies. It also tracks and analyzes competitive developments, such as joint ventures, mergers and acquisitions, new product launches, expansions, and other activities carried out by key industry participants.

The figure given below illustrates the break-up of the profile of industry experts who participated in primary discussions. 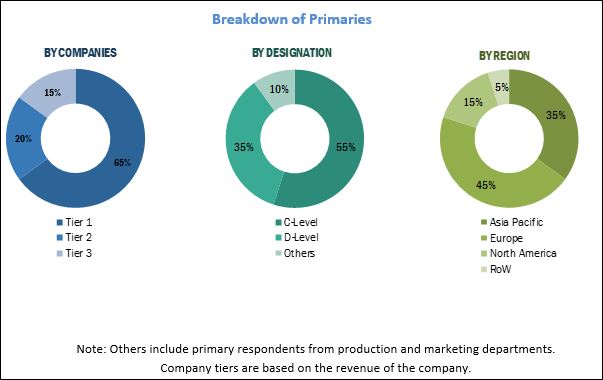 The ecosystem of the automotive communication technology market consists of manufacturers, such as Robert Bosch (Germany), Toshiba (Japan), Broadcom (US), Texas Instruments (US), and NXP (Netherlands), and research institutes such as AUTOSAR, OPEN, AEC, and DVSA.

MarketsandMarkets offers the following customizations for this market report:

With the rapid increase in the overall content of electronic and semiconductor components, the amount of data generation has been increased which requires a fast processing protocol. Hence, the new protocols have such introduced for specific applications. For instance, FlexRay is majorly used in safety applications, and on the other hand, MOST is developed specifically for infotainment systems and camera-based ADAS functions. But, the next challenge for OEMs after developing fast and robust protocols is the cost of implementation. As a result, automotive players are developing and implementing Ethernet for vehicles with flexible data transition rate. Ethernet is expected to gain the traction in future similarly as CAN has done that in the past. 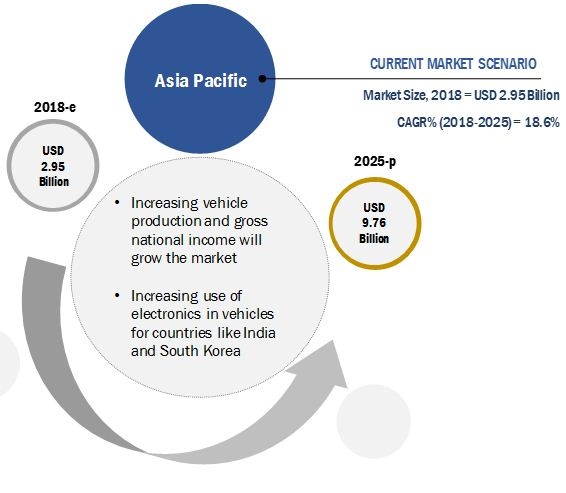 Critical Questions would be:

The global market is estimated to be USD 6.78 billion in 2018 and is projected to grow at a CAGR of 16.7% during the forecast period, to reach USD 19.99 billion by 2025. Some of the major growth drivers for the market are the growing number of electronic systems in passenger cars, government mandates, and industry norms to reduce emission and improve the safety of vehicles. The rise in sales of premium vehicles and the emergence of autonomous vehicles can create new revenue generation opportunities for automotive communication technology providers. However, increase in cybersecurity threats for connected vehicles can pose a challenge for automotive communication technology providers.

The global market is segmented by bus module, application, vehicle class, and region. The report discusses five automotive communication technology bus modules, namely, local interconnect network (LIN), controller area network (CAN), FlexRay, media oriented systems transport (MOST), and ethernet. CAN segment is estimated to account for the largest share of the market. This segment is driven by factors such as increasing electronic content for applications such as powertrain, body control & comfort, and infotainment & communication.

The extensive study has been done on four key regions, namely, Asia Pacific, Europe, North America, and the Rest of the World (RoW). 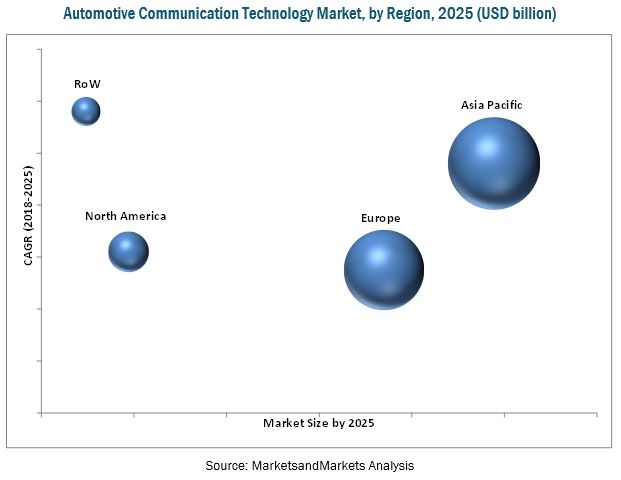 The Asia Pacific market is projected to hold the largest market share and is estimated to grow at a significant CAGR during the forecast period. The market growth in the region can be attributed to the increase in vehicle production and government mandates regarding the active and passive safety of vehicles. In addition, the increasing investment in infrastructure, construction activities, and increasing sales of luxury vehicles are also projected to drive the market growth in this region. Some of the major restraints for the global market are high complexity and less reliability of electronics architecture and higher cost per node with the increase in communication nodes in a vehicle.

Some of the major players in the global automotive communication technology market are Robert Bosch (Germany), Toshiba (Japan), Broadcom (US), Texas Instruments (US), and NXP (Netherlands). The last chapter of this report covers a comprehensive study of the key vendors operating in the market. The evaluation of market players is done by taking several factors into account, such as new product development, R&D expenditure, business strategies, product revenue, and organic and inorganic growth.

LIN is a Universal Asynchronous Receiver-Transmitter (UART) networking architecture based on a single-master, multiple-slave, flip-flop switch. It was developed for automotive sensor and actuator networking applications. LIN is a more cost-effective networking option than CAN for connecting motors, switches, sensors, and lamps in a vehicle.

CAN provides a low-cost and durable network that helps multiple CAN devices communicate with one another; an advantage of this is, Electronic Control Units (ECUs) can have a single CAN interface rather than several analog and digital inputs to every device in the system. CAN is estimated to get the largest revenue share globally during the forecast period owing to its unique advantages such as flexible data rate and low cost of integration.

The FlexRay automotive communications system is a bus protocol with a dual channel data rate of 10 Mbps for advanced in-vehicle control applications. The protocol operates in an algorithm of deterministic communications and is designed to be faster and more reliable than the CAN protocol, but is also more expensive. The FlexRay Consortium had designed this protocol, and although the consortium was dissolved, the FlexRay standard is now part of ISO standards. FlexRay is estimated to be the largest market size in Europe due to implementation of safety and ADAS features in the vehicle.

The Media-Oriented Systems Transport (MOST) is a high-speed multimedia network technology used in vehicle networking. It operates as a synchronous data communication, which features ring topology, and is used for the transmission of voice, video, and data signals, through both electrical and optical fiber physical layers. The MOST protocol is estimated to get the slow growth rate because of its high cost and emergence of other protocols like ethernet.

The Ethernet protocol in automotive provides Ethernet and IP-based routings in vehicles. Ethernet-based technologies find importance and varied usage in different applications of vehicle, as automotive Ethernet incorporates powerful data transmission, is less expensive, and has more flexibility than comparable network technologies. The Ethernet technology clears the path for the next level of connectivity. It not only provides improved bandwidth for advanced automotive applications such as ADAS application but also lowers latencies for control applications. The ethernet market is at the emerging stage and estimated to be the fastest growing among all protocols. Europe is estimated to record largest revenue share of ethernet with significant CAGR.

Critical Questions would be:

*Details on Business Overview, Products Offered, Recent Developments & SWOT Analysis Might Not Be Captured in Case of Unlisted Companies.