[480 Pages Report] The base oil market size is projected to grow from USD 33.7 billion in 2019 to USD 39.6 billion by 2024, at a CAGR of 3.3% from 2019 to 2024. Surging demand for high-grade oils in the automotive industry and increasing GDP in Asia Pacific led by the increasing industrial activities are fueling the growth of the market across the globe. Lucrative market opportunities from BRIC nations (Brazil, Russia, India, and China) and rising demand for renewable energy are expected to boost the market’s growth. 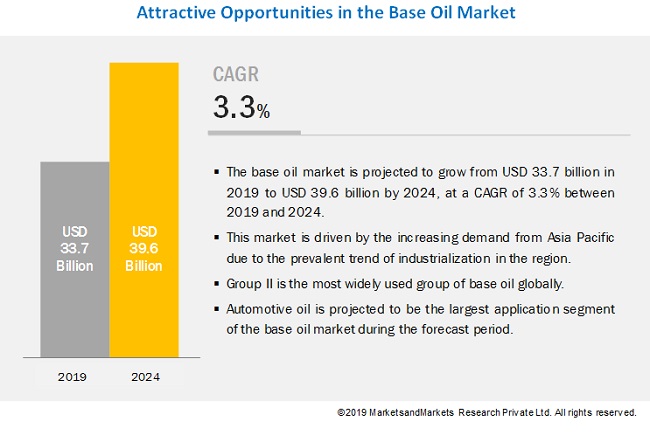 Based on group, the Group II segment accounted for the largest base oil market share in 2018. This segment is projected to lead the market in terms of both value and volume during the forecast period. Group II base oil can be employed in a multitude of applications, such as marine and gas engines, in trunk piston engine oils, and other applications in the base oil industry. The high consumption of Group II base oil is mainly attributed to its higher performance and affordability in comparison to the other groups of base oil.

Based on application, the base oil industry has been segmented into automotive oil, industrial oil, hydraulic oil, grease, metalworking fluid, and others. The other applications include agriculture, additives, and detergents/dispersants. The automotive oil application segment is projected to lead the market during the forecast period in terms of both value and volume. The growth of this segment can be attributed to the growth of the automotive sector in developing countries, such as India and China. In Asia Pacific, the population growth is increasing the demand for automobiles, thus propelling the market for base oil in the automotive oil application segment. 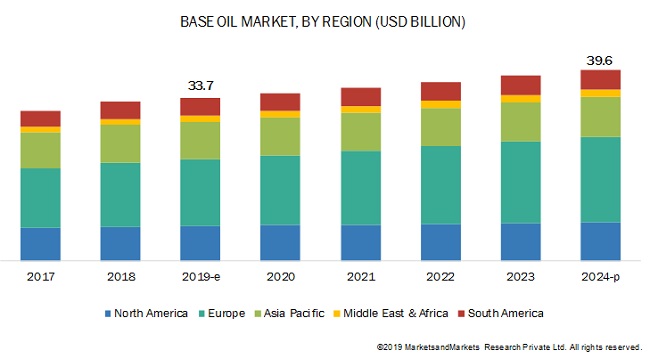 This research report categorizes the base oil market based on group, application, type (qualitative), and region.

Based on Type (qualitative)

What are the various groups of base oil?

According to the American Petroleum Institute (API), base oil has been characterized into five groups; Group I, Group II, Group III, Group IV, and Group V.

What are the basic difference between Group I, II,III, IV and V base oils?

The American Petroleum Institute (API) categorizes base oil into Group I, Group II, Group III, Group IV, and Group V. These base oil group division is based upon the chemical compositions and other physical properties, such as sulfur level, viscosity index, and saturates level. The first three groups (Group I, II, and III) are obtained from the refining of petroleum crude oil, whereas, Group IV is a fully synthetic (poly-alpha-olefin) oil. Group V comprises all base oils not included in Groups I, II, III, or IV. Naphthenic base oils, various synthetic esters, polyalkylene glycols (PAGs), phosphate esters, and others fall into Group V.

Which group of base oil, leading the global market and why?

Group II base oil dominated the global market in 2018. It contains more than 90 percent saturates and less than 0.03 percent sulfur and is available in the viscosity index ranging from 80 to 120. This group of base oil is mostly produced by the hydrocracking process. The increasing demand for clear and high-efficiency lubricants is driving the demand for Group II base oil in the western markets, whereas demand from industrial lubricants is considered as a key factor contributing to the growth of the Group II base oil market in Asian countries.

What is the major factor, for the global base oil market growth?

Rapidly growing demand for the high-grade lubricating oil in the automotive industry is considered as one of the major factors, driving the growth of the base oil market around the world. Advanced engine technology at present, is propelling the demand for high-grade lubricants to provide compatibility to fast-moving parts and high temperatures. The selection of base oil has a huge impact on the overall performance of the finished lubricants. Engine oils are composed of 70–90 percent base oil and 10–30 percent additives. Thus, the growing demand for high-grade engine oils is expected to fuel the market for base oil as well.

What is biggest restraint for the base oil market?

Declining demand for the Group I base oil is considered as a major challenge for the overall base oil market growth. Since the early 20th century, base oil production has been dominated by Group I. However, at present, the Group I base oil is expected to record a significant drop in demand, especially in the European and North American regions. Group I base oil has a high content of impurities, such as sulfur, nitrogen, olefins, and PCNA (Poly-Cyclic Nuclear Aromatics). The high sulfur content of Group I base oil makes it difficult to meet the mid SAPS (Sulfated Ash, Phosphorous, and Sulfur) specifications or match the high performance of lighter viscosity grade oils.

What are the key applications of the base oil?

Which type of base oil is most suitable for industrial oil?

Naphthenic base oils are generally used to prepare industrial oils, which include turbine oil, transformer oil, refrigeration oil, oil for textile lubrication, and cutting fluid. The growth of the industrial oil segment is majorly driven by the increased consumption in Asia Pacific, due to rapid industrialization in the region.

Who are the major players, operating in the global base oil market?

*Note: Further Breakdown of Middle East and Rest of Asia-Pacific Countries Can Be Provided, as Per the List of Countries the Client Asks For.

As a part of the secondary research process, various secondary sources such as Hoovers, Bloomberg, BusinessWeek, and Dun & Bradstreet have been referred to, for identifying and collecting information for this study. These secondary sources included annual reports, press releases & investor presentations of companies, white papers, certified publications, and articles by recognized authors, authenticated directories, and databases.

Secondary research was mainly conducted to obtain key information about the supply chain of the industry, a monetary chain of the market, the total pool of players, and market classification and segmentation according to industry trends to the bottom-most level, regional markets, and key developments undertaken from both the market and technology oriented perspectives.

The base oil market comprises several stakeholders, such as raw material suppliers, processors, end-product manufacturers, and regulatory organizations in the supply chain.
As a part of the primary research process, various primary sources from both the supply and demand sides were interviewed to obtain qualitative and quantitative information for this report on the base oil market. Primary sources from the supply side included industry experts such as chief executive officers (CEOs), vice presidents, marketing directors, technology and innovation directors, and related key executives from various key companies and organizations operating in the base oil market. Primary sources from the demand side included directors, marketing heads, and purchase managers from various end-use industries. Following is the breakdown of the primary respondents.

After arriving at the overall base oil market size—using the market size estimation processes as explained above—the market was split into several segments and subsegments. To complete the overall market engineering process and arrive at the exact statistics of each market segment and subsegment, the data triangulation and market breakdown procedures were employed, wherever applicable. The data was triangulated by studying various factors and trends from both the demand and supply sides. In addition to this, the market size was validated using both top-down and bottom-up approaches.

With the given market data, MarketsandMarkets offers customizations according to a company’s specific needs.

Growth opportunities and latent adjacency in Base Oil Market