Fiber to the x Market

[127 Pages Report] The overall FTTx market was valued at USD 9.29 billion in 2017 and is expected to reach USD 14.31 billion by 2023, at a CAGR of 8.10% during the forecast period. The base year considered for the study is 2017, and the forecast period considered is 2018ñ2023. The objective of the report is to provide a detailed analysis of the FTTx market based on architecture, distribution network, product, vertical, and geography. The report forecasts the market, in terms of value, for various segments with regard to 4 main regions North America, Europe, APAC, and RoW. It strategically profiles the key players and comprehensively analyzes their core competencies in the FTTx market, and details the competitive landscape for market leaders.

The research methodology used to estimate and forecast the FTTx market begins with capturing data on key vendor revenues through secondary research. Secondary sources used for this research study include government sources; associations (Fiber Broadband Association, FTTH Council Europe, FTTH Council Africa, and The Fiber Optic Association); journals and magazines (Broadband Communities Magazine, International Fiber Journal, and Journal of Optical and Fiber Communication Research); and corporate filings (such as annual reports, investor presentations, and financial statements). The bottom-up procedure has been employed to arrive at the overall size of the FTTx market from the revenue of key players in the market. After arriving at the overall market size, the total market has been split into several segments and subsegments, which have been verified through primary research by conducting extensive interviews with experts such as CEOs, VPs, directors, and executives. The data triangulation and market breakdown procedures have been employed to complete the overall market engineering process and arrive at the exact statistics for all segments and subsegments. The breakdown of the profiles of primary respondents has been depicted in the below figure. 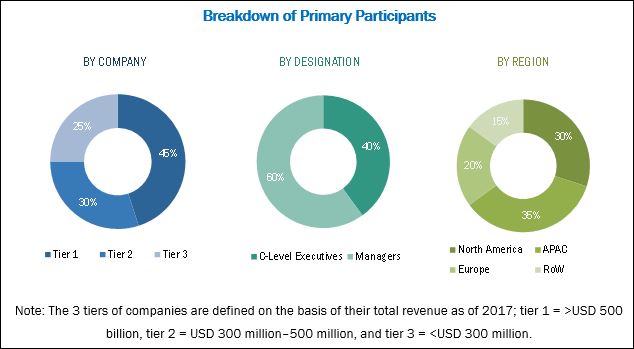 ìThis study answers several questions for stakeholders, primarily which market segments to focus on in the next 2ñ5 years for prioritizing efforts and investments.î

This report categorizes the FTTx market based on architecture, distribution network, product, vertical, and geography.

With the given market data, MarketsandMarkets offers customizations according to the companyís specific needs. The following customization options are available for the report:

The FTTx market is estimated to grow from USD 9.70 billion in 2018 to USD 14.31 billion by 2023, at a CAGR of 8.10% from 2018 to 2023. The growth of this market can be attributed to the increasing penetration of FTTx network architectures in commercial, industrial, and residential verticals.

This report segments the FTTx market by architecture, distribution network, product, vertical, and geography. By architecture, the FTTx market has been segmented into FTTh/p/b, FTTn/c, and FTTa. The market for FTTn/FTTa is expected to grow at the highest CAGR during 2018ñ2023 owing to the growing use of optical fiber in mobile backhaul for communication and rising implementation of FTTx architectures in telecommunication networks.

The FTTx market in APAC is expected to grow at the highest CAGR during the forecast period. Increasing demand for broadband, especially in APAC countries such as China and India, which account for about one-third of the worldís population, is likely to drive the FTTx market in APAC during 2018ñ2023. In APAC, the residential vertical is expected to witness strong demand for FTTx owing to the increasing requirement of fiber networks to overcome shortcomings such as narrow bandwidth, data overwhelming, interference, and higher maintenance and operating costs of copper networks. The major factor affecting/hindering the growth of the FTTx market is high installation cost.

The existing internet subscribers commonly use internet for surfing web pages, downloading songs and movies, and exchanging data over the internet. These applications do not need higher internet bandwidth; hence, the required bandwidth can be obtained through traditional copper cable networks. However, applications such as feature-length movies, software as a service (SaaS), IoT, and smart TV/internet TV require higher bandwidth, for which fiber cable networks are used.

Internet video communication is growing at a rapid pace, especially after the inception of Long Term Evolution (LTE). Presently, video communication accounts for nearly one-third of the internet traffic. This growth is due to the increasing demand for applications such as video sharing over the internet, instant messaging, video calling, and video on demand (VoD). All these forms of internet video communication are accelerating the demand for higher bandwidth. Also, the increasing penetration of applications such as video and web conferencing, AirPrint and AirPlay, and virtual cloud storage apps such as Dropbox, iCloud, and Google Drive is driving the need for higher bandwidth internet connectivity.

Growing use of optical fiber in mobile backhaul for communication

Mobile data consumption is rapidly increasing day by day due to the growing use of smartphones and tablets. Continuous increase in data consumption is creating heavy data backhaul in mobile communication. The existing network infrastructure usually faces problems in efficiently handling the huge volume of data at the backhaul.

Fiber network is capable of carrying data over long distances with minimal loss. According to the FTTH Council Europe, using fiber for mobile backhaul is becoming the norm in advanced mobile networks. Presently, operators tend to choose gigabit passive optical network (GPON) with various configurations, such as FTTp and FTTh, for handling higher bandwidth requirements. Key operators such as AT&T, Verizon, Cox, and TeliaSonera are currently deploying FTTx networks for their LTE network backhaul. Also, many service providers are shifting toward fiber-fed networks for mobile backhaul.

The number of mobile subscribers is increasing owing to the various services, such as mobile TV and video on demand, provided by service providers. As the number of subscribers is increasing, the existing copper cable network is getting overloaded, affecting network performance with respect to speed, efficiency, and reliability. The common problems arising due to the increased usage of data over the same network are data lagging, video buffering, data dropping, and data congestion. FTTx architecture can overcome these shortcomings of the copper cable.

Video is transforming the way we understand/interpret content; businesses and individuals are more interested in receiving content in the form of video. This is encouraging service providers to convert the content into video format to engage and attract customers. This, combined with the rise of IPTV, video calling, e-learning, and many more video-focused applications, is pushing telecom service providers to transform their networks.

Growth opportunities and latent adjacency in Fiber to the x Market

We are producing the InP single crystals. So, I am interested in the future volume on the related myriad types of materials for optical fibers.

I am studying the potential of Optical Fiber Cable & Optical Distribution Network in India and around the world for my research paper. Please help me with some data pointers regarding the overall market.