[171 Pages Report] The food thickeners market, by value, is projected to reach 15.80 Billion by 2022, at a CAGR of 5.95% from 2016 to 2022. Growth in demand for convenience foods, consumer awareness toward healthy diet, and multiple functionalities and advantages associated with the use of food thickeners are the factors driving global market.

The objectives of the report

This research report categorizes the food thickeners market based on type, source, application, and region.

Based on Type, the market has been segmented as follows:

Based on Source, the market has been segmented as follows:

Based on Application, the market has been segmented as follows:

Based on Region, the market has been segmented as follows:

With the given market data, MarketsandMarkets offers customizations according to client-specific scientific needs.

Food thickeners are food additives that increase the viscosity of a substance or a mixture while keeping its other properties unchanged. The most widely used food thickeners in the market are starches, followed by hydrocolloids, and proteins. Food thickeners are used in food applications such as bakery products, confectionery products, sauces, dressings, marinades & gravies, beverages, dairy & frozen desserts, and convenience & processed food.

The growth of the market is driven by multifunctionality, compatibility with other ingredients, low cost, and abundant supply of food thickeners. The other key drivers for the market growth are rising demand for convenience & processed foods, and an increase in awareness toward a healthy diet.

High R&D costs associated with the development & manufacturing of food thickeners and fluctuations in raw material prices of hydrocolloids are the major restraints for the market.

Each food thickener works differently, depending upon the application. Hence, food thickener manufacturing companies should have a strong and dedicated R&D facility to develop food thickeners that are innovative and suitable to demanding product formulations. High R&D costs associated with the extraction and manufacture of vegetable gum and starch derivatives are restraining this market’s small and medium manufacturers. The extraction of thickening agent derivatives from new natural sources for physical and chemical applications in food & beverages has become a challenge for manufacturers. Several specific and technological factors such as crushing, sifting, centrifuging, and hydrolysis, need consideration and add to the manufacturing cost.

The price of hydrocolloid raw materials affects the price of food thickeners, which, in turn, impacts the price of the end food products. Hydrocolloids are mainly obtained from natural sources. Many thickening agent manufacturers increased the price of hydrocolloids in the last five to six years. For instance, in October 2011, Danisco announced that the global hydrocolloid price increased by 5% to 15% due to rise in raw material, energy, and logistic costs. The price of guar gum is fluctuating due to the poor harvesting of crops in Asian countries such as India and Pakistan. Consequently, many end-user companies have shifted to xanthan, an alternative of guar gum. Also, xanthan gum manufactured in China is facing anti-dumping tax, owing to their import and sales in the US market at a fairly low price. Thus, to protect the domestic manufacturing units (of xanthan gum), anti-dumping tax was imposed by the International Trade Administration, and the US Department of Commerce on xanthan gum imported from the People's Republic of China (PRC) for the period of July 19, 2013 through June 30, 2014. Thus, given the tremendous increase in the raw material prices, manufacturers are bound to increase the prices of hydrocolloids. 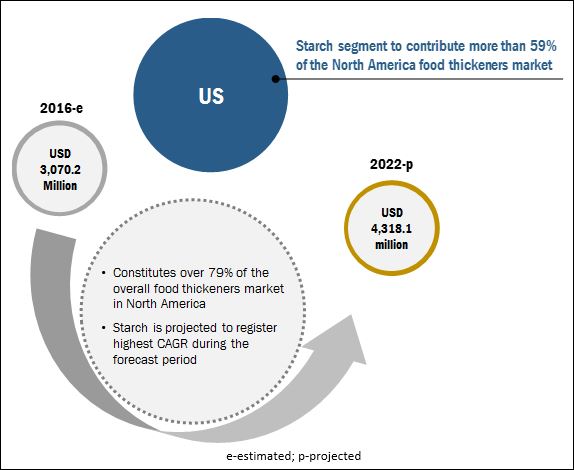 New and advanced innovations in thickening agents add more revenue to the global food thickeners market. For instance, in June 2015, scientists at Oregon State University discovered and commercialized a new type of dairy thickener, namely, Ropy 352. Ropy 352 may add probiotic characteristics to some of the products in which it is used. As per Oregon State University, it is estimated that the US spends up to USD 120 billion a year on probiotic products such as yogurt, sour cream, and buttermilk. There are many potential natural thickeners that are under examination or in the process of approval. For instance, cress seed gum is one of the potential food thickeners. 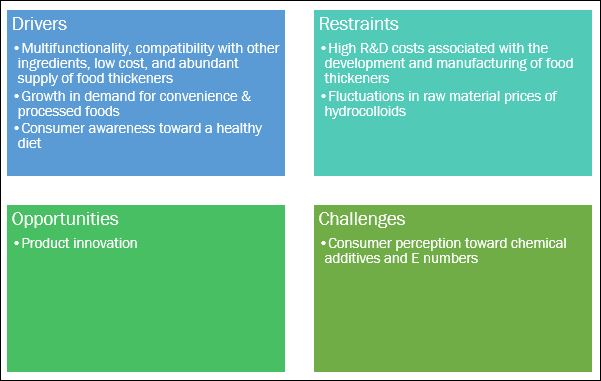 Food thickeners are used in a variety of bakery products, a few of which include cakes, brownies, cookies, breads, and pizzas. Hydrocolloid-based food thickeners are generally used in bakery food applications followed by flour-based food thickeners. Hydrocolloids such as agars, guar gums, alginates, gellan gum, and gelatin are some of the most preferred thickening agents by bakery product manufacturers. Agars are partly sulfated polysaccharides that dissolve in water through gelation process and are used to make custard desserts, pies, tarts, and cookies. Further, guar gums and alginates are used in bakery applications such as bakery fillings, pies, cakes, and tarts. 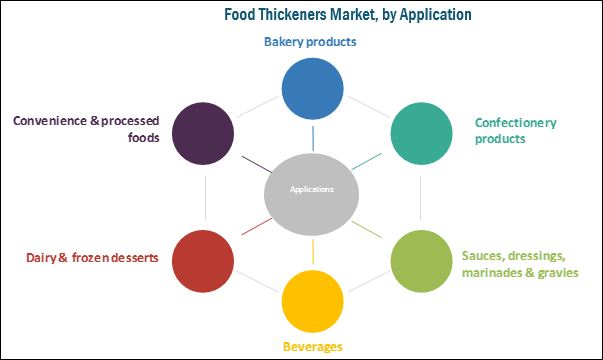 Hydrocolloids are usually used in confectionery products which mainly include jam, jelly, marmalade, chewing gum, and low sugar/calorie gels. Pectin is widely used as a food thickener in marmalades, jams, and jellies. Technologies such as anhydrous gum formulation are used to make chewing gums and to enhance the shelf life of the product. Ingredients such as clean label gelatin and clean label native starch are increasingly finding their usage in confectionery products as thickening agents. Though the market for these clean label ingredients is currently estimated to be very niche, increasing health awareness among consumers has resulted in significant demand and is an evolving trend in some of the developed countries such as the US, the UK, Germany, and France.

Hydrocolloids are widely used as thickening agents in sauces, dressings, marinades & gravies. Alginates, locust bean gum, and starches are often used as replacements of synthetic wax such as sorbitan monostearate and polyoxyethylene. Alginates, locust bean gum, and xanthan gum function as thickeners in dressings, whereas starch performs best in sauces. Other thickeners such as gum arabic are also used as per availability of thickeners in sauces & dressing. Multifunctional flours are used as thickening agents for industrial sauce applications.

Hydrocolloids such as xanthan gum, pectin, alginate, and CMC are widely used as food thickeners in various beverage applications. Apart from these, other thickeners such as gum arabic and arabino-galactan (bio-polymer) are also used by some beverage manufacturers. The mechanisms involved in the thickening process for beverages are suspension, cling, mouthfeel, pouring, pumping, and spraying. Around the world, food thickeners are generally used in fruit-based beverages. Artificial thickeners for fruit-based beverages are used minimally in developed countries; use of such artificial thickeners is a common practice in developing countries such as China, India, and other Southeast Asian countries.

Among hydrocolloids, guar gums from guar beans and carrageenans from red seaweed are widely used as food thickeners for dairy products. Carrageenans are used in ice creams and milk shakes, whereas guar gums are used in manufacturing yogurt and other milk products. Apart from these, agar, locust bean gum, and gellan gum are also used as thickening agents for beverages. Starches such as corn starch are highly preferred for thickening dairy-based sauces. Proteins such as sucrose esters of fatty acids are also used as food thickeners in dairy applications.

Convenience and processed food includes processed meat products, prepared meals, ready-to-eat products, ready-to-cook products, snacks, fruit preparations, and baby food. Food thickeners such as hydrocolloids are widely used in convenience foods to make the products more appealing and attractive. Agar, alginate, carrageenan, and guar gums are widely used as food thickeners in ready-to-eat and ready-to-cook food due to their multiple functionalities other than thickening, such as gelling, emulsifying, stabilization, and coating. Pectin is widely used in canned fruits, whereas starch finds usage in canned products. Starches are also used in convenience foods for their multiple benefits such as process stability, enhanced mouthfeel & appearance, and shelf life extension.

The food thickeners market is driven by the growth in demand for convenience foods, consumer awareness toward healthy diet, and multiple functionalities and advantages associated with the use of food thickeners.

The global market, based on type, has been segmented into hydrocolloids, proteins, and starch. The market for starch dominated this market in 2015 and is also projected to be fastest-growing segment during the forecast period. The large consumption of starch as food thickeners is due to their easy availability and abundant supply across regions, and relatively lower price in comparison to other food thickeners, and optimum functionality. Furthermore, they do not to have any negative impact on the organoleptic properties of food products due to which they are preferred over other food thickeners.

The global food thickeners market, based on source, has been segmented into plant, animal, and microbial. The plant sourced food thickeners dominated the market in 2015, and is also the fastest-growing market during the forecast period. The dominance of this source of food thickeners is due to their cost effectiveness, abundant supply & ready availability with large number of suppliers, equal nutritional value at par with other sources, and greater acceptability by both vegan and non-vegan populations.

Food thickeners, by application, has been segmented into bakery, confectionery, sauces, dressings, marinades & gravies, beverages, dairy & frozen desserts, and convenience & processed foods. The dairy & frozen desserts application segment dominated the food thickeners market in 2015. This is due to the wide usage of food thickeners such as hydrocolloids, starch, and proteins, not only for thickening but also for other functional purposes such as flavor and texture enhancement in products. The beverages segment is projected to be the fastest-growing during the forecast period. A number of innovations in the beverage sector, coupled with additional properties of food thickeners such as fat replacement, water binding, emulsifying, and texturizing, are driving their use in the various beverage applications. 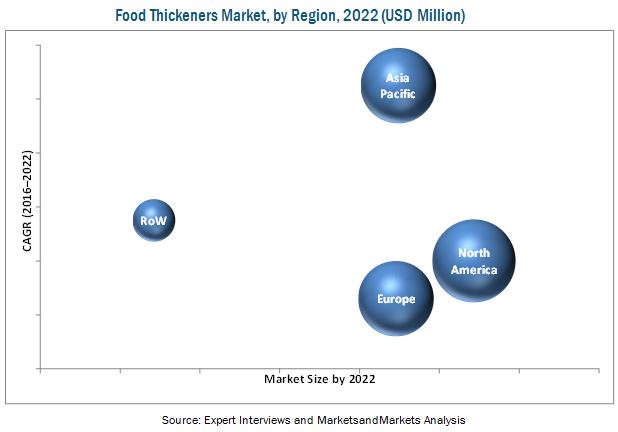 North America accounted for the largest market share in the food thickeners market. The dominant share of the North American region is attributed to its high consumption of hydrocolloids, proteins, and starch & starch derivatives in a diverse range of food & beverage applications. Asia-Pacific is projected to be the fastest-growing region. This is attributed to the growing volume consumption of various types of food thickeners in Asia-Pacific, as food & beverage manufacturers focus on product innovation, health aspects, and improving the functional characteristics such as texture, flavor, and other organoleptic properties of their products.

High R&D costs associated with the development and manufacturing of food thickeners and fluctuations in raw material prices of hydrocolloids are the major restraints for the market.

Food Thickeners Market
Published Date: Feb 2017 | Report Code: FB 5004
Inquiry Before Buying Request Sample
REQUEST FORM
By clicking the "Submit" button, you are agreeing to the Terms of Use and Privacy Policy.