The major part of the network camera market segmentation revolves around five parameters; technology, product types, resolution, verticals, and geography. The technology market is segmented according to the method of operation, connectivity, type of image sensor, and image compression kit being used. The product market is segmented according to the physical characteristics such as fixed, PTZ, dome, and others.

Segmentation by resolution, as the term suggests, throws light on the network camera market based on different types of resolution the product offers. This segment covers four commonly used resolutions, i.e. analog, megapixel, wide dynamic range, and others. The vertical market is segmented into four major verticals; namely institutional, government, commercial, and others. The global market is also mapped against geography. The market by geography is further segmented into North America, Europe, APAC, and ROW.

The major part of the video analytics market segmentation revolves around five parameters; applications, functions, system architecture, verticals, and geography. The distinctiveness of video analytics, such as a proactive tool video that raises alarm in real time and presents alerts about whatever the application is programmed to identify; has resulted in its inclusion in various applications. This segmentation has been broadly classified as security, entertainment, and visual communication. The function market for video analytics market is calculated by segmenting it according to various types of functions. The market is segmented according to the functionality of video analytics like real time video, forensic or video indexing, and business intelligence.

There are two broad categories of systems for implementing video analytics - centralized or server-based analytics and distributed or edge-based analytics. The report segments the market in the similar manner. The segmentation according to verticals is based on the similarity in implementation of video analytics in different verticals. The segmentation includes institutional, government commercial, and other verticals. The global video analytics market has been segmented into four major regions; namely Americas, Europe, Asia-Pacific (APAC), and Rest of the world (ROW). The market is divided into the above-mentioned regions to depict the economic characteristics and trends pertaining to them.

The global video analytics market is estimated to worth more than $1,200 million in 2017 growing at a CAGR of around 38% from 2012 to 2017.
Apart from the global network camera market and video analytics market segmentation, the report includes critical market data showing the Porter’s five force analysis, industry life cycle analysis, revenue model analysis, and value chain analysis with detailed process flow diagram, and market dynamics such as; drivers, restraints, and opportunities.


The report segments the global network camera market and video analytics market on the basis of hardware and software attributes of the networked or digital video surveillance system. Owing to different parameters and distinguished market dynamics, the market around the parameters such as functionality, products, applications, verticals, resolution, architecture, technology, and geography.

The global network camera market is segmented into:

The global video analytics market is segmented into:

Each section will provide market data, market drivers, trends and opportunities, key players, and competitive outlook. This report also makes ways for market tables to cover the sub-segments and micro-markets. In addition, it profiles 30 companies covering all the sub-segments such as “overview”, “products & services”, “financials”, “strategy”, and “developments”.

Network cameras are undergoing a paradigm shift in terms of increasing processing power and offering more functionality to Video Management Service (VMS) vendors and users. In addition to higher picture quality, higher resolution, and higher frame rates, network cameras are now embedding new functionality like on cam storage & video analytics that stores the relevant information or processes information or metadata and sends it across the network.

As of 2012, network cameras have overcome almost all the drawbacks of analog camera technology like interlacing, low reliability, low resolution, absence of embedded intelligence (video analytics), and less cost-effectiveness. Marked by its peak in growth stage, the market is expected to grow at an impressive rate of around 20% year-on-year and by the end of 2014, it is expected to replace the analog cameras in video surveillance systems. The network camera value chain, at present, is dominated by ample number of players. Established core security business firms, mainly large and medium players from video surveillance value chain, are trying to enter this market, thereby focusing on IT and networking.

The characteristics of network cameras such as network identity, ability to transfer data at higher bit rate, higher resolution, on cam analysis, and storage have resulted in their inclusion in various verticals. For certain verticals such as government and institutional; network cameras are dominating the video surveillance market. Besides, network cameras have also developed new market segments like commercial segment that includes sectors like retail, healthcare, and manufacturing plants for pervasive surveillance. This global market is evenly distributed across various geographies. 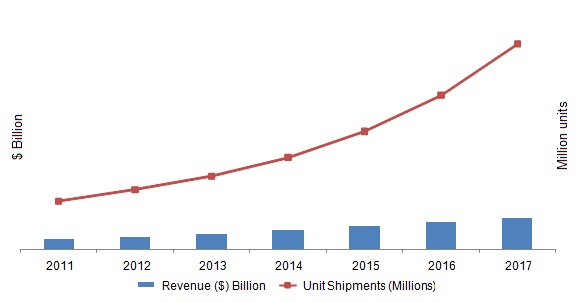 Video analytics software is becoming a key element in today’s growing video surveillance system applications, given that human video monitoring is getting difficult with the increasing number of video channels and incremental cost additions. This has led to the innovation of digital products and systems centered on intelligent video analytics and sensors, which has, in turn, resulted in the best possible coordination of system functionality with operator requirements. Video analytics can be defined as turning raw video data into useful information and organizing that information in a way that makes it accessible and valuable to business.

More powerful digital signal processors (DSPs) are enabling cameras to execute considerably more demanding software algorithms and identify specific objects or actions. Server-based video analytics software products using highly specialized algorithms to analyze IP streaming signals are allowing image processing on the fly. Artificial intelligence is even enabling video analytics software to learn on the job. In response to these developments, false alarm rates are dramatically dropping and the ability to make fine distinctions in what is being seen is rapidly improving.

As of 2011, the security & surveillance application of video analytics was prominent while visual communication and entertainment applications were catching up with the market needs. Although there are various video analytics functions, they can be categorized into real time monitoring, video indexing or forensics, and business intelligence. The present focus of these functions is largely on detecting alarm events and abnormal behaviors with regards to public safety and security. Video indexing or forensic function is the process of defining set criteria and allotting them indices, which can be viewed and analyzed later.

As powerful processors at affordable price points become available, the ability to effectively meet market demands for video analytics is within reach. The ability to meet such requirements across industries will become a greater focus for VMS vendors as well as network camera suppliers. 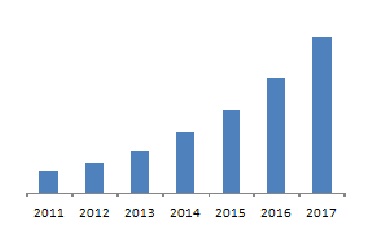 I only want to download the report listed in the sample needed, but not getting proper option. Is these a single report purchase price?

Hello, I am doing research in embedded computer vision field. I would highly appreciate if you could provide me the video analytics part of the report.