[147 Pages Report] The white box server market was valued at USD 4.59 billion in 2015 and is expected to reach USD 14.43 billion by 2022, growing at a CAGR of 18.6% between 2016 and 2022. A white box server is a data center computer which is not manufactured by a well-known vendor. It can be found in large data centers run by giant Internet companies such as Google (U.S.) and Facebook Inc. (U.S.). White box servers are usually purchased in bulk quantities from original design manufacturers (ODMs). ODMs generally build their servers with commercial off-the-shelf (COTS) components that can be assembled in different ways or upgraded to provide the customer with a degree of system customization. The base year considered for study is 2015, and the forecast period is between 2016 and 2022.

White box servers cost less than the branded servers due to their usage of generally available components and absence of premium branding. The lower cost aids organizations use white box server systems to leverage equal or more computing power at a lower price than branded systems. Large-scale data centers, which are operated by large cloud service providers, benefit enormously from lower cost white box servers since they can purchase servers in bulks quantities. Servers from ODMs are being favored by hyperscale data center customers since they provide high degree of customization, along with the benefit of low cost. As white box servers are often assembled when ordered, each server can be put together from a large range of components from which a customer selects. A white box server offers a great amount of flexibility for configuration to meet the requirements of applications assembled to run the system. In contrast, big-name branded servers are available with only fixed or limited configurations 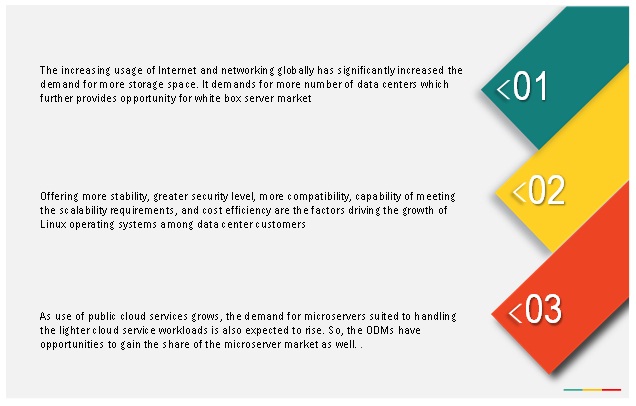 This report provides a detailed analysis of the white box server market based on form factor, business type, processor, operating system, and geography. Report forecasts the market size, in terms of value, and main regions: the Americas, Europe, the Middle East & Africa (EMEA), and Asia-Pacific (APAC). It strategically profiles the key players and comprehensively analyzes their market rankings and core competencies, along with the detailed competitive landscape for the market leaders.

The research methodology used to estimate and forecast the white box server market begins with capturing data on key vendor revenue through secondary research sources such as secondary literature, MTG Blog, factiva, and so on. The vendor offerings are also taken into consideration to determine the market segmentation. Top down and bottom-up procedures have been employed to arrive at the overall size of the global white box server market from the revenue of key players. After arriving at the overall market size, the total market has been split into several segments and subsegments which have been verified through the primary research by conducting extensive interviews of people holding key positions such as CEOs, VPs, directors, and executives. The market breakdown and data triangulation procedures have been employed to complete the overall market engineering process and arrive at the exact statistics for all segments and subsegments. The breakdown of the profiles of primaries is depicted in the below figure:

“This study answers several questions for the stakeholders, primarily which market segments to focus on in the next two to five years for prioritizing efforts and investments.”

With the given market data, MarketsandMarkets offers customizations according to the companies’ specific needs. The following customization options are available for the report:

White box servers are the servers which are directly sold by ODMs or EMS providers rather than OEMs. White box servers are usually purchased in bulk quantities from suppliers called as original design manufacturers (ODMs). ODMs usually build their servers with commercial off-the-shelf (COTS) components that can be assembled in slightly different ways or upgraded to deliver the customer with a degree of system customization.

Tower servers look most likely PCs. Each tower server is a standalone machine that is built into an upright case. In this type of tower servers, the data is stored in a single tower rather than being spread across various machines. It is relatively compact. One advantage of the tower server includes easier cooling because the overall component density is fairly low.  Tower servers are used mostly in smaller data centers. Its simplicity and robustness also mean that the tower server is considered to be an ideal for small companies. It does not require robust maintenance.

Rack servers are servers that are mounted in a rack. The rack is of a uniform width and servers are mounted to the rack using screws. Each rack can accommodate multiple servers, and the servers are typically stacked on top of each other which makes cooling more difficult, while scaling is much easier. A rack server is designed to be positioned in a bay, which assists one to stack various devices on top of each other in a large tower. The bay would accommodate all of the hardware devices the company needs to function, including the server, storage devices, and security and network appliances.

A blade server is basically a stripped-down version of a standard rack-mounted server unit that contains just the bare essentials: a CPU, RAM, integrated I/O ports, and network adapters. Other components, such as power converters, cooling equipment, and storage are provided by the blade server chassis, which itself fits into a standard rack enclosure. This makes blade servers even thinner and also more expensive.

Modular and dense server form factors were originally introduced to address the data center floor space and power/cooling costs of hyperscale data centers. Density-optimized servers are addressing an increasing number of web and HPC workloads for customers that require a balance of OPEX (power, space) with overall system throughput.

Rack & tower servers are expected to grow at the fastest rate during the forecast period due to the increasing adoption of rack servers in both data centers and enterprise customers while tower servers in enterprise customers. The market for non-X86 servers expected to grow at the fastest rate during forecast period due to more power-efficient feature; ARM processors are being preferred by data center operators and an ARM server is getting much support in the server market. The market for Linux servers expected to grow at a significant rate in coming years. More stability, scalability, cost efficiency offer greater adoption of Linux servers among end users. 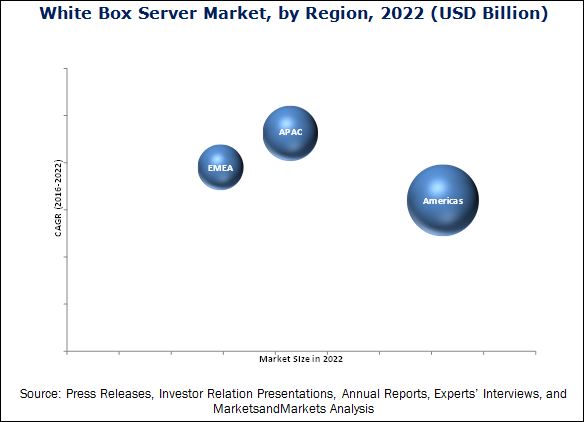 APAC is expected to be the fastest-growing market for the white box servers during the forecast period due to the increasing presence of cloud service providers in APAC. There are number of reasons behind the growth of Asia-Pacific data center industry such as increasing number of internet users, increasing need for an infrastructure refresh in older data centers, growing role of data sovereignty as data privacy laws mature in Southeast Asia. Hong Kong and Singapore, being strategic locations for the white box server market, presence of giant players such as Alibaba Group Holding Ltd. (China), Tecent Holdings Ltd. (China), Baidu Inc. (China) which play an important role in the white box server market. Also, players such as Facebook Inc. (U.S), Microsoft Corp. (U.S.), Amazon Web Services Inc. (U.S.), and Google Inc. (U.S.), among many others are increasing their presence in the APAC market. Moreover, many cloud service providers inclined toward the adoption of white box servers over branded servers. Large enterprises in APAC also expected to adopt white box servers in the coming years.

*Details on Overview, Products and Services, Financials, Strategy & Development Might Not Be Captured in Case of Unlisted Companies.

I would like to obtain an in depth understanding and knowledge about the white box server market, with emphasis on the APAC market.

I would like to learn more about white box server; the market size, solutions provided by the players in the market and current news about this technology.

We would like to get details on white box server market penetration in North America, Europe, and Asia-Pacific and relative rankings amongst top white box server providers in the respective regions.

Hi...Wondering if I could buy a specific report instead of a general license. I'm specifically interested in the White box Server report as well as the Aftermarket report. What would the price be for each report?

We want to see the Market for ODMs more clearly. Are the white box servers sold to the customer directly or are there any third party vendors involved? Any information on various types of server along with its form factor would be added advantage. P.S. If we make a long-term contract, can you update periodically? (Monthly / Quarterly).