The key applications considered for the market study are military, cargo, sports, rescue, recovery, and break chutes, wherein the overall military parachute market is dominated by the military segment. However, the sports segment is projected to grow at a comparatively higher CAGR during the forecast period of 2015 to 2020, primarily driven by the growth of aero sports. This trend is mainly being witnessed in the North American and European region.

North America dominates; Asia-Pacific to grow at the highest rate

The North American region dominates the global military parachute market; increasing demand for cargo and personal parachutes for air delivery systems are the major drivers for the military parachute market across North America. The U.S. defense force is one of the largest in the world and there has been a continuous increase in the defense spending by the U.S. government. The market in Asia-Pacific is projected to grow at the highest CAGR during the forecast period. The key factors that will drive the growth of APAC military parachute market are the rise in maritime patrol services in the Indian Ocean and South China Sea and the increase in defense expenditures of India and China. The exports of small parachute in China grew by 284% in 2012 compared to 2009 as stated by NISAT. Huge domestic production base and consumption pattern of small parachutes is witnessing a strong growth in the APAC market. 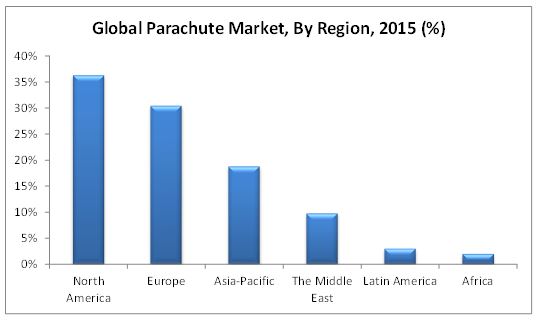 MarketsandMarkets is the worlds No. 2 firm in terms of annually published premium market research reports. Serving 1700 global fortune enterprises with more than 1200 premium studies in a year, M&M is catering to a multitude of clients across 8 different industrial verticals. We specialize in consulting assignments and business research across high growth markets, cutting edge technologies and newer applications. Our 850 fulltime analyst and SMEs at MarketsandMarkets are tracking global high growth markets following the "Growth Engagement Model  GEM". The GEM aims at proactive collaboration with the clients to identify new opportunities, identify most important customers, write "Attack, avoid and defend" strategies, identify sources of incremental revenues for both the company and its competitors.

M&Ms flagship competitive intelligence and market research platform, "RT" connects over 200,000 markets and entire value chains for deeper understanding of the unmet insights along with market sizing and forecasts of niche markets. The new included chapters on Methodology and Benchmarking presented with high quality analytical infographics in our reports gives complete visibility of how the numbers have been arrived and defend the accuracy of the numbers.

We at MarketsandMarkets are inspired to help our clients grow by providing apt business insight with our huge market intelligence repository.