[180 Pages Report] The global food encapsulation market is estimated to account for USD 9.9 billion in 2020 and is projected to reach USD 14.1 billion by 2025, recording a CAGR of 7.5% during the forecast period. The market is primarily driven by the increasing use of encapsulated flavors in the food and beverage industry and the rising adoption of microencapsulation for functional ingredients. 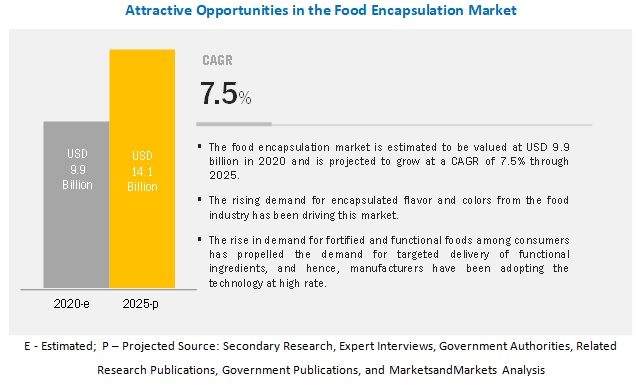 Vitamins and minerals are the most common ingredients encapsulated for functional food and dietary supplements.

Vitamins are functional ingredients that are used in food owing to their specific nutritional properties for varied human body parts. Thus, a targeted and controlled release of vitamins often becomes important, when added as a food ingredient. Thus, encapsulation is majorly adopted for vitamins for its targeted effect. Following vitamins, there has been a growing trend in the encapsulation of flavors to achieve controlled and prolonged release of taste and fragrance of the ingredient.

The market for dietary supplements is projected to record the highest CAGR during the forecast period.

Polysaccharides are the most preferred shell phase for food encapsulation.

The polysaccharides segment accounted for the largest market for shell material in 2018 and is projected to follow the same trend through 2025. Polysaccharides are a composition of repeating monosaccharide units connected by glycoside bonds. Polysaccharides are easily chemically modifiable and provide numerous textures and viscosities. Owing to their enormous molecular structure and ability to entrap bio-actives, polysaccharides are considered the most-suitable building blocks for delivery systems.

In terms of method of encapsulation, ingredients encapsulated through a physical method accounted for the major market share. 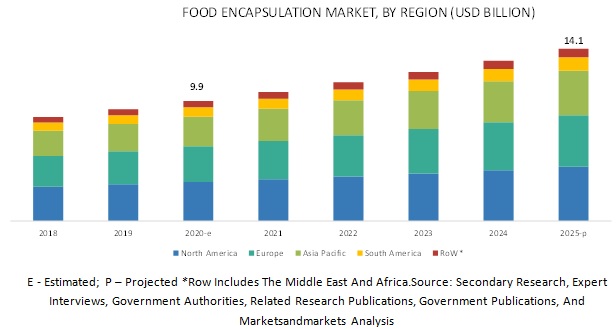 The food encapsulation market in the Asia Pacific region is projected to grow at the highest CAGR from 2019 to 2026.

Factors driving the growth of the Asia Pacific market include the increasing adoption of encapsulated flavors and colors in the beverage and premium food industry. With the rising awareness about the benefits of functional food and dietary supplements among consumers and rising disposable income, consumers have been willing to pay a premium price for value-added products. Thus, manufacturers have been grabbing this opportunity in countries such as China and India to expand their business in the encapsulation market. Also, small enterprises have been delivering generic encapsulated products in the market at competitive prices, which has been further boosting awareness.

Key questions addressed by the report:

The study involved four major activities for estimating the market size of food encapsulation. Exhaustive secondary research was conducted to collect information on the market, peer market, and parent market. The next step was to validate these findings, assumptions, and sizing with industry experts across the value chain through primary research. Bottom-up approaches were employed to estimate the complete market size. Thereafter, market breakdown and data triangulation were used to estimate the market size of the segments and subsegments.

In the secondary research process, various sources such as the Food and Agriculture Organization (FAO), United States Department of Agriculture (USDA), Organisation for Economic Co-operation and Development (OECD), and European Food Safety Authority (EFSA) were referred to, to identify and collect information for this study. The secondary sources also include clinical studies and journals, press releases, investor presentations of companies, white papers, certified publications, articles by recognized authors and regulatory bodies, trade directories, and paid databases.

After arriving at the overall market size from the estimation process explained above, the total market was split into several segments and subsegments. To estimate the overall food encapsulation market and arrive at the exact statistics for all segments and subsegments, the data triangulation and market breakdown procedures were employed, wherever applicable. The data was triangulated by studying various factors and trends from the demand and supply sides. Along with this, the market size was validated using both the top-down and bottom-up approaches.

With the given market data, MarketsandMarkets offers customizations according to client-specific needs.