The global telecom power system market is expected to be valued at USD 4.53 Billion by 2022, growing at a CAGR of 10.26% between 2017 and 2022. This report provides a detailed analysis of the market based on grid type, component, power source, and geography. The aggressive expansion of telecom infrastructure in rural areas, especially in APAC and Africa is driving the telecom power system market.

Years considered for this report

The objectives of the report are:

The research methodology used to estimate and forecast the telecom power system market begins with capturing data on key vendor revenue through secondary sources such as Tower and Infrastructure Providers Association (TAIPA) and International Telecommunication Union (ITU). The vendor offerings are also taken into consideration to determine the market segmentation. A combination of top-down and bottom-up procedures has been employed to arrive at the overall size of the global market from the revenues of key players in the market. After arriving at the overall market size, the total market has been split into several segments and subsegments which have been verified through the primary research by conducting extensive interviews of people holding key positions such as CEOs, VPs, directors, and executives. The market breakdown and data triangulation procedures have been employed to complete the overall market engineering process and arrive at the exact statistics for all segments and subsegments. The breakdown of the profiles of primaries is depicted in the figure below: 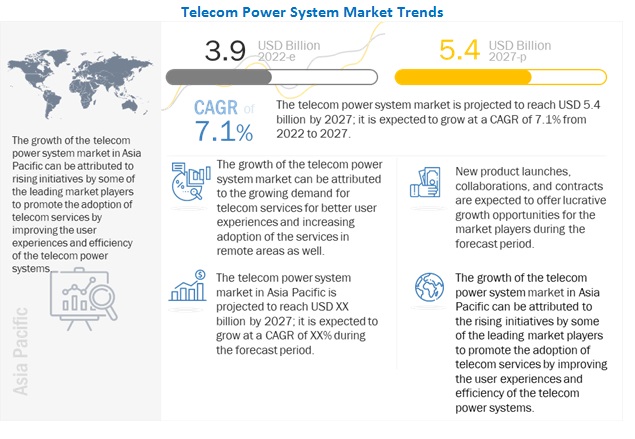 The study answers several questions for the stakeholders, primarily, which market segments to focus on in the next two to five years (depends on the range of forecast period) for prioritizing the efforts and investments.

In this report, the Telecom Power System market has been segmented into the following categories in addition to the industry trends which have also been detailed below:

With the given market data, MarketsandMarkets offers customizations according the company’s specific needs. The following customization options are available for the report:

The global telecom power system market size is expected to be valued at USD 4.53 Billion by 2022, growing at a CAGR of 10.26% between 2017 and 2022. The drivers for this market are the expansion of telecom infrastructure in rural areas, especially in APAC and Africa and the increasing awareness to reduce the carbon footprint of the telecom industry.

Among all the grid types, telecom power system market for off-grid power systems is expected to grow at the highest CAGR during the forecast period. This growth is attributed to the expansion of networks into remote locations by mobile network operators and tower companies to achieve universal coverage.

Of all the power sources, the telecom power system market for diesel-solar systems is expected to grow at the highest CAGR between 2017 and 2022. Diesel-solar hybrid systems reduce the cost of operation and maintenance as well as the cost of logistics by minimizing diesel runtime and fuel consumption. Governments worldwide are offering subsidies for solar PVs and their cost has also decreased.

In terms of the different geographic regions, APAC is expected to hold the largest telecom power system market share in 2017. The reason for this growth is the penetration of telecom towers in rural areas to expand the mobile network to the growing mobile subscriber base and also to improve connectivity. The APAC region has witnessed 3G network expansion and LTE networks have been launched in the APAC countries. The region presents a huge opportunity for mobile network operators (MNO)/tower companies and energy service companies (ESCOs) to work toward deploying green power alternatives for powering telecom sites, reduce operational expenditure, address the infrastructural challenges, and achieve the rollout targets and growth. 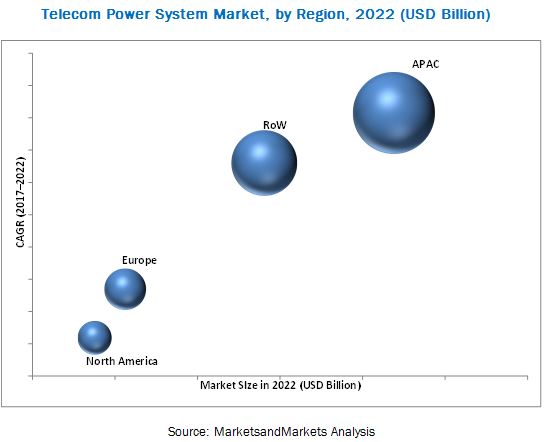 Diesel generators are the preferred source of electrical power for off-grid and standby power applications, such as cellular base stations because of their durability and reliability, but they exhaust harmful environmental pollutants such as carbon monoxide (CO), hydrocarbons (HC), and nitrogen oxide, which is an ozone-depleting emission. Thus, environmental concerns pertaining to telecom towers’ power supply systems due to high utilization of diesel for powering telecom infrastructure is a restraint for telecom power system market.

To speak to our analyst for a discussion on the above findings, click Speak to Analyst of telecom power system market

Hi team, I have interest in your report and would like to have the report brochure or sample for reviewing it. After sharing the brochure, we can discuss about the proceedings.

I am looking for data on number of Off-Grid and Bad-Grid telecom sites in Asia, Africa, and South America by country. Please let me know the price for this data set.