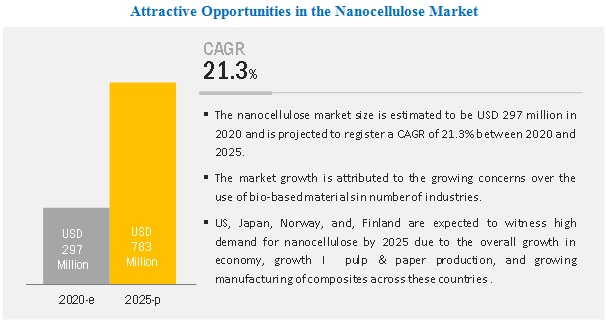 MFC & NFC is expected to grow at the highest rate during the forecast period.

The demand for MFC & NFC is increasing exponentially, mainly due to its nano-scale dimensions and the ability to form a strong entangled nanoporous network. It is growing because of its relative ease of preparation in high yield, high specific surface area, and high strength and stiffness. This bio-based nanomaterial has been widely used in nanocomposites due to its outstanding reinforcing potential

Pulp & paper accounts for the largest share of the overall market

Based on application, the nanocellulose market is segmented as pulp & paper; composites & packaging; biomedical, pharmaceutical & cosmetics; flexible electronics and sensors; and others. Pulp & paper currently is the most extensive application in the nanocellulose market. Nanocellulose can be used as additives in papermaking to produce lighter and stronger paper and board, as it can be used to cut down the production cost. The paper presented through this method has enhanced properties, such as less porosity, higher printing quality, and less transparency.

Europe is expected to account for the largest share of the global market during the forecast period.

The major companies are undertaking agreements and expansions to improve their shares in this market. Companies including Innventia (Sweden), American Process (US), Stora Enso (Finland), and CelluForce (Canada) have adopted various strategies, such as expansions, mergers & partnerships, and agreements between 2017 and 2020. The companies also expanded their plant capacities to increase their production capacities and meet the growing demand for nanocellulose in new applications.

This research report categorizes the nanocellulose market based on type, application, and region.

Based on type, the nanocellulose market has been segmented as follows

Based on application, the nanocellulose market has been segmented as follows

Based on the region, the nanocellulose market has been segmented as follows

In October 2018, Stora Enso (Finland) acquired Cellutech AB (Sweden), a cellulose technology company. This acquisition helped the company to develop nanocellulose materials for packaging applications and strengthen its position in the packaging industry.

In April 2017, American Process Inc. (US), Will & Co (Netherlands), and P.R.G. (Netherlands) agreed to develop, manufacture jointly, and supply nanocellulose reinforced thermoplastic compounds which would offer characteristics such as enhanced mechanical properties. These compounds would help in catering to the demand of European based customers for conventional and biobased plastic compounds.

The study involved four major activities in estimating the current market size of nanocellulose. Exhaustive secondary research was done to collect information on the market, the peer market, and the parent market. The next step was to validate these findings, assumptions, and sizing with industry experts across the value chain through primary research. Both top-down and bottom-up approaches were employed to estimate the complete market size. After that, market breakdown and data triangulation were used to estimate the market size of the segments and sub-segments.

The nanocellulose market comprises several stakeholders, such as raw material suppliers, processors, end-product manufacturers, and regulatory organizations, in the supply chain. The demand side of this market is characterized by the development of pulp & paper, composites, biomedical & pharmaceutical, electronics & sensors, and other applications. Advancements in technology characterize the supply side. Various primary sources from both the supply and demand sides of the market were interviewed to obtain qualitative and quantitative information. Following is the breakdown of the primary respondents:

After arriving at the overall market size using the market size estimation processes as explained above, the market was split into several segments and sub-segments. To complete the overall market engineering process and arrive at the exact statistics of each market segment and subsegment, the data triangulation and market breakdown procedures were employed, wherever applicable. The data was triangulated by studying various factors and trends from both the demand and supply sides in the food & beverage, metal & mining, chemical, pharmaceutical, power generation, and other industries.

Need information on nanocellulose market applications in the field of active packaging.

Understand the scope of Green Coconut Fibers along with available technologies, cost, and business partnership opportunity

looking for market projections, manufacturers, and applications of non-fibers