The DC torque tool market was valued at USD 2.75 Billion in 2016 and is expected to reach USD 3.38 Billion by 2023, at a CAGR of 3.16% between 2017 and 2023. The base year considered for the study is 2016, and the forecast period is between 2017 and 2023. The objective of the report is to provide a detailed analysis of the market based on type, power source, control system, industry, and geography. The report provides detailed information regarding the major factors influencing the growth of the market. The report also gives a detailed overview of the value chain in the ecosystem of DC torque tools and analyzes the market trends based on the competitive leadership microquadrant analysis.

The research methodology used to estimate and forecast the DC torque tool market begins with capturing the data pertaining to the revenue of the companies, through secondary research, such as the European Power Tools Association (EPTA), IEEE journals, Asian Machine Tool Exhibition (AMTEX), and newsletters of leading players. The vendor offerings are also taken into consideration to determine the market segmentation. The bottom-up procedure has been employed to arrive at the overall size of the global market from the revenue of key players. After arriving at the overall market size, the total market has been split into several segments and subsegments, which have been verified through the primary research by conducting extensive interviews with people holding key positions such as CEOs, VPs, directors, and executives. The market breakdown and data triangulation procedures have been employed to complete the overall market engineering process and arrive at the exact statistics for all segments and subsegments. The breakdown of the profiles of primaries is depicted in the below figure: 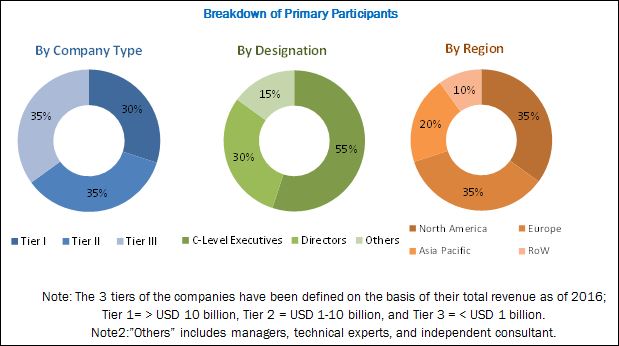 This study answers several questions for the stakeholders, primarily which market segments to focus on in the next 2 to 5 years for prioritizing efforts and investments.

With the given DC torque tool market data, MarketsandMarkets offers customizations according to the company’s specific needs. The following customization options are available for the report:

The DC torque tool market is expected to grow from USD 2.81 Billion in 2017 to USD 3.38 Billion by 2023, at a CAGR of 3.16% between 2017 and 2023. The growth of the market is propelled by various factors such as the increasing sales of commercial and passenger vehicles, the adoption of Industry 4.0 accelerates the use of DC torque tools. Moreover, the advent of DC brushless motors and Li–ion batteries has helped the market to evolve.

The energy industry is expected to drive the growth of the DC torque tool market owing to the huge growth in the wind energy industry. According to the Global Wind Energy Council (GWEC), at the end of 2016, the worldwide total installed capacity of wind energy was 486,790 MW, which has grown about 12% from the previous year. Typically, the wind industry requirement for high torque fastening is fulfilled by pneumatic tools. However, the development of powerful tools and benefits such as quality control, ergonomics, and convenience offered by cordless power tools, especially in offshore wind installation, are some key factors driving the growth of the said market.

The global DC torque tool market is dominated by handheld tools owing to their adoption for various applications in several industries ranging from automotive to consumer electronics. Electric nutrunner, electric screwdriver, and electric torque wrench are some of the hand tools, which are most frequently used. These tools offer more flexibility, better ergonomics, and more power to the weight ratio. Atlas Copco AB (Sweden), Robert Bosch GmbH (Germany), Stanley Black & Decker, Inc. (US), and Ingersoll-Rand plc (Ireland) Apex Tool Group, LLC (US) are some of the key players that are focusing more on the development of handheld fastening tools.

Transducer control DC torque is the close-loop and most direct method of fastening data capturing, while other method calculates the power consumption of the motor, and then computes the torque delivered to fasteners. The motor power consumption can be influenced by the temperature, state of the joint, and performance of entire gear mechanism. Therefore, transducer control DC torque tools offer the most accurate and dynamic torque and angle reading.

Europe held the largest DC torque tool market share in 2016 and is expected to sustain its position in the coming years. Huge wind turbine installation, the presence of major aerospace manufacturers, the well-established automotive industry helped Europe to gain a leading position in the market. Atlas Copco AB (Sweden), Robert Bosch GmbH (Germany), Ingersoll Rand plc (Ireland) are some of the top suppliers of DC torque tools from the said region. APAC is the emerging market for the DC torque tool. According to the OICA, in 2016, the automotive production in APAC was ~54% of total automotive production worldwide and is expected to grow in the near future. Moreover, China and India are the major countries in APAC involved in the development of wind energy. The major driving factors for the growth of the DC torque tool market in APAC are the increased number of manufacturing facilities and aging infrastructure. 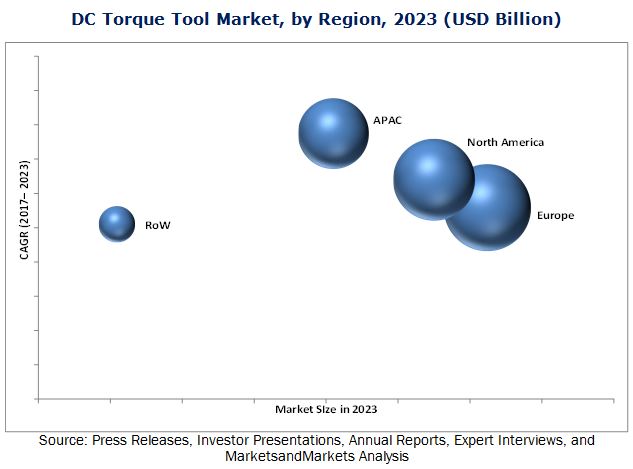 One of the key restraining factors for the DC torque tool market is unsuitability of DC torque tools for harsh environments. Heavy power tools have a torque reaction, which may cause a user wrist injury. Sometimes, prolonged use of fastening tools may overheat the tool.

4 Premium Insights (Page No. - 32)
4.1 Market Opportunities
4.2 Handheld Market for Automotive Industry, By Power Source
4.3 Market for Electronics and Consumer Appliances Industry, By Type
4.4 Market in APAC, By Country and Industry
4.5 Market, By Geography