A retimer is a mixed signal analog/digital device with the capacity to fully recover the data, recover the embedded clock, and retransmit a new copy of the data using a clock. Retimers are protocol-aware devices. Retimer includes a decision feedback equalizer (DFE), a long-tail equalizer (LTE), and a clock-data recovery (CDR) circuit. Retimer. Retimer is a cost-effective option which offers high-speed internet available to all, and it cancels noise thereby compensating for any channel loss.

The global retimer market size is expected to grow from USD XX million in 2022 to USD XX million by 2027, at a CAGR of XX%. The recent shift towards digitalization has driven the demand for retimer in server, storage, and hardware accelerators across many verticals including telecommunication, BFSI, government and healthcare, transportation, education, and retail among others. 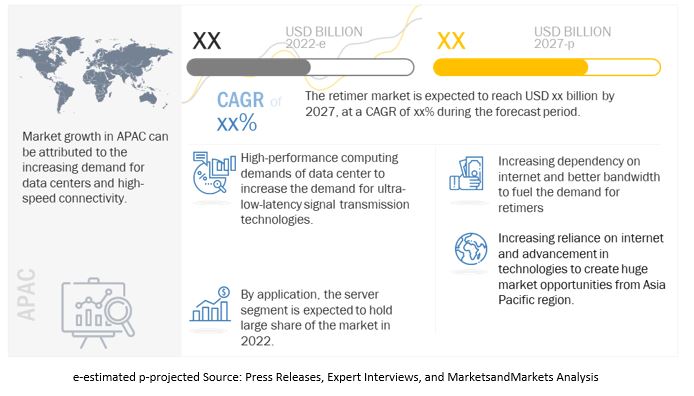 Drivers: Increasing Data Centers to Drive the Demand for Retimers

Given the fact that organizations all around the world rely so much on data, data consumption is rising. Large-scale businesses' investments have led to a significant growth in data centers. Data centers are expanding because of factors like the growing investment in cloud computing, excessive internet consumption, and rising automation across the end-user industries. Retimers at a data center make sure the cables are receiving the cleanest signal possible, regardless of the matter where the signals come from, it cleans them up. The use of retimers is driven by the soaring demand for high-speed, flexible storage capacity.

Consumers around the globe are accustomed to high-speed internet, which has assimilated into the fast-paced lifestyle. As more individuals supported the concept of incorporating internet connections into their homes, bandwidth connections increased during the past decade. As Ethernet data capacity has grown over time, so too has dependence on retimers for better signal quality grown at an unmatched rate. The large data rate and signals complicate things and degrade, which leads to poor network and communication. Retimers improves performance by getting rid of all the jitters and noise in the signal.

The demand for high-speed internet connection is outpacing retimer's existing capabilities which is increasing pressure on competitors. Increase internet latency, sudden jitter, reflection, and crosstalk poses challenge in maintaining integrity of the high-speed internet and cause network problems. There is a subliminal push to advance the existing technology else there could be an impact on the retimer market growth.

Astera Labs (US), Broadcom (US), Parade Technologies (UK), Texas Instruments (US), Intel (US), Analogix, Diodes Incorporated (US), NXP Semiconductors (Netherlands), and Microchip Technology (US) are few key players in the retimer market globally.