[177 Pages Report] In 2020, the ultra-high molecular weight polyethylene (UHMW PE) market is estimated at USD 1.4 billion and is projected to reach USD 2.2 billion by 2025, at a CAGR of 9.4% from 2020 to 2025. The major drivers for the market include increased demand for UHMW PE from the aerospace & defense industry and increased demand for orthopedic implants. However, the availability of substitute act as a challenge for the manufacturers and can hamper the market growth. Currently, there is a demand for flexible and ultra-lightweight fibers for armor and ballistic protection, which can offer high resistance to flex fatigue, vibration damping, and abrasion resistance in comparison to traditional fibers. 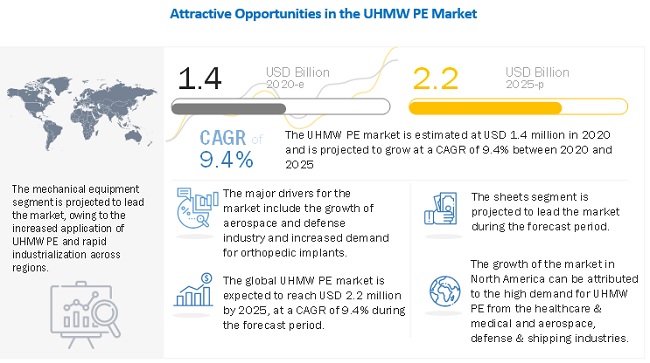 Based on form, the sheets segment is projected to lead the market, during the forecast period

On the basis of form, the sheets segment is estimated to account for the largest share of the UHMW PE market in 2019. This large share is mainly attributed to the extensive use of UHMW PE sheets in the mechanical equipment industry. The segment is also anticipated to grow at a higher CAGR from 2020-2025, owing to the increasing demand from the healthcare & medical end-use industry. The demand for sheets is also high in food production units, wherein large volumes of containers such as cans or bottles need to be guided along conveyors or production lines. These sheets are used in marine applications due to their low moisture absorption. UHMW PE is used in cryogenic components, due to its low operating temperature abilities.

Based on end-use industry, healthcare & medical segment is projected to grow at the highest CAGR in UHMW PE market during 2020-2025

Increasing demand for UHMW PE by the healthcare & medical industry is expected to drive the market across regions. The decline in the age group of people undergoing knee and hip surgeries, the demand for UHMW PE has increased in the healthcare & medical industry. UHMW PE possesses the basic requirements for any medical implant material, which includes biological stability, biocompatibility, toughness, high creep resistance, low friction, and low wear.

Asia Pacific is expected to be the fastest-growing market, owing to the continuous investments for the advancement in the medical sector. UHMW PE is majorly being used in orthopedic plants because of its properties. The growth of the medical industry in Asia Pacific is one of the reasons leading to an increase in the demand for UHMW PE. UHMW PE is also being used in mechanical equipment. The outbreak of COVID-19 has affected countries such as China, Japan, and India. China is the epicenter of this lethal disease. Companies are facing short-term operational issues due to supply chain constraints and lack of site access due to this outbreak.

On the basis of form, the UHMW PE market is segmented as follows:

On the basis of End-Use Industry, the UHMW PE market is segmented as follows:

On the basis of Region, the UHMW PE market is segmented as follows:

What is UHMW PE?

Ultra-high molecular weight polyethylene (UHMW PE) is a thermoplastic having long chains of polyethylene, and a molecular weight of 2-6 million grams per mole. It is synthesized by attaching the monomers of ethylene. During the manufacturing process, UHMW PE can be produced with different molecular weight, bulk densities, average particle size, and particle size distribution. It is widely used in the aerospace, defense & shipment, healthcare & medical, mechanical equipment, and food & beverages end-use industries.

What is the major forms of UHMW PE?

Based on form, the UHMW PE market is segmented into sheets, rods & tubes, fibers, films, tapes, and others. Other forms include powder and granules. In terms of value, the sheets segment accounted for the largest share

What are the major driving factors for UHMW PE?

What is major industry that uses UHMW PE?

Who are the leading UHMW PE provider in the world?

The study involved four major activities in estimating the current market size for ultra-high molecular weight polyethylene  (UHMW PE). Exhaustive secondary research was carried out to collect information on the market, peer markets, and the parent market. The next step was to validate the findings obtained from secondary sources, assumptions, and sizing with industry experts across the value chain through primary research. Both, the top-down and bottom-up approaches were employed to estimate the complete market size. Thereafter, the market breakdown and data triangulation procedures were used to estimate the market size of segments and subsegments.

The UHMW PE market comprises stakeholders such as producers, suppliers, and distributors, and regulatory organizations in the supply chain. The demand side of this market is characterized by developments in end-use industries such as aerospace, defense & shipping, mechanical equipment, healthcare & medical and food & beverages and others. The supply side is characterized by market consolidation activities undertaken by UHMW PE manufacturers. Several primary sources from the supply and demand sides of the market were interviewed to obtain qualitative and quantitative information. Following is the breakdown of primary respondents. 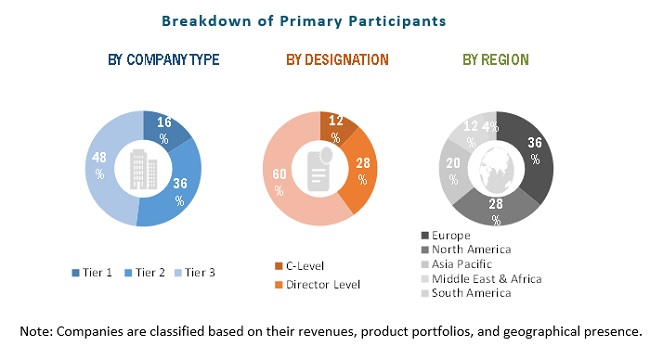 After arriving at the overall market size—using the market size estimation process explained above—the market was split into several segments and subsegments. To complete the overall market engineering process and arrive at the exact statistics of each market segment and subsegment, the data triangulation, and market breakdown procedures were employed, wherever applicable. The data was triangulated by studying various factors and trends from both, the demand and supply sides.

With the given market data, MarketsandMarkets offers customizations according to the specific requirements of companies. The following customization options are available for the report: