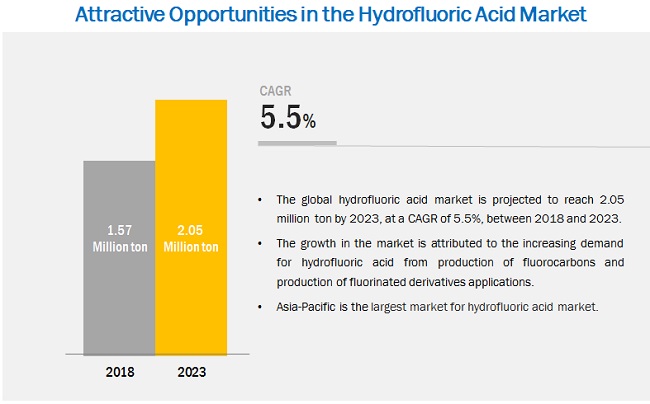 The objectives of the report are as follows:

The top-down and bottom-up approaches were used to estimate and validate the size of the hydrofluoric acid market and to estimate the size of various other dependent submarkets in the overall market. This research study involved the extensive use of secondary sources, directories, and databases such as Hoovers, Bloomberg, Chemical Weekly, Factiva, and other government and private websites to identify and collect information useful for a technical, market-oriented, and commercial study of the hydrofluoric acid market. 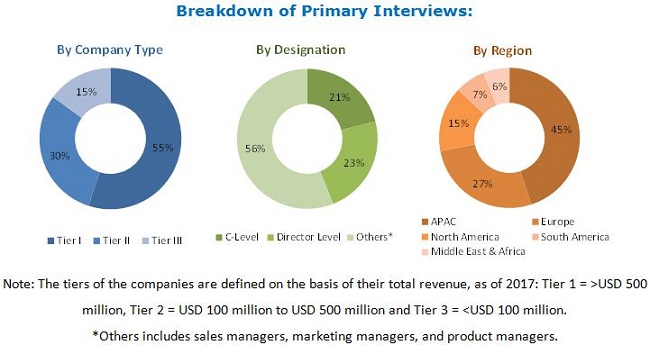 This research report categorizes the hydrofluoric acid market on the basis of grade, application, and region.

On the basis of grade:

The market has been further analyzed for the key countries in each of these regions.

Along with the given market data, MarketsandMarkets offers customizations as per the specific needs of your company. The following customization options are available for this report:

Primary and secondary sources along with MnM repository were used to identify and determine above necessary data. 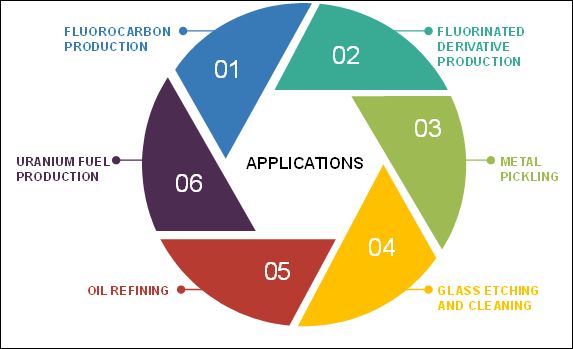 Fluorocarbons are the major types of refrigerants used, globally. It is sub-divided into three types, namely, HCFCs, HFCs, and HFOs. Europe has already phased out HCFCs, and North America is in the process of phasing them out. According to the Montreal Protocol, HCFCs have to be completely phased out by 2030 in non-article 5 parties and by 2040 in article 5 parties. This has resulted in the use of alternatives, such as HFCs and HFOs, which have zero ODP. Hence, fluorocarbon production is expected to remain the dominant application of hydrofluoric acid during the forecast period.

Hydrofluoric acid is used as a precursor to produce several fluorinated derivatives such as fluoride, fluoropolymers, and fluorosurfactants. The significant fluorides produced using hydrofluoric acid are Na3AlF6 and AlF3. These fluorides witness high demand from the steadily growing aluminum industry. The increasing production of fluorides is expected to propel the demand for hydrofluoric acid, globally.

Hydrofluoric acid has a property of dissolving oxides and other impurities, and, hence, used at several stages in the processing of metals such as carbon steel, stainless steel, and titanium. It is also used to separate essential metals from mineral ores and wet etching and cleaning of non-ferrous metal pieces. The growing metal industry, globally, is expected to increase the demand for hydrofluoric acid in metal pickling application.

Hydrofluoric acid is used as glass etching agent in the manufacturing of glass substrate, silicon nitride, and silicon dioxide for the thin-film transistor (TFT) - liquid-crystal display (LCD) and semiconductor industries owing to its ability to dissolve silicates. 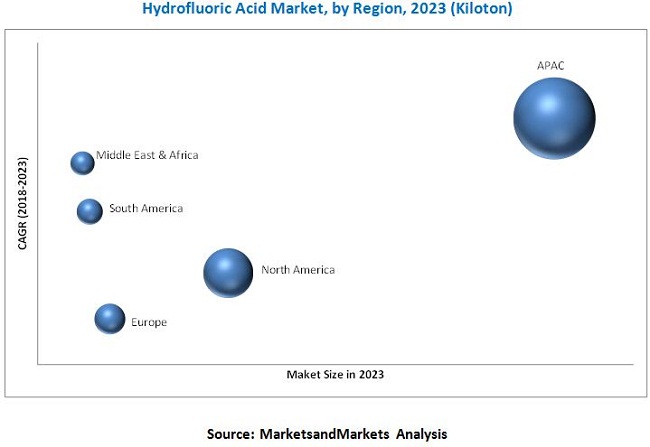 Asia Pacific is estimated to be the largest market for hydrofluoric acid and is projected to register the highest CAGR during the forecast period due to the presence of numerous fluorocarbon manufacturers in the region. China is expected to account for the largest share of the market in Asia Pacific until 2023. Major producers of hydrofluoric acid, such as Dongyue Group (China), Daikin (Japan), Sinochem (China), Yingpeng Chemical (China), and Fluoride Chemicals (China), are located in the Asia-Pacific region. North America accounts for the second-largest share of the global hydrofluoric acid market.

Companies are using the expansion strategy to increase their geographical presence and cater to the increasing demand for hydrofluoric acid products. For example, Dongyue Group used expansion as its major strategy to increase its presence in China. In November 2017, Dongyue Group inaugurated two companies, namely, Shandong Dongyue Public Trading and Guoming Investment Management, in Beijing, China. These companies are involved in trading commodity products, such as chemical products, non-ferrous metals, ferrous metals, and investments in production and financing. This expansion has allowed the company to expand its presence in China.

Companies such as Dongyue Group (China), Honeywell International (US), and Daikin (Japan) adopted the expansions strategy to expand their production capacities and market share in the hydrofluoric acid market between 2016 and 2018.

Fluorides, such as sodium hexafluoroaluminate (Na3AlF6) and aluminum trifluoride (AlF3), are used in aluminum production, globally and are witnessing high demand from aluminium industry. In addition, sodium fluoride and uranium hexafluoride have gained importance in the production of pharmaceuticals and uranium, respectively. Apart from this, the growing demand for fluoropolymers from the automotive and electronics & semiconductor industries is expected to increase the need for hydrofluoric acid to produce them. Thus, the high demand for fluorine compounds from several industries plays a crucial role in driving the hydrofluoric acid market.

Stringent regulations on the use of fluorocarbon refrigerants 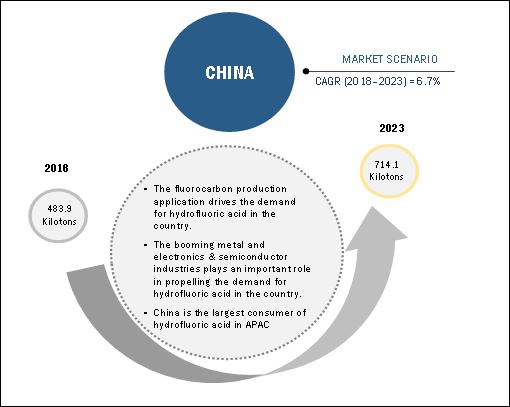 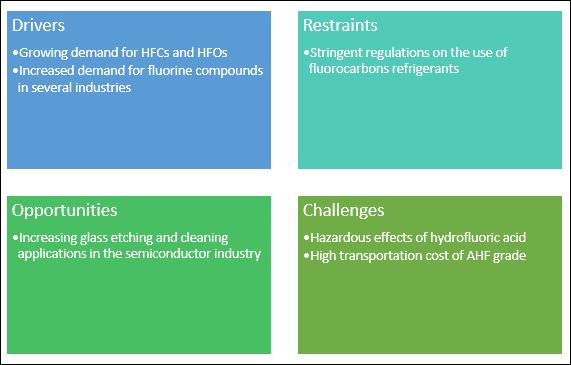