Oxygen scavengers absorb trapped oxygen present inside sealed packaging. Generally, in packaging, artificial preservative and additives are used to prevent spoilage, mold growth, color change, rancidity, loss of nutritive values, and loss of overall product quality. These scavengers protect the product naturally and can help reduce or completely remove the usage of artificial preservatives. Oxygen scavengers prevents growth of aerobic pathogens and spoilage organisms, degradation and rancidity of polyunsaturated fats and oils, oxidation of vitamins A, C, and E, and delays non-enzymatic browning of fruits and some vegetables. The usage of oxygen scavengers makes the product healthier. These factors drive the market for oxygen scavengers globally.

Note1: Micromarkets are the subsegments of the oxygen scavengers market included in the report

Note2: Core competencies of companies are determined in terms of their key developments, SWOT analysis, and key strategies adopted by them to sustain in the market

The top-down and bottom-up both approaches have been used to estimate and validate the size of the global oxygen scavengers market and to estimate the size of various other dependent submarkets. The research study involved the use of extensive secondary sources, directories, and databases such as Hoovers, Bloomberg, Chemical Weekly, Factiva, Commonwealth Scientific and Industrial Research Organization (CSIRO), Securities And Exchange Commission (SEC), American National Standards Institute (ANSI), Organization for Economic Co-operation and Development (OECD), and other government and private websites, to identify and collect information useful for the technical, market-oriented, and commercial study of the oxygen scavengers market.

The figure below illustrates the breakdown of profiles of primary interview participants. 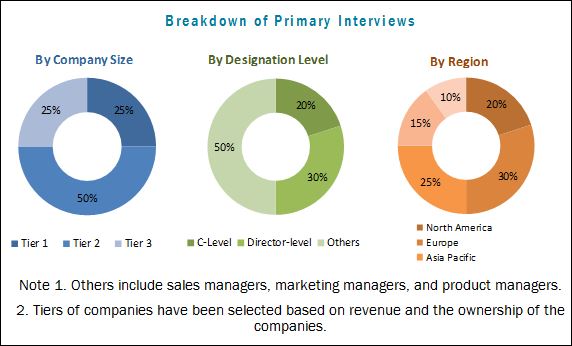 “This study answers several questions for the stakeholders, primarily which market segments they should focus upon during the next two to five years to prioritize their efforts and investments”.

Each region has been further segmented into the key countries in the region.

The oxygen scavengers market is projected to reach USD 2.41 billion by 2022, at a CAGR of 5.1% from 2017 to 2022. The increasing demand for high-quality packaged food is expected to drive the growth of the oxygen scavengers market during the forecast period. The growing awareness regarding the reduction of food wastage and the increased demand for advanced packaging among consumers are expected to further aid the growth of the market during the forecast period.

Based on end-use industry, the food & beverage segment is projected to be the largest segment of the market during the forecast period. Oxygen scavengers are widely used in this industry, as they extend the shelf life of products from 3-4 days to 14 days or more. 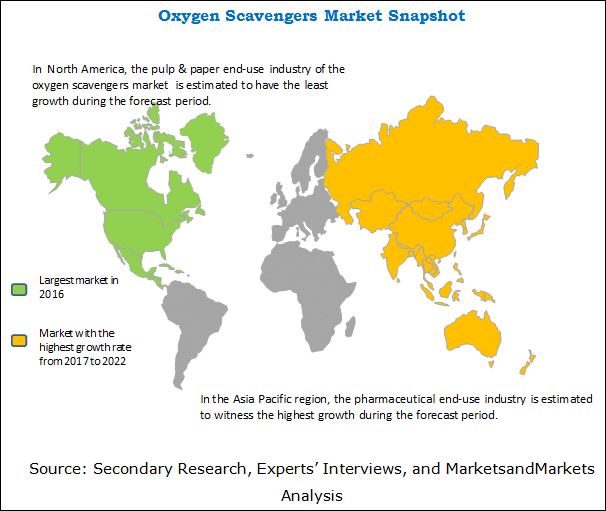 North America is expected to be the largest market for oxygen scavengers during the forecast period. North America is the largest consumer of packaged food and pharmaceutical products. Furthermore, factors such as a large industrial base, and high disposable income and high standard of living of the population in the region is expected to fuel the growth of the oxygen scavengers market in North America. The oxygen scavengers market in Asia Pacific is projected to witness the highest growth during the forecast period, owing to the rising standard of living, which is expected to boost the demand for packaged food in the region during the forecast period. In addition, government initiatives and policies to attract investments from various international companies will boost the growth of various end-use industries of oxygen scavengers and support the growth of the market in the region.

Food & beverage is one the major end-use industries for oxygen scavengers. Oxygen scavengers are mainly used to extend the shelf life and maintain the natural properties of food products. Oxygen scavengers protect the food products against oxygen degradation, thus increasing the shelf life, customer acceptability, and food safety. With rising disposable income and improving lifestyle standards, the consumption of processed food is also increasing. According to Wageningen Economic Research and United Nations Industrial Development Organization (UNIDO), Europe is the world’s largest food & beverage industry followed by China and the U.S. in terms of turnover. The Economist Intelligence Unit stated that there will be an increase by 60% in global demand for food by 2050. With the increasing growth of the food & beverage industry, the use of oxygen scavengers will also rise.

Oxygen scavengers such as hydrazine and iron oxides are harmful to health. For example, hydrazine may result in irritation of the eyes, nose, and throat; dizziness; a headache; nausea; pulmonary edema; seizures; and coma. Exposure to iron oxide can cause fever, body aches, chest tightness, cough, and pneumoconiosis. These health hazard related to oxygen scavengers have led to the implementation of various regulations pertaining to the handling of harmful chemicals. This is one of the major challenges for the growth of the oxygen scavengers market in the coming years.

Key players, such as Mitsubishi Gas Chemical Company (Japan), BASF SE (Germany), Ecolab Inc. (US), Clariant Ltd. (Switzerland), and Kemira OYJ (Finland) operating in the oxygen scavengers market adopted both organic as well as inorganic growth strategies between 2012 and 2017 to strengthen their position in the market. New product developments/product showcases and mergers & acquisitions were the major growth strategies adopted by market players to enhance their regional presence and meet the growing demand for oxygen scavengers in emerging economies.