The report analyzes and forecasts the market size, in terms of volume (units and 000’units) and value (USD million), of the market. The report segments the market and forecasts its size, by volume, on the basis of vehicle type, type, and region. It also forecasts the market, by value, for component segment. The report also provides a detailed analysis of various forces acting in the market (drivers, restraints, opportunities, and challenges). It strategically profiles the key players and comprehensively analyzes their market shares and core competencies. It also tracks and analyzes competitive developments such as joint ventures, mergers & acquisitions, new product launches, expansions, and other activities carried out by key industry participants.

The figure given below illustrates the break-up of the profile of industry experts who participated in primary discussions.

The ecosystem of the electric vehicle range extender market consists of tier I suppliers such as Magna International (Canada), MAHLE (Germany), Rheinmetall (Germany), Plug Power (US), and AVL (Austria).

Markets and Markets offers the following customizations for this market report:

The electric vehicle range extender market is estimated to be 218,129 units in 2018 and is projected to reach 479,027 units by 2025, at a CAGR of 11.89% during the forecast period. Increasing demand for driving range extension of electric vehicles is the key factor driving the market. 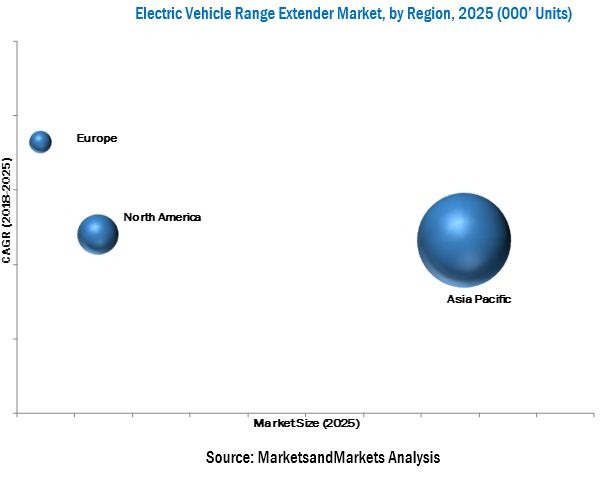 Increasing developments for the extension of the driving range of BEVs and enhanced focus of OEMs towards reducing the price of the battery are the key restraints for the growth of electric vehicle range extender market. OEMs such as Nissan (Japan), Mahindra (India), Volkswagen (Germany), General Motors (US), Tesla (US), and others are focusing towards increasing the driving range of an electric vehicle with the help of efficient batteries. In addition, battery manufacturers are also focusing towards economies of scale for reducing the battery price. These factors can hinder the growth of the market.

Rheinmetall was founded in 1889 and is headquartered in Dusseldorf, Germany. The company operates in two sectors, namely, automotive and defense. The company’s automotive segment specializes in engine components and related services. It supplies modules, pistons, bearings, actuators, valves, pumps, and components for air supply, emission control, cooling, and lubrication to the OEMs. The company offers heater/cooler modules for extending the driving range of electric buses under the automotive segment. The company is working with FEV (Germany) for testing a range extender for electric vehicles. In January 2013, the company successfully tested electric vehicle range extender FIAT 500 with FEV. The company employed 21,610 people worldwide as of December 2017.