Years considered for the study are as follows:

The major objectives of the study are as follows:

During this research study, major players in various regions have been identified, and their offerings, regional presence, and distribution channels have been understood through in-depth discussions. To find the overall market size, top-down and bottom-up approaches have been used to estimate the sizes of other individual markets by using percentage splits from secondary sources such as Hoovers, Bloomberg Business, Factiva, and OneSource and primary research. The entire procedure includes the study of the annual and financial reports of the top market players and extensive interview of industry leaders such as CEOs, VPs, directors, and marketing executives for key insights (both qualitative and quantitative) pertaining to the market. The figure below shows the breakdown of primaries on the basis of the company size, designation, and region conducted during the research study. 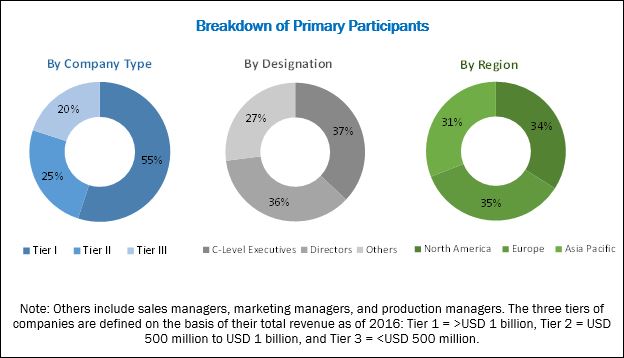 With the given market data, MarketsandMarkets offers customizations according to the client’s specific needs. The following customization options are available for the report:

The overall EUV lithography market is expected to increase from USD 2.98 billion in 2018 to USD 10.31 billion by 2023, at a CAGR of 28.16% from 2018 to 2023. The trend of miniaturization and reduction in process complexity and cost the factors driving market growth.

The market for foundry is expected to grow at a higher CAGR during the forecast period. Usually, the volume of wafer processing at foundries is higher than that at IDMs. The foundry has a wide variety of requirements to address different customers. For instance, TSMC (Taiwan), a leading pure-play foundry, holds the largest revenue for wafer fabrication. On top of that, the increasing demand for advanced packaging for miniaturized devices is expected to be the key driver for the adoption of EUV lithography in foundries.

The market in APAC is likely to account for the largest share in 2018. Major drivers for the rapid growth of the EUV lithography market in APAC are the growing number of wafer processing capability and increasing demand for miniaturized devices. TSMC (Taiwan), the world’s leading foundry acquiring more than 50% of the revenue, has started investing in the expansion of its wafer-processing capability and has planned to invest in EUV lithography. The foundry holds the highest number of wafer-processing capabilities than any other leading players in the semiconductor manufacturing industry. 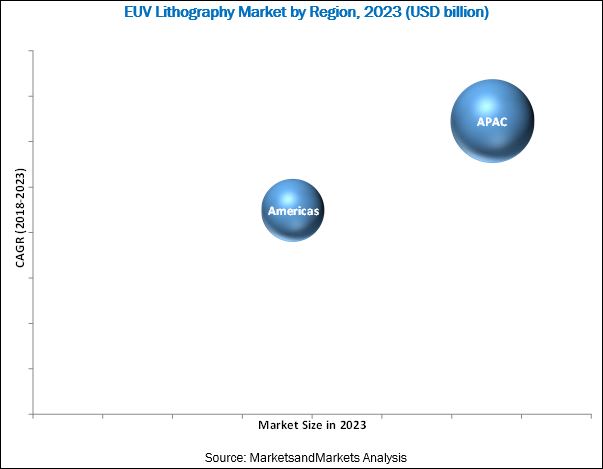 However, the high price of EUVL systems is restraining the growth of the EUV lithography market.  The high price of systems is mainly owing to huge R&D investments made for developing Extreme Ultraviolet Lithography (EUVL) systems equipped with tools of high precision.

ASML Holding N.V. (ASML) (Netherlands) is the only provider of EUV lithography systems and is a monopoly in market. Some of the leading players involved in the advanced lithography market include Nikon Corporation (Nikon) (Japan) and Canon Inc. (Canon) (Japan). ASML has been at the top position because of its wide contribution to market share. The company develops various lithographic techniques such as Extreme Ultraviolet Lithography (EUVL), Argon Fluoride Laser Immersion (ArFi), ArF Dry, Krypton Fluoride Laser (KrF), and I-line. At present, the company is the only supplier of EUVL equipment in the market. The company focuses on developing advanced and cost-effective semiconductor equipment to help create smaller and powerful chips. To create the significant value in its offering, the company designed a holistic lithography approach by combining scanner, metrology, and software together.

EUV Lithography Market
Published Date: Jun 2018 | Report Code: SE 6398
Inquiry Before Buying Request Sample
REQUEST FORM
By clicking the "Submit" button, you are agreeing to the Terms of Use and Privacy Policy.