COVID-19 had a stagnating effect on the green hydrogen market. Projects under development continued to gather investments. Many European and Asian countries have continued to announce new projects and feasibility studies with different technologies. The major impact of COVID-19 in the green hydrogen market was that it delayed the projects as the supplies for raw materials got disrupted due to lockdowns. The market for green hydrogen has finally reached the pre-commercialization level and is ready to play a vital role in decarbonizing the planet.

Increasing use of green hydrogen in the mobility industry

As the world is moving towards net zero emission goals, it is getting ready to change the way it moves. The mobility industry is developing vehicles that would utilize hydrogen directly in fuel cells or in internal combustion engines. Hydrogen based forklifts have already been developed and are being utilized in a few industries across Europe, APAC and North American regions. The countries are planning to more than double the number of such hydrogen based vehicles by  2030.

Increasing investments by the government in establishing green hydrogen ecosystems

The governments of many developed countries are coming forward in developing infrastructure for green hydrogen. This is majorly happening in Europe followed by Asia. The development of infrastructure will facilitate manufacturers to expand their reach and capacity, which will assist them in lowering the price of green hydrogen. The involvement of the governments of the respective countries is very crucial for developing an ecosystem that accepts green hydrogen as an alternate fuel.

In the present scenario, hydrogen is produced at locations where it is to be used. The lack of need for transportation has hence left the hydrogen market unexplored. Less than 8,000 km of pipeline has been installed worldwide, with 2,600 km in the US alone. With its European Hydrogen Backbone (EHB) initiative, Europe plans to install 39,700 km of hydrogen pipeline by 2040. Nearly 69% of this will be repurposed natural gas lines, and the rest will be newly established. Even after these, the infrastructure seems very small compared to more than 3 million km of natural gas line in operation today.

Europe has been investing heavily in the green hydrogen projects. The European Hydrogen Backbone project is underway to develop nearly 40,000 km of dedicated hydrogen pipeline. This is boosting the investment in green hydrogen in the region. Major automotive manufacturers in the European region, such as Porsche, Ducati, BMW, and Audi, are focusing on the downsizing concept of car engines and manufacturing lightweight and fuel-efficient engines, which will also drive up the growth of the green hydrogen market. The European Union Automotive Fuel Economy (UNEP) standard has challenged automotive OEMs to decrease carbon emissions by using lightweight materials, which is further driving the market in this region. 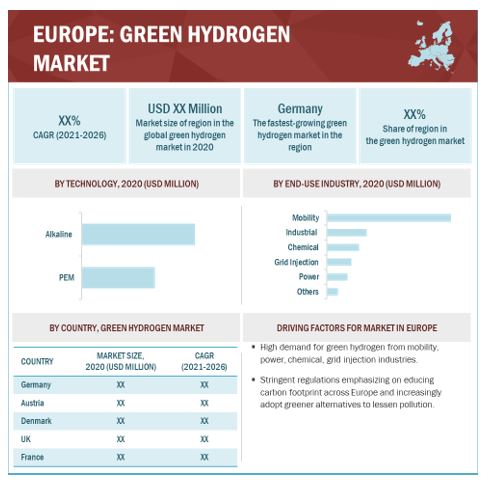 The key players in the global green hydrogen market are:

Based on technology, the green hydrogen market has been segmented as follows:

Based on renewable source, the green hydrogen market has been segmented as follows:

Based on end-use industry, the green hydrogen market has been segmented as follows:

Based on region, the green hydrogen market has been segmented as follows:

How big is the Green Hydrogen Market?

What is the growth rate of Green Hydrogen Market?

Green Hydrogen Market grows at a CAGR of 58.0% during the forecast period.

What are the factors influencing the growth of the green hydrogen market?

High demand from mobility due to superior performance with low zero carbon emission of green hydrogen has driven the market.

Which is the fastest-growing region-level market for green hydrogen?

What are the factors contributing to the final price of green hydrogen?

Energy costs plays a vital role in the costs along with manufacturing technology.

What are the challenges in the green hydrogen market?

High initial costs and underdeveloped market are the major challenges.

Which energy based green hydrogen holds the largest market share?

Wind energy based green hydrogen, in terms of value and volume hold the largest share due to lower energy cost.

How is the green hydrogen market aligned?

The market is relatively new and growing at a very fast pace. It is a potential market and many manufactures are planning business strategies to expand their business or reduce their carbon footprint.

Who are the major manufacturers?

What are the major end use industry for green hydrogen?

What is the biggest restraint in the green hydrogen market?

*Details Might Not Be Captured in Case of Unlisted Companies.
Note: This is the tentative list, we will provide you the company profiles of major companies in this market.

The study involved two major activities in estimating the current market size for green hydrogen market. Exhaustive secondary research was done to collect information on the market, peer market, and parent market. The next step was to validate these findings, assumptions, and sizing with industry experts across the value chain through primary research. Both top-down and bottom-up approaches were employed to estimate the complete market size. Thereafter, market breakdown and data triangulation procedures were used to estimate the size of market segments and subsegments.

The green hydrogen market comprises several stakeholders such as raw material suppliers, processors, end-product manufacturers, and regulatory organizations in the supply chain. The demand side of this market is characterized by the development of various industries such as mobility, power, chemical, industrial, grid injection and others. The supply side is characterized by advancements in technology and diverse applications. Various primary sources from both the supply and demand sides of the market were interviewed to obtain qualitative and quantitative information.

Following is the breakdown of primary respondents: 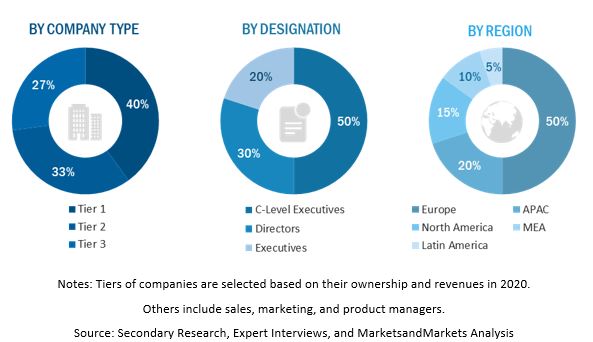 After arriving at the overall market size using the market size estimation process as explained above, the market was split into several segments and subsegments. To complete the overall market engineering process and arrive at the exact statistics of each market segment and subsegment, the data triangulation, and market breakdown procedures were employed, wherever applicable. The data was triangulated by studying various factors and trends from both the demand and supply sides in, mobility, power, chemical, industrial, grid injection and other end-use industries.