The adoption of mining automation in various mineral ore sites has increased the number of strategic partnerships between mining automation equipment vendors and other communication systems providers. For instance, Australia is the member economy of Asia-Pacific Economic Corporation (APEC) that receives a large proportion of its income from mining. In June 2016, BHP Billiton Ltd. (Australia), a leading mining company, awarded a contract to Atlas Copco AB (Sweden) for autonomous upgrade packages for 18 drill rigs. The automation of drill rigs has helped BHP Billiton to significantly increase the safety of its personnel at the mine sites and increase the productivity and efficiency of their mining operations in Pilbara, Australia.

The objective of the report is to provide a detailed analysis of the mining automation market based on technique, type, workflow, and geography. The report provides detailed information regarding the major factors influencing the growth of the market. The report also gives a detailed overview of the value chain in the market and analyzes the market trends.

The research methodology used to estimate and forecast the mining automation market begins with capturing data on key vendor revenue through the secondary research such as International Society of Automation (ISA), Control System Integrators Association (CSIA), Australian Robotics & Automation Association (ARAA), National Mining Association (NMA), press releases, investor relation presentations, and annual reports. The vendor offerings are also considered to determine the market segmentation. The bottom-up procedure has been employed to arrive at the overall size of the global mining automation market from the revenue of key players. After arriving at the overall market size, the total market has been split into several segments and subsegments, which have been verified through primary research by conducting extensive interviews with people holding key positions such as CEOs, VPs, directors, and executives. The market breakdown and data triangulation procedures have been employed to complete the overall market engineering process and arrive at the exact statistics for all segments and subsegments. The breakdown of the profiles of primaries is depicted in the figure below:

“This study answers several questions for the stakeholders, primarily which market segments to focus on in the next 2 to 6 years for prioritizing efforts and investments.”

This research report categorizes the overall mining automation market segmented on the basis of technique, type, workflow, and geography.

With the given market data, MarketsandMarkets offers customizations according to the companies’ specific needs. The following customization options are available for the report.

The mining automation market is expected to grow from USD 2.22 Billion in 2017 to reach USD 3.29 Billion by 2023, at a CAGR of 6.77% between 2017 and 2023. Key factors such as the increasing need for worker safety, the growing requirement improvement in mining productivity, and the reduction in operating costs are driving the market growth.

The mining automation market has been segmented on the basis of technique, workflow, type, and geography.

The autonomous haulage mining process segment accounted for the largest market size in 2016. Hauling of ore from the mining pit to the dumping point is one of the most important and capital-intensive activities in mining operations. A continuous and efficient hauling cycle is necessary for the overall productivity of mining companies. Advantages such as the improved safety and productivity, the reduced maintenance cost, the efficient fuel consumption, the increased tire life, and the lesser downtime are achieved by automating the haulage processes inside a mine. The increasing implementation of digitized and integrated technologies such as GPS, advanced software,  wireless communications, and electronic controls have made autonomous hauling highly competent.

Mining equipment are expected to continue to account for the largest market size during 2017–2023. With advancements toward the successful implementation of autonomous haul trucks in mine sites, mining equipment manufacturing companies are beginning to innovate their product offerings. For instance, in September 2016, Komatsu Ltd. (Japan), a leading manufacturer of mining equipment, launched a new version of its autonomous haul truck. The new product, also known as “innovative autonomous haulage vehicle,” has a cabless structure to maximize the advantages of unmanned operations in challenging conditions. This innovative vehicle provides high-performance traveling in forward as well as reverse direction by distributing equal load to the 4 wheels when the vehicle is loaded and unloaded and by adopting 4-wheel drive, retarder, and steering. The new unmanned vehicle technology would enable mining operators to improve their productivity further. 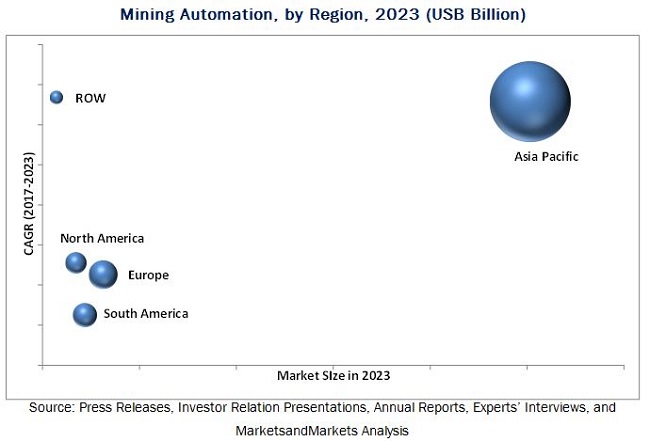 Asia Pacific held the largest share of the mining automation market in 2016. Asia Pacific has immense natural reserves distributed among the countries throughout the region. APAC is estimated to become the largest market for mining equipment and implementation of mining automation technologies globally. The reason for this trend is the increased use of automated mining equipment by leading exploration and mining companies such as Rio Tinto, FMG Group, and BHP Billiton. These mining companies have started using automated mining equipment in their mine sites in the Western region of Australia. Moreover, the increasing digitization of mines and globalization of economies have attracted significant investments from the mining companies all over the world.

Top mining automation companies that provide equipment software and network services globally are Atlas Copco (Sweden), Caterpillar (US), Hexagon (Sweden), Komatsu (Japan), and Sandvik (Sweden). These companies are focusing on product launches and developments, acquisitions, and collaborations strategies to enhance their product and service offerings and expand their business.